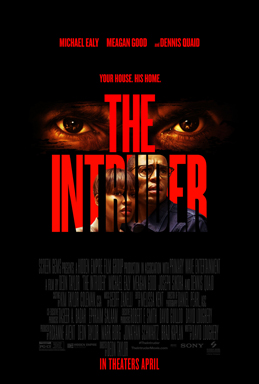 I am someone who judges a film based on what it aims for and not on some lofty sliding scale. As such, I can look on The Intruder was bemused pleasure, accepting that it is trash. Granted, it's poor trash, so much so that it would have benefited tremendously if it had embraced its trashiness rather than even try to be serious. However, as almost idiotic pieces of useless entertainment go I cannot find it in my heart to beat up on The Intruder much.

Successful entrepreneur Scott Russell (Michael Ealy) and his wife Annie (Meagan Good) are looking for a country home to escape San Francisco. They think they have found the perfect place in Napa Valley: a large home currently owned by Charlie Peck (Dennis Quaid). Both Charlie and his home have fallen on hard times ever since the death of his wife two years before.

After some negotiating the Russells buy the house, but Charlie seems never to actually leave. He keeps telling them he'll soon move in with his daughter in Florida but he keeps showing up. Charlie sometimes helps around the house: cutting the grass and setting up the Christmas lights. Scott is growing more alarmed at Charlie's intrusive nature but Annie keeps insisting he's just a nice man who is a little lonely and means well.

Charlie, however, does not mean well at all. Pathologically possessive about the house he soon becomes more fixated on Annie. Charlie's growing derangement puts the Russells and their friends in danger until reaching a brutal climax where not everyone will come out alive.

As I said, The Intruder could have benefited tremendously from a little more camp given David Loughery's cliched screenplay. It is one of those films that depend on the characters being amazingly stupid, particularly poor Annie who is stubbornly foolish when it comes to Charlie's behavior.

No matter how often Charlie shows up unannounced or how often Scott's concerned are justified, Annie continues to insist that the very odd old white guy running around their home and popping up at all hours is harmless.

Bless Good for not breaking out into fits of laughter at Annie's inanity. One has to give her credit for trying to make her into even a remotely rational human being given the character as written is really, really dumb.

The Intruder loves to delve into standard thriller bits: the evil figure popping out of the shadow unseen by the others, random strangers offering important information that furthers the plot, the 'wacky' best friends who you know are there to be killed. The film to its credit makes said 'wacky' best friend Mike (Joseph Sikora) so unlikable that at least I was rooting for Charlie to get rid of him. Never was the term 'token white guy' so apropos to something as silly as The Intruder.

We even get suggestions that The Intruder borrows from other films: I could see bits that were reminiscent of Straw Dogs and The Shining, though why they went this route is unexplained.

The film almost delights in throwing things in that not only have little if anything to do with whatever the actual plot is but just as quickly forgets about them. There is a vague subplot about a tryst Scott had when he and Annie were engaged potentially repeating itself that just came and went. There is another about Charlie's daughter that similarly came and went. We are told that Scott has an aversion to guns, so we know what will happen in the end. Said 'wacky' best friend Mike, who no surprise is killed off (much to my delight) has a girlfriend we've seen, but no reason is given why she is apparently unconcerned that Mike has disappeared.

Perhaps she was just happy to be rid of Mike. It would have made things more interesting if Charlie had seduced Mike's girlfriend Rachel (Alvina August) or vice versa.

I really do think the cast and director Deon Taylor would have done better to have made The Intruder almost a spoof rather than even bother trying to make this serious. It appears Dennis Quaid opted to try and make Charlie into a camp figure with his obvious "I'm CREEPY!" performance. Ealy appears to underplay his role as almost a counterweight to Quaid's all-in bonkers manner.

Again, as I look at The Intruder, I could almost find myself enjoying it for its desperate efforts to try and be good. It isn't: the cliches and idiocy of just about everyone in the film pushes it down. The Intruder is mindless, hokey silliness but not quite fun enough for me to recommend unless it is to actively ridicule it.