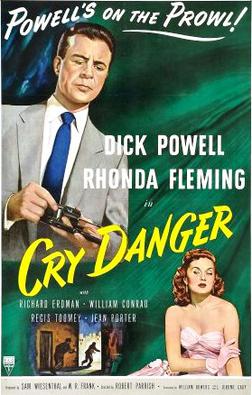 Cry Danger is a very simple story both in terms of budget and narrative. However, these two are pluses in that it keeps things simple. Cry Danger has all the elements of great noir: revenge, snappy, cynical dialogue and a group of low-class characters scraping out life in the shadows.

Rocky Malloy (Dick Powell) just got out of prison after serving five years of a life sentence for armed robbery and murder after a surprise witness collaborated his alibi. That witness, a wounded Marine named Delong (Richard Erdman) admits what Rocky knows: he wasn't one of the Marines with him that night. So why did he corroborate Rocky's story? Delong thinks Rocky knows where the holdup money is.

Rocky insists he doesn't because he didn't pull the job, neither did his best friend Danny, who got a lesser sentence. With Delong's help, he now sets out to track down those responsible for locking them both up.

He meets up with Nancy (Rhonda Fleming), his old flame who later married Danny. Rocky won't mess around with Nancy despite their past, keeping to his own code of honor. Delong quickly falls for Darlene LaVonne (Jean Porter), part-time model, full-time pickpocket and fellow resident of the trailer park Nancy lives in while waiting for Danny to get out on parole.

Rocky's private investigation takes him back to Castro (William Conrad), a bookie whom Rocky thinks was the real criminal. Castro for his part tries to pull a fast one on Rocky, but no dice, with Rocky getting unlikely help from Lt. Cobb (Regis Toomey), who thinks Rocky's up to no good and keeps his eye on him. The twists and turns as Rocky gets to the truth involve attempted hits, innocents dying and dames turning out to be duplicitous for the dupes who fall or fell for them.

Cry Danger has as its central point Dick Powell, whose film noir characteristic whichever side of the law he is in is of simple unflappability. Powell's screen image is one of two: the baby-faced crooner or the beaten-down cynic. It's a credit to him as an actor that he could do both with equal ease.

In Cry Danger, he does very little but he communicates so much in his staccato delivery and almost expressionless face. Only once does he seem genuinely albeit slightly surprised when he finds that his winnings from Castro on a 'hot racing tip' end up being 'hot money', part of a larger frame-up. Powell's Rocky can maintain that cool, calm and collected manner because his Rocky expects the world to be dark, ugly, cynical and heartless, so he behaves as such.

Powell as Rocky sees the world through a glass darkly, a world where the pretties of dames ain't nothing but a broad who will bring you down. His speaking manner is distinct: short, direct, low-key. It is so effective that one cannot help attempting to imitate it, though the imitation is more of his delivery than his voice, which he keeps in a slight monotone save for any sharp quips which can be slightly more overt.

First-time director Robert Parrish not only has Powell deliver a strong performance, but he also does that with the whole cast. Porter's Darlene is not a cool femme fatale but almost a ditzy blonde who is pulling the wool over men's eyes. She is hardly evil but almost sweet in her own way, more a pretty criminal than a petty one. Fleming too is outstanding as Nancy, the woman who loves Rocky and seems to want the best for him. She is the complete opposite of the femme fatale, apparently the only genuine light in this cruel, cruel world.

Erdman is if not the actual comic relief more the alcoholic who stumbles into situations. He has some of the wittiest lines in Cry Danger, which is some ways quite funny. When Rocky asks him why he lied about being the alibi, Delong almost sighs and says, "Occasionally, I always drink too much". After Darlene chides him for starting to drink in the morning, he retorts something along the lines of, "Listen, if you're an alcoholic you have to start early".

Other performances, even small ones, are excellent. While Conrad being cast as a Hispanic seems a wild stretch, he seems fit for the sleazy Castro, a man whose very name can strike fear in anyone save Rocky. When finally cornered and threatened with a little Russian roulette, Conrad demonstrates the fear of someone who has never been vulnerable.

While her role is relegated to one scene, Joan Banks as Alice, the widow of a potential clue rolls with a mix of cynicism and fear. "I'd like to see your husband," Rocky says. "That's not very flattering," she retorts. In their flirtation dance she and Powell do excellent work.

Cry Danger is filled with crackling film noir dialogue from every character, even the lawman. "You're alive on a rain check," Cobb tells Nancy after a case of mistaken identity. While the economy in Cry Danger is obvious in its small number of locations, the film has other pluses: fast pacing, excellent performances and some shots that are standouts. The POV in the Russian roulette sequence is highly effective and inventive.

Cry Danger is a sharp example of film noir: a story of desperate men and women with a central character that while cynical has his own code that he adheres to. He won't be a patsy or sucker for anyone either with a gun or with shapely legs.  Alluring and lurid, these suckers and potential suckers have to watch out for the guys who want to do them in or for those skirts up to no good.