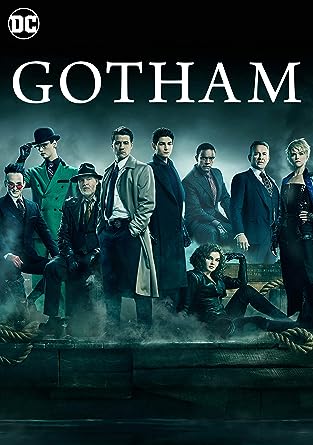 The premise, as I understand it, was around not Bruce Wayne (David Mazouz) but rookie Detective Jim Gordon (Ben McKenzie). That isn't a bad idea in and of itself, but the problem is that we start with the Wayne murders and poor Bruce surviving it. It is hard to divorce yourself into being a Batman-less prequel when you start your first episode with the future Batman.

I wonder now if perhaps the Bruce-Gordon meeting, a central part of the Batman mythos, could instead have been a season finale. If you think on it, this would have allowed for Gordon to run up against issues he would inevitably face: corruption, a shady partner in Harvey Bullock (Donal Logue), and even a future villain or two. We know that Gordon and Bruce are fated to meet, but in retrospect I think Gotham made a terrible mistake in tying itself to the beginning of the Batman story rather than marking that for a latter event.

I think Gotham Season One had a bit of an identity crisis. While I did enjoy the episodes and marveled at how Gordon's girlfriend Barbara Kean (Erin Richards) went from an insufferably boring figure to this delightfully wicked woman, at times it felt it should have been titled Law & Order: Gotham. It was on occasion more about the case-of-the-week than the evolution of the rookie to eventual Commissioner Gordon.

Starting this way also made things a bit cumbersome for the future Rogues Gallery. Apart from Selina Kyle (Camren Bicondova) who had to be around Bruce's age the rest of the cast was essentially old enough to be Bruce's father. I had a coworker dead-set against Gotham who persistently ridiculed the show by saying that Batman would be fighting a group of senior citizens. While it never got to that level, the age discrepancy was an issue. 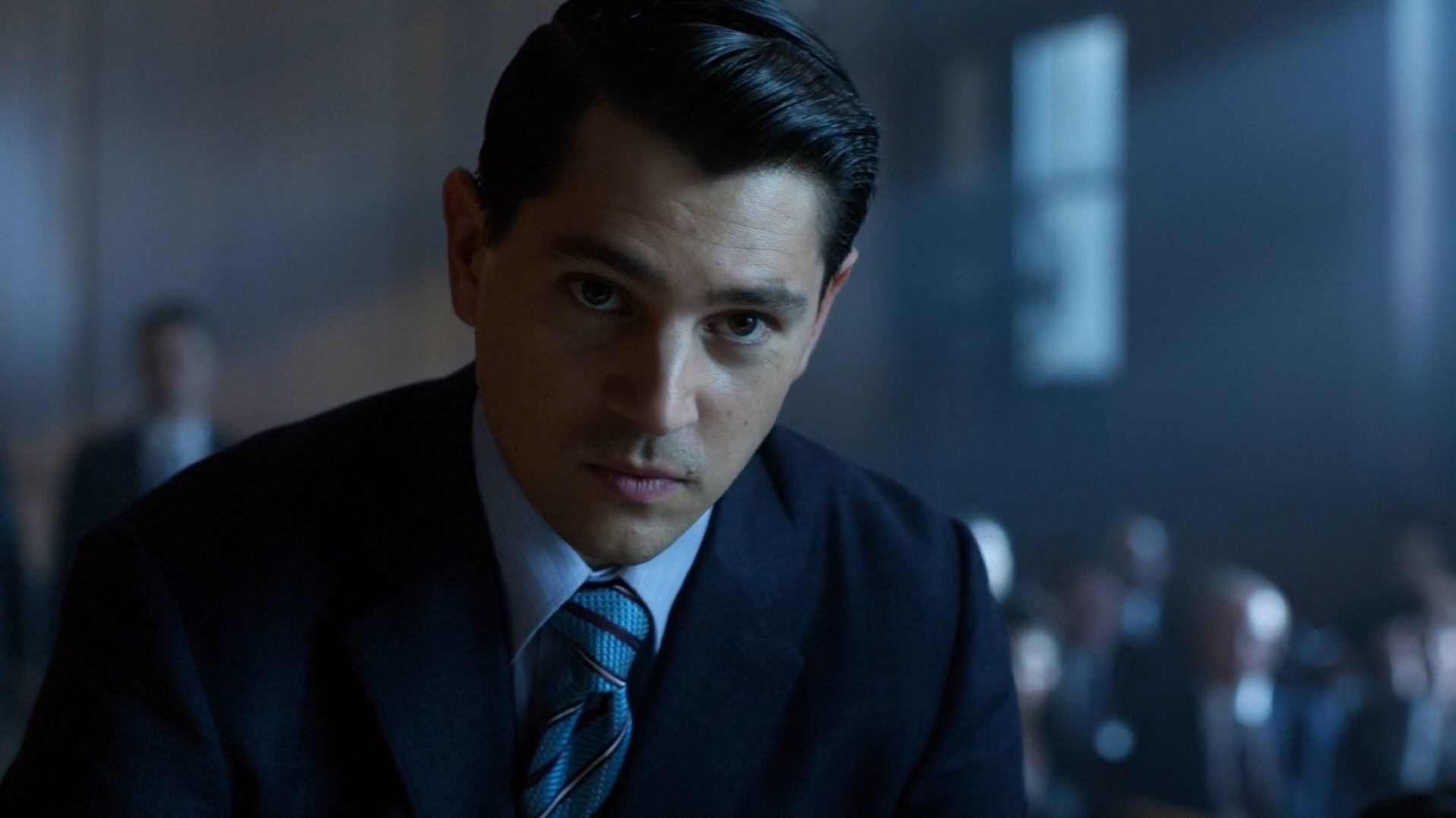 A good or bad example is Harvey Dent (Nicholas D'Agosto). He is a contemporary again not of Bruce Wayne but of Jim Gordon. I think his character was poorly, poorly used where we got good shades of what he could be or become but then doing nothing with them. This I think was when Gotham was unsure of what it wanted to be or where it wanted to go.

I think D'Agosto was pretty good in the role of the optimistic and idealistic assistant District Attorney. I just think Gotham never did anything with the character. Moreover, D'Agosto was born in 1980 and Mazouz in 2001. This makes the former old enough to be the latter's father, a very strange situation when you think that if Batman is say 30 the eventual Two-Face would be 51!

Moreover, he appeared in a total of six episodes spread out over two seasons and disappeared after Season Two. The whole thing was bungled.

The age gap among other characters made things more cumbersome. The gap between the future Penguin (Robin Lord Taylor) and the future Batman is minimum twenty-two years; Taylor is the same age as McKenzie, making both old enough to be Mazouz's father! That works for Gordon who is meant to be something of a father-figure along with Alfred Pennyworth (Sean Pertwee).


However, would it work for Pengy?

The future Riddler (Cory Michael Smith) has a mere fifteen year gap with Mazouz, still a bit of a stretch. Guest star Cameron Monaghan, who maybe played The Joker, at least was only eight years older, making their battles more sensible.

More on that later. It's not a slam on Taylor or Smith, whom I think created absolutely brilliant portrayals of their characters. I think Taylor's version of Penguin is perhaps the best of all the versions and Smith the second-best after Frank Gorshin's version on the Batman television show. Here is where I will praise Gotham: I thought it one of the best acted shows I saw.

Taylor's Penguin is thoroughly fascinating: a villain with a heart of brass but whom one has a modicum of respect. Perpetually written off, Penguin keeps coming back to thwart his enemies. In turns cold, murderous but eternally attached to his mother, Taylor's overall performance was one of of rage mixed with pathos.

As a side note, I am not sold on the idea that Pengy had to be gay. First, his attachment to his mother Gertrude Kapelput (Carole Kane) played into stereotypes of gay men as essentially 'mama's boys'. To be fair, Kane was also brilliant as this very loving but possessive immigrant mother. Second, it seemed like a way to create antagonism between Penguin and Riddler when the latter rebuffs his advances. Again, is that not a bit cliched: the gay man rejected by a straight character. Third, despite introducing this element Gotham never did anything more than just use it as a way to create enmity between Oswald Cobblepot and Edward Nygma. Penguin was never given a boyfriend or lover or husband. For all intents and purposes, Penguin was asexual throughout Gotham. Finally, I cannot help but think that Taylor's own homosexuality was at least a motivation to create a more 'inclusionary' character. 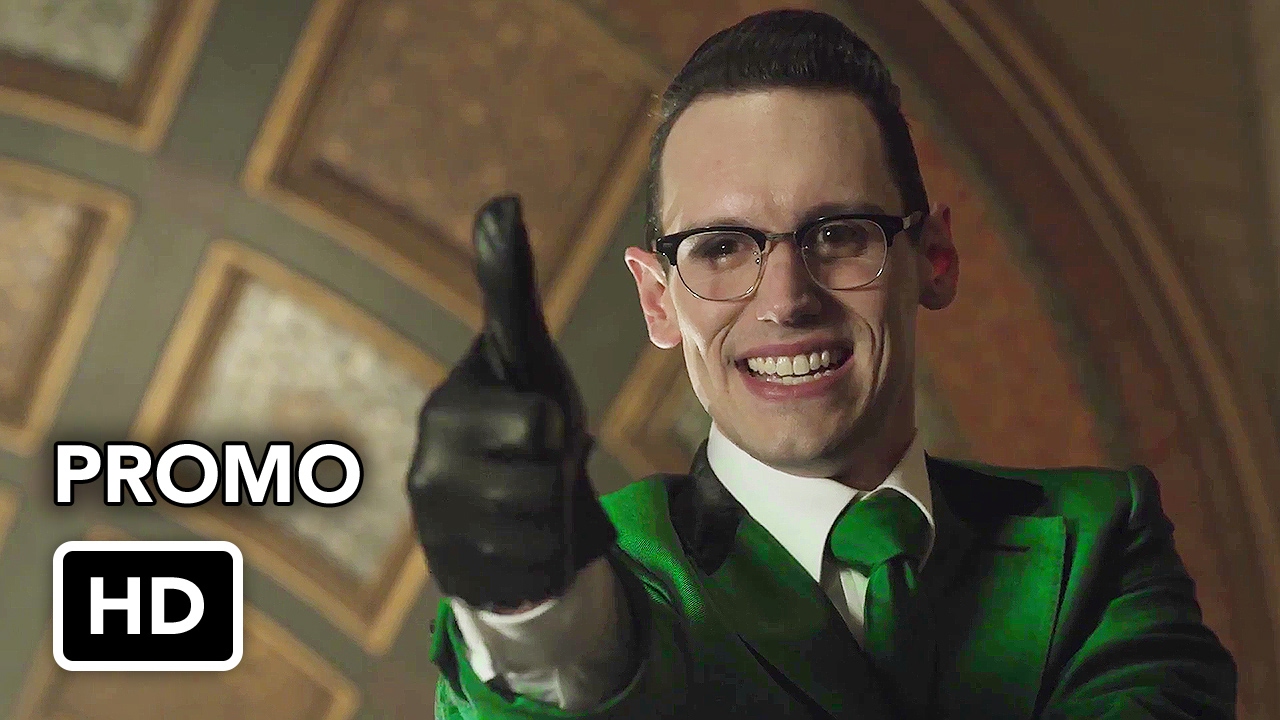 Smith's performance too was excellent: a good man driven by his divided soul to slip into evil. His struggles to where he gave up and surrendered to the darkness was so well played.

Credit should also go to Mazouz, who grew metaphorically and literally in the role. Starting out as quite weak to where he was almost uninteresting, Mazouz's Bruce was eventually released to becomes more active and proactive, darker, searching for the person he was destined to become. Again, this is where I think Gotham might have benefited more in introducing Bruce Wayne later, as at least in Season One he was relegated to the sidelines, as if the show really did not know what to do with him.

Going on in the performances it is important to remember the ladies. Bicondova's Selina, our beloved future Catwoman, was really in the top levels of actresses playing the role. It's a pity they never got Michelle Pfeiffer to portray Selina's mother as they share a resemblance. What I enjoyed about Selina was that she was less villain and more antiheroine, someone who was a criminal but not evil. She cared about Bruce, she cared about Ivy Pepper her eventual frenemy and she knew what lines she could not cross. It was a remarkably deep performance.

I figure I got sidetracked by the performances to focus on the show, what I think worked and what didn't. Putting a lot on trying to solve the Wayne murders in the beginning was I think a mistake in retrospect. It didn't give Gordon the buildup he needed. The age issue is also a problem, but how to solve it? Make the villains younger or Bruce Wayne older? Doing either would rob us of some excellent performances.

I think by the end Gotham had pretty much done a lot of course correction, keeping a balance between the Batman mythos and spinning its own stories. I though there was one thing that was off: The Joker.  Ever since the character of Jerome Valeska and later his twin Jeremiah were introduced in Season One and later sprinkled throughout the rest of the show's run, Gotham seemed to take perverse pleasure in doing a fan-dance about whether or not Jerome and later Jeremiah was this mythical iconic figure.

Again, not a slam on Monaghan, who was also excellent in the various roles save for being very much in the shadow of Heath Ledger's The Dark Knight version to where it was a mix of homage and rip-off. The show stubbornly refused to say 'Joker' or even use the name despite using all the Joker trappings. I am not one to be so enamored of the character to be outraged, but it does become rather irritating to keep getting winks and nods but never anything definitive. Whatever their reasons, one cannot help feeling just a touch cheated.

As I close out my look at Gotham, I think the first season was a jumble. Granted, I think well of that jumble and thought the episodes were good on the whole but the identity crisis set it off to a bad beginning. The show did improve and it did so by embracing Bruce Wayne versus pushing him to the side or completely off. Once we integrated the future Batman into the proceedings while still keeping such things as Bonkers Babs, Gotham sometimes hit it out of the park.

It's unfortunate that a lot of damage was done before things started getting better. On the whole though I liked Gotham and think well of it.
Posted by Rick at 5:18 PM