A Face in the Crowd: A Review 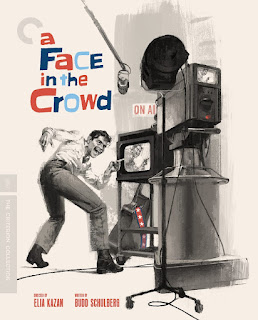 A FACE IN THE CROWD

There is an anger and prescient tone in A Face in the Crowd, a film that still frightens in its tale of the power of television. A Face in the Crowd is just as applicable today, perhaps more so in how this medium can shift hearts and minds for good or ill.

Arkansas radio reporter Marcia Jeffries (Patricia Neal) scours the countryside for interesting stories for her radio show, "A Face in the Crowd" and comes upon a Larry Rhodes, whom she quickly dubs 'Lonesome' Rhodes (Andy Griffith). His folksy manner, homespun wisdom and guitar-picking gains a cult audience. When the local Sheriff continues harassing Rhodes, Lonesome makes a crack about the Sheriff would be better suited to dog catcher than Mayor. He even suggests his listeners leave their dogs with him.

His listeners do, humiliating the Sheriff and delighting both Lonesome and Marcia. It isn't long before he moves past Arkansas onto Memphis, where now he goes from radio to television. He mocks his sponsor, and despite sales going up the sponsor drops his television show. Angry fans picket and burn their mattresses. 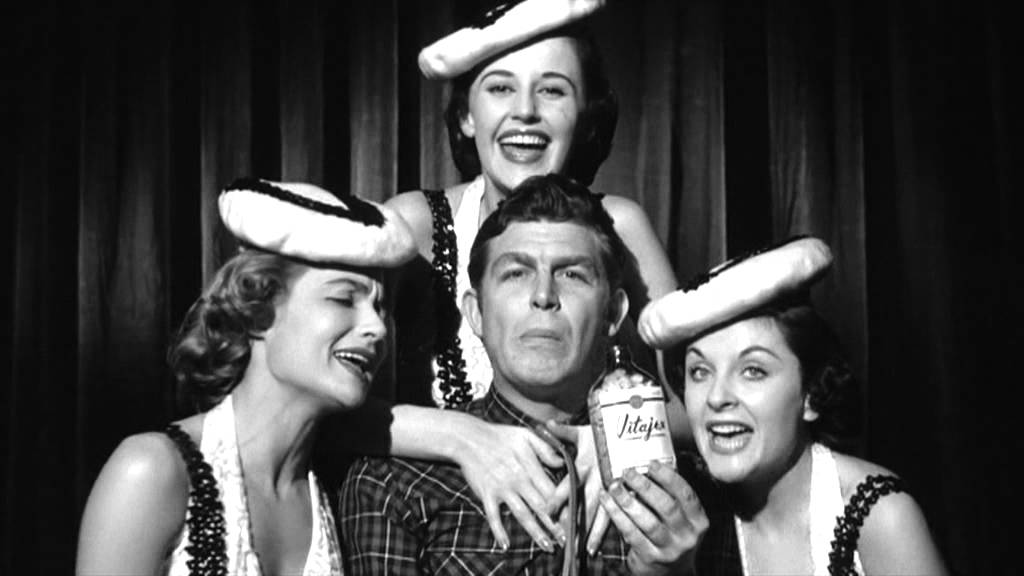 By now Marcia and Lonesome begin an affair despite Lonesome not being lonesome when it comes to ladies. Lonesome's main writer Mel Miller (Walter Matthau) is growing apprehensive of Lonesome's power as well as his vindictiveness, arrogance and lusts. Marcia is concerned but not enough to leave. Lonesome's agent Joey DePalma (Anthony Franciosa) is too busy cashing on to care about ethics.

Things come to a head when Lonesome proposes to Marcia, only for her to find another "Mrs. Rhodes", whose divorce may not be technically legal. A quick trip to Juarez should do the trick, but first a stop at an Arkansas baton-twirling contest for him to judge, where a pretty young baton-twirler named Betty Lou Fleckum (Lee Remick) catches his lustful eye. The besotted girl and Lonesome marry in Juarez, and Marcia is devastated.

Lonesome is approached by both his sponsor and Senator Worthington Fuller (Marshall Neilan) to win over audiences for Fuller's Presidential run. Lonesome, now seeing himself as a kingmaker or even power behind the throne, uses his now-national show, The Lonesome Rhodes Cracker Barrel, to rebrand Fuller in a more folksy manner, down to giving the stuffy Senator the nickname 'Curly'. He's even going to start a movement, Fighters for Fuller, to get his man over to the audience that Lonesome has contempt for.

In the end, a torn and conflicted Marcia puts out a hot mic on Lonesome as he closes out his show, where the audience hears just how much he hates them. He's dropped by everyone, and as he rages in his penthouse, Marcia leaves him with only his applause machine to keep him company. 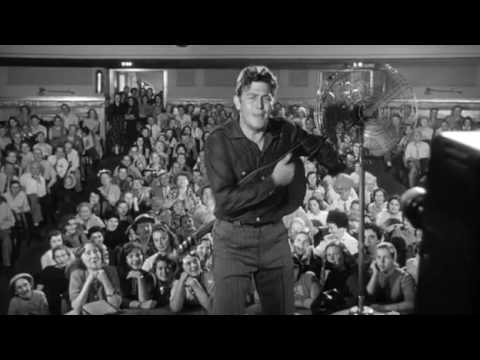 Director Elia Kazan and scriptwriter Budd Schulberg reteam after On the Waterfront on this dark tale of spiritual corruption and demagoguery. A Face in the Crowd makes its case, sometimes a bit heavy-handedly, about how one man can attract millions to his side to do his bidding.

One of the film's messages is that people mistake what they see on television for authenticity, that somehow being on that little screen gives one a sense of authority. Lonesome knows this and uses it for his own reasons.

To him, selling a quack medication like Vitajex through snappy jingles and sex appeal and selling political candidates like Fuller with the same methods is the same thing. It does not matter what is being sold, so long as the audience metaphorically and literally buy it.

The film is frightening in how well it captures the power of television to persuade along with the accompanying dangers. Long before Network, long before the rise of 'reality television', long before political campaigns and conventions became scripted, A Face in the Crowd showed that a popular figure could through sheer personality sway large numbers of people to do his/her bidding.

A Face in the Crowd was wise in giving Lonesome a couple of moments of humanity, even decency. Early on in his Memphis show, he brought an African-American woman to speak about how her home burned down, leaving her and her seven children homeless. He appeals to his viewers to send in donations to help, an appeal quickly heeded. The mere fact this white man asked audiences to help a black woman shows he, on a certain level, was not prejudiced. It's only at the end, when he loses all power but doesn't know why, that he falls completely, shouting at his black servants about being 'fancy-dressed monkeys'.

Andy Griffith had by now perfected his down-home corn-pone act both in his nightclub routines and in the television and stage version of No Time for Sergeants (the film version coming out a year after A Face in the Crowd). Here, he turns that persona all on its head. Griffith did not so much play against type than use that type to show another dimension. He was still a 'country boy', but Lonesome Rhodes was an angry, bitter man, burning with rage about his past and determined to get what he thought were his just rewards. 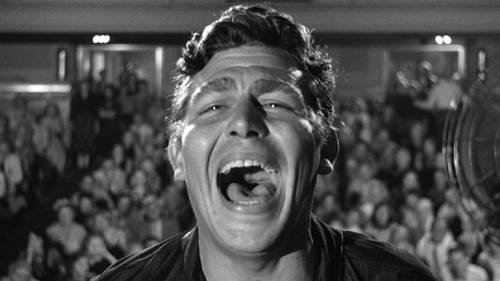 Griffith showed a darker, angrier side in A Face in the Crowd, far from his Andy Taylor or Ben Matlock. His a fearful, intense, almost terrifying performance of a man with all kinds of lusts: for power, for women, for control. There were a few times when he let himself be vulnerable, such as when he confesses fear to Marcia after getting the penthouse. However, by now, having seen Lonesome attack others through his television and radio shows, using his homespun manner vindictively, one wonders whether he was genuine or putting up a front.

It's an intense and fiery performance, fearful in his ego, madness and contempt. It might have gone wildly over-the-top, but given Lonesome Rhodes was already a bit wild, it fit.

Neal was perhaps a touch too dramatic as Marcia by the end, but in the beginning one could see how despite being a Sarah Lawrence graduate she too could have been taken in by Larry and 'Lonesome'. Matthau shows his dramatic side as the cynical writer, aware of this 'demagogue in denim'. He's sometimes saddled with lines that are too on-the-nose, which weaken the performance.

Remick, like Griffith making her film debut as this star-struck teen fan, was like Neal by the end a touch too dramatic and theatrical, but in the beginning the besotted nature of our pretty young thing showed a burgeoning talent.

Cameos by John Cameron Swayze, Walter Winchell and Mike Wallace lend authenticity in their cameos as themselves, though these and a This Is Your Life-type show, in the film as You Lived It, may date the film. The You Lived It scene also seems to have come from a longer version, as little of Lonesome's past is explored.