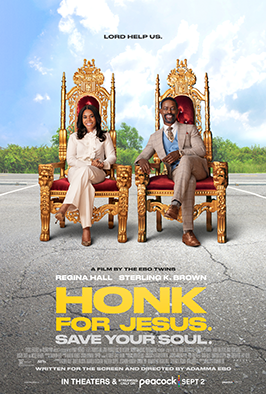 HONK FOR JESUS. SAVE YOUR SOUL.

The megachurch is already parody to many and despite what many secularists and atheists believe, these types of bodies are quite disliked among many rank-and-file Christians. Honk for Jesus. Save Your Soul imagines itself funny and insightful into the megachurch mentality. Sadly, it is as delusional in its ideas of itself as those it seeks to ridicule.

Pastor Lee-Curtis Childs (Sterling K. Brown) and his wife, "First Lady" Trinitie (Regina Hall) have brought in a documentary crew to chronicle their comeback. Once riding high with a massive congregation, their Wander to Greater Paths Baptist Church is brought low by allegations of sexual misconduct against Pastor Childs.

As Pastor Childs and "First Lady" Trinitie continue working to reopening WGPC they face various obstacles. Chief among them are the copastors of rival Heaven's House Church, where the majority of the Childs' congregation went to after the scandal. Heaven's House leaders Keon (Conphidance) and Shakura Sumpter (Nicole Beharie) are young and outwardly pleasant, but they too are pretty nasty people. Unwilling to move the opening day of their new church from Easter which conflicts with WGPC's reopening, the Childs now dive into more desperate methods to attract new congregants. Will the Childs' return to the top of the evangelical food chain, or will they fall on their faces? 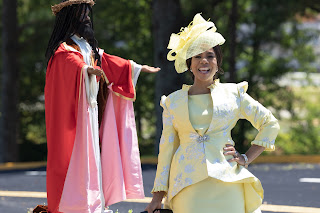 The thing about mockumentaries, especially good ones, is that the subjects are completely unaware of how they come across. We laugh but we also feel for them. There is a sweetness, an innocence in the characters' obliviousness and/or stupidity. No matter how awful their actions, how eccentric their behavior, how narcissistic their worldview, they at heart are not horrible people. Clueless, dim, perhaps delusional, but never mean.

Honk for Jesus has nothing but mean characters: vain, shallow, nasty, unpleasant, arrogant. Worse, they are overt about how awful they all are. Writer/director Adamma Ebo gives audiences no one to care for, no one to like, no one to root for. Instead, Ebo creates situations where even a former congregant that "First Lady" Trinite runs into turns into a bitch.

I could not help wondering during Honk for Jesus if Ebo could not have toned down some of the characters' actions or made them more sympathetic. For example, instead of making the Sumpters this younger version of the Childs, Ebo could have made them eager young preachers, unaware of how their new success irritated their rivals. Ebo could also have made Lee-Curtis and Trinitie clueless about how their lavish lifestyle and wardrobe made them look to others.

That, however, would require sympathy for the characters, which Ebo clearly did not have. There was a contempt bordering on hatred that blocked the viewer from caring not just about Lee-Curtis or Trinitie but even their five sole members. Trinite, ostensibly the most sympathetic of characters, apparently is undisturbed at the thought of buying a $2000 hat from Bathsheba's Bonnets (the name of the millinery being the only thing in Honk for Jesus that made me laugh). 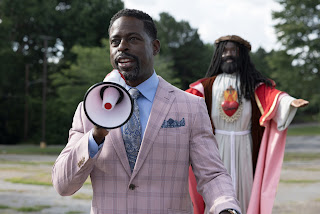 Ebo also directed the actors poorly. Each performance seemed a race to see who could play his/her character the most openly insincerely. Brown and Hall are good actors, but Honk for Jesus made them behave so broadly and overtly unpleasant that they came across as cartoons of cartoons. Brown at one point stripped to his underwear. We later see that it is to be baptized again, but his striptease seems to initially come out of nowhere that it makes Lee-Curtis look genuinely insane.

To be fair, it does allow Brown a chance to show off his incredible body, but I do not know if that was the purpose of this.

At times, Honk for Jesus forgets that it is a mockumentary and thinks it is a serious drama. I doubt, for example, that even for a documentary would we be allowed into the Childs' bedroom to see them attempt intercourse. Hall, at what is meant to be a serious dramatic moment when she breaks down, clearly was trying. However, it is hard to take Trinitie's meltdown seriously when she looks like a Kabuki actor in drag.

Yes, I did laugh here, but it was funny in the worst possible way.

As a side note, while I have wandered through the world of evangelical Christianity, it was not until Honk for Jesus I learned of something called "Praise Mimes". I really do not know if this is a real thing in the African American church or something dreamt up for the film. Add to that my intense dislike for calling the pastor's wife "First Lady". They are starting to use this term at the church that I attend, and the pastor and his wife are Hispanic.

I simply cannot call her or any other pastor's wife "the First Lady". I think it is a silly term to use and will not submit to it.