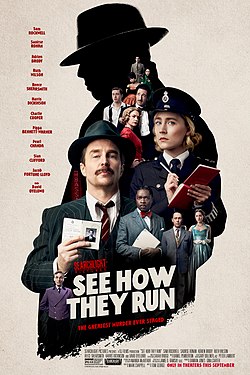 SEE HOW THEY RUN

As of this writing, apart from an enforced pause due to the COVID-19 pandemic/panic, the Agatha Christie play The Mousetrap continues to run triumphantly, defiantly, on London's West End. It's as much a tourist attraction as the Tower of London or St. Paul's Cathedral. As no film adaptation of The Mousetrap can be made until six months after it closes in the West End, See How They Run is as close as perhaps an adaptation we may get in our lifetimes. A film that is so thoroughly convinced it is funny despite massive proof to the contrary, See How They Run apart from some of the performances is almost a sad affair.

Celebrating The Mousetrap's 100th performance, loutish American film director Leo Kopernick (Adrien Brody) is murdered, with his corpse placed on stage. Kopernick fully expects to direct a film version of The Mousetrap, though he finds the adaptation by elitist playwright Mervyn Cocker-Norris (David Oyelowo) rather dull.

No killing in the first reel, no major explosions or shootouts at the end.

Mervyn, along with his Italian "nephew" Gio (Jacob Fortune-Lloyd) are now suspects in Kopernick's murder, but there are many suspects among The Mousetrap's cast and crew, along with film producer John Woolf (Reece Shearsmith). Even the play's stars Richard Attenborough (Harris Dickinson) and his wife Sheila Smith (Pearl Chanda) are not above suspicion.

Investigating the case are Inspector Stoppard (Sam Rockwell) and eager Constable Stalker (Saoirse Ronan). Stoppard is a bit of a lush but is surprisingly effective in the investigation, though if we are fair the more sensible yet inexperienced Stalker is more aware of things. As with any good Christie case, there is at least one more murder and a twist involving none other than Agatha Christie herself (Shirley Henderson). The murders revolve around the real-life case that inspired Christie's play, a case that puts the various cast and crew and even Christie's husband Max Mallowan (Lucian Msamati) in danger. Will Stoppard and Stalker be able to solve the case and bring things to a resolution? Will we too be asked to keep the identity of the murderer secret? 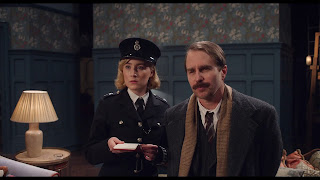 Murder and mirth are no strangers in the Agatha Christie universe if we go back to the Margaret Rutherford Miss Marple film series (which Dame Agatha hated). The nadir of the "Christie as Comedy" to my eyes was The Alphabet Murders, though the Peter Ustinov Poirot films kept more humor than perhaps they should have. Now with See How They Run, the filmmakers opted to go all-in on the comedy. I think a comedy could have been had with The Mousetrap being the site of a literal murder, but I think everyone was too obvious, too forced to be plausible let alone believable.

Everything in See How They Run played like it was fully aware it was a comedy. Separate from the performances, Daniel Pemberton's jolly, banjo-tinged score indicated that See How They Run was meant to be a lark. However, so much of the film became almost smug in how it thought itself hilarious.

Mark Chappell's screenplay was far too self-referential that it ended up becoming insufferable. Mervyn in his interview bemoaned how Kopernick wanted a fiery conclusion to The Mousetrap adaptation. When he comments how lazy flashbacks are to fill in information, you already know that we will immediately follow that with a literal flashback. What next, Mervyn indignantly asks, a title card that reads "Three Weeks Later"?

You can guess what we get. 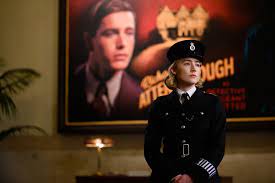 There is simply too much winking at the audience for us to fully get invested even in the stabs at humor. There were, for example, seemingly endless split screens that became too distracting, though to be fair these multi-scenes worked well when various characters leave a Mousetrap performance simultaneously for various reasons.

Director Tom George apparently told his cast to camp it up to the Nth degree, making things more inadvertently smug. So many of the cast seems to overplay things that they behave as if they are knowingly playing things as farce. Yes, See How They Run could have been farcical, but since so many were so deliberately over-the-top it made things slightly cringe-inducing.

The clear standout is Ronan as Stalker. She was wise in playing things straighter than everyone else, which made her punchlines land when others failed. She was still farcical, but unlike almost the rest of the cast, she was not just in on the joke but did not play it as if Stalker was aware that it was all a joke. Her delivery was straightforward and sincere, and that is what made her funny.

Take the scene when they are starting to question The Mousetrap theater and potential film version suspects. She calls Mervyn "overrated" with a straight face, then when Mervyn corrects her by saying he's "celebrated", she apologizes, saying she misread her notes. Stalker's sincerity and Ronan's delivery sell that, and that made me laugh. 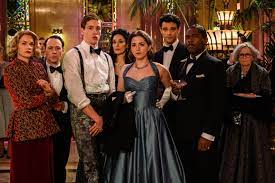 Sam Rockwell, I think the only American in the cast who played a Brit, seemed to mix playing a trope (the troubled alcoholic detective) with playing a comic drunk, sometimes unaware of things. Brody, who played an American, had some strange moments (such a dream sequence where Kopernick and Stoppard meet in a bar apparently located in Narnia), but voiceovers from dead men don't work for me.

Even while Oyelowo was deliberately overplaying things, he showed he can do comedy (hopefully better than this). He also made me think he'd be perfect for a Little Richard biopic given how Mervyn looked so much like the rock & roll legend. Dickinson's future Sir Dickie was also on the less obvious side of the mocking.

Too much of See How They Run is so overtly obvious that it grows irritating. I know the film is farce and gleefully ahistorical (how else to explain having a black man play Christie's second husband Sir Max Mallowan, though to be fair Msamati was terribly underused in his brief screentime). However, since the film was so deliberately jokey, it took me out of both the comedy and the mystery. Murder By Death was more restrained than See How They Run.

I do not know if the Christie estate agreed to participate in the film, but if they did, I wonder why. That would be a more involving mystery than the hijinks in See How They Run.