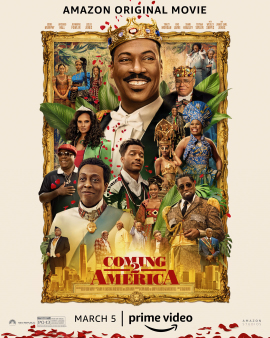 You can't go home again. Those words of wisdom should have been heeded by Eddie Murphy and everyone else involved in Coming 2 America, a dismal, disastrous sequel to his brilliant 1988 romantic comedy.

Prince Akeem of Zamunda (Eddie Murphy) is celebrating 30 years of marriage to his wife Lisa (Shari Headley) along with his three daughters. However, therein lies the problem: only a male can inherit the throne of Zamunda. With his father King Joffery (James Earl Jones) dying, Zamunda risks invasion and conquest by its next-door neighbor, Nexdoria.

Yes, the nation bordering Zamunda, which can be called its "next-door neighbor", is called "Nexdoria". Meditate on that for a moment. Now, let's move on.

Now let us meditate on the idea that a major plot point of Coming 2 America revolves around Akeem being raped. Akeem had sex with someone he did not know while drugged and without consenting to having sex with her. It is rape, pure and simple. Now, let's move on.

It is back to America to find his bastard son, Lavelle Junson (Jermaine Fowler). He and his boorish, trashy mother Mary (Leslie Jones) go to Zamunda so that Lavelle can be trained to succeed the throne as Crown Prince. While Lavelle struggles with completing his tasks to show his worth, he forms a bond with his hairstylist Mirembe (Nonzamo Mbatha). Lavelle, aided by his father figure Uncle Kareem "Reem" Junson (Tracy Morgan), now must rise to the task of kingship.

That is, unless Lavelle finds true love and King Akeem finds feminism. 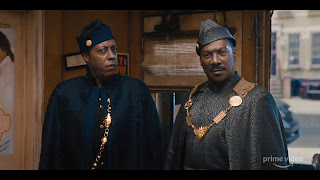 My mother (RIP) had an expression when she saw people behaving shamefully, "Que no les da verguenza?", which I translate as "Do they not feel shame?". Watching Coming 2 America, I felt genuine embarrassment for everyone involved, an embarrassment that everyone involved should have felt for him or herself.  I was not even twenty minutes into Coming 2 America and could see that it was a disaster. That there was another hour to go in this cringe-fest fiasco filled me with pure dread.

I do not think that I have seen a worse film than Coming 2 America. Perhaps The Hangover Part II or The Green Hornet, but those films made me genuinely angry. Coming 2 America just made me sad. It boggles the mind that the original writers of Coming to America (Barry W. Blaustein and David Sheffield) along with Kenya Barris, could have worked on a script and thought naming the bordering country "Nexdoria" was in any way clever or funny.

Every single thing about Coming 2 America should offend any person with an ounce, a milligram of intelligence or decency. The movie trades in wildly offensive stereotypes that if not for Murphy's involvement would be accused of being flat-out racist. The most overtly racist character is Calvin Duke (Colin Jost), the grandson of the original Duke Brothers.

As a side note, it should be noted that the Duke Brothers were from Trading Places not from Coming to America. Their whose cameo in Coming to America was a nice in-joke from Murphy's filmography. They were not essential to Coming to America, but somehow, we needed a Duke to interact with Lavelle. Having Jost (who may be the literal poster boy for "white male privilege" as I find no genuine talent to justify his success) say such things as telling Lavelle that Neil deGrasse Tyson is "your guy" is bad enough. However, Jost did not act in this film. He spouted words.

Leslie Jones and Tracy Morgan traded in stereotypes as the trashy woman and uncouth man respectively. Jones' character was more than just a boorish idiot. She was also loud, abrasive, arrogant, sexually voracious and unapologetic about having raped Akeem.

Again, that plot point is something I cannot get over. Semmi drugged Akeem and brought this vulgar woman to take advantage of someone incapacitated, who was not able to consent to sexual intercourse and who clearly was so drugged he thought the whole incident was a dream about a large boar riding him. If the genders were reversed and Semmi had drugged Mary with Akeem getting on top of her to have sex without her consent, people would have been outraged.

There would have been protests. Demands to fire the writers and director Craig Brewer. Loud condemnations from women's rights groups. Feature stories on news networks. I would argue rightly so. However, because it is a woman taking advantage of a man, somehow it is meant to be funny.

Akeem did not consent to have intercourse with Mary. He was incapacitated by drugging. He was raped, and that Coming 2 America thought that this was necessary, let alone funny, is disgusting.

Not that Jones' performance made anything of this better. Her whole career, at least from what I know of it, consists of playing a stereotype of a vulgar, uneducated woman. Clueless and insulting, I cannot believe Jones was proud of her work here, though her MTV Movie Award for "Best Comedic Performance" says more about MTV viewers (and perhaps the whole of Western civilization) than about how good she was.

The effort to make Morgan and Hall enemies transcended cringe. A scene where they are debating on ZNN with Daily Show host Trevor Noah as a Zamundian news host was lazy and stupid. Seeing Uncle Reem move from the split screen to strangle Semmi showed that they were in the same room, making the entire sequence illogical. 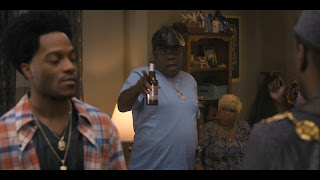 He has done much good in trying to elevate black characters in film. Coming to America was a celebration of black life, with successful, well-educated and well-rounded characters. Both the African and African American characters were elegant, wealthy and humorous without being boorish or vulgar.

Coming 2 America, conversely, felt like a massive step backwards. What I was thinking was, "Why couldn't Lavelle be highly educated but frustrated by his lack of upward mobility" or his mother be successful or at least reformed from her early party-girl days to becoming a strong woman working to support her son. Instead, we got Lavelle be a ticket scalper for his uncle (albeit a reluctant one), his mother still trashy, stupid and vulgar and his uncle crude and equally vulgar. Seeing Wesley Snipes do bizarre dances and be a parody of a parody of an African dictator was just sad.

Only Mbatha and Fowler to a lesser extent gave anything close to decent performances. Mbatha had at least a decent character to play (though seeing her recite the plot of Coming to America was depressing even if she had no control over things). Fowler showed promise as Lavelle early on, though the bad sitcom-like script kept him down.

Above all else Coming 2 America is not funny. I laughed once, when barbershop owner Clarence called Akeem "Idiot Amin". Apart from that, Coming 2 America was an exercise in horror, a cringe-worthy nightmare that should never have been made as it was. Bringing back bits that reminded one of the original just made things worse.

Coming 2 America will be in the pantheon of "Worst Sequels Ever" if not "Worst Movies Ever".