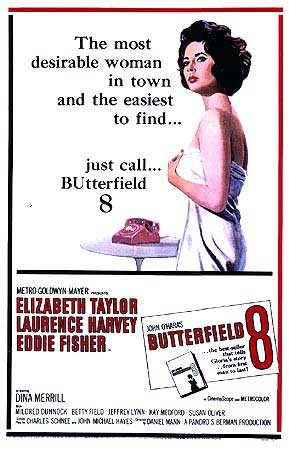 For audiences at the time, it might have been difficult to separate Elizabeth Taylor the person and Gloria Wandrous, the good-time girl from Butterfield 8. Released after the scandal over Elizabeth Taylor's affair with Eddie Fisher and the resulting breakup of Fisher's marriage to America's sweetheart Debbie Reynolds, Butterfield 8 runs the risk of "art imitating life". That it's remembered at all is due to Taylor winning her first Best Actress Oscar, one that she insisted she got because she almost died when making her next film, Cleopatra.

Now with the gift of hindsight, we can see Butterfield 8 separate from the sordid backstage drama. Melodramatic, a bit camp, Butterfield 8 is nothing for Taylor to be particularly ashamed of, though perhaps not her high point.

First, a brief explanation. "Butterfield 8" refers to the telephone exchange service that Gloria used to receive any messages.

Gloria Wandrous is ostensibly a model, paid to be photographed wearing fine clothes in the most chic of restaurants and bars. In reality, she is a woman of very easy virtue, going from man to man with literally naked abandon. She, however, prides herself on never taking money or anything else for her charms.

One man who is besotted with her is wealthy Weston Liggett (Laurence Harvey). He is simply mad for Gloria, but he still keeps to his marriage to Emily (Dina Merrill) even if he makes clear how much he hates his life with her. Gloria's best friend Steve (Eddie Fisher) can only comment on Gloria's wanton ways. His friendship with her drives a wedge between Steve and Norma (Susan Oliver), his girlfriend.

Eventually however, Gloria finds herself in love with Wes, embarking on a true romance. She now confesses to her mother Annie (Mildred Dunnock), "Let's face it! I WAS THE SLUT OF ALL TIME!" but now she is reformed. However, the issue with a fur coat that Gloria had taken in a pique threatens to create chaos and heartbreak for all concerned, leading to tragedy and death. 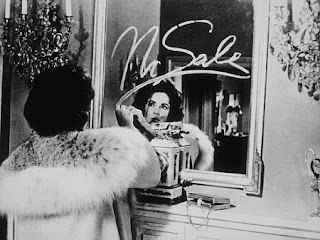 Taylor, for the rest of her life, was adamant that Butterfield 8 was total trash. She was forced into it by the studio, MGM, to whom she owed one more film before she could take the million dollar salary for Cleopatra, a record at the time.

Butterfield 8 did not enhance her personal reputation either. Here she was, playing a virtual nymphomaniac at a time when she had become "the other woman" and "the black widow", luring her late husband's best friend away from his sweet and wholesome wife. I imagine people thought they were watching something closer to a biopic than a film adaptation of John O'Hara's novel.

Finally, there is the Best Actress issue. Butterfield 8 was Taylor's fourth consecutive Best Actress nomination, but her win was seen even by Taylor as a sympathy vote. While filming Cleopatra in London, she had developed a violent case of pneumonia that almost killed her. Only an emergency tracheotomy saved her life. The public, having scorned her as a shameless homewrecker, now forgave and sympathized with her.

In terms of acting, Taylor had some good moments. Very late in the film she has a monologue with Steve where she recounts being molested by one of her mother's suitors when she was 13, only to admit that she loved every minute of it. However, there seemed to be less Gloria Wandrous and more Elizabeth Taylor here. The brazenness and anger to near contempt Taylor plays seems more a reflection of her actual mood than the character's.

There is almost something hilarious in her infamous "SLUT OF ALL TIME!" line. The film as a whole veers if not crosses into camp, but Taylor is right there, throwing herself into the hysterics with a mix of abandon and anger. 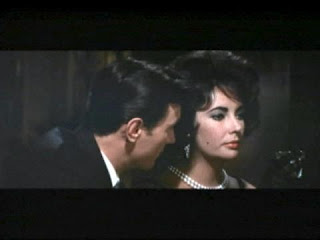 Most of the acting is a bit broad. Taylor insisted on a role for her then-husband, and Eddie Fisher proved himself a particularly bad actor. His efforts to be the voice of reason came off as flat and monotonous. Most everyone else seemed too forced, particularly Oliver and Betty Field as Frances, Annie's best friend. Whenever they threw veiled insults at Gloria, they pushed the remarks to make it too obvious. Taylor did the same, making things less throwing shade and more throwing the kitchen sink.

In her few scenes, Dunnock did well as the willfully blind mother.

Laurence Harvey kept to his angry patrician manner, though his drunken anger at Gloria did come close to making Butterfield 8 close to parody. Harvey seemed to specialize in bitter, entitled men, forever angry with the world. Here, he keeps to that manner, as if Wes Liggett were the American version of Room at the Top's Joe Lampton. However, he on the whole was better as Wes, this unrepentant heel who simultaneously desired and tormented Gloria.

The film does have some good elements. Bronislau Kaper's score is quite good, jazzy and tragic. Director Daniel Mann also has some excellent moments, such as when the blinking lights of the motel marquee signal the Wes/Gloria tryst, which then transition to them at a diner.