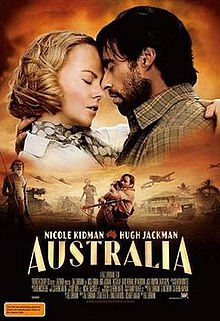 
I keep on falling in and out of love with Baz Luhrmann. Sometimes I love him (Moulin Rouge!), sometimes he makes me mad (Romeo+Juliet). With Australia, an homage to his homeland, I'd say even the felons sent to populate the continent would be embarrassed by it. In his efforts to make a sweeping epic, he's only succeeded in sweeping away two talented actors into a storm of stupidity and a colossal embarrassment for everyone involved, including the audience.

There isn't one story in Australia but about three or four all slammed together, and that is its chief problem.
English aristocrat Lady Ashley (Nicole Kidman) is determined to force her husband sell Faraway Downs, the cattle station their Australian cattle station. She flies from Britain to Darwin in Australia's rough & tumble Northern Territory. She suspects her husband of enjoying the pleasures of 'waltzing Matildas', and is irritated when she is met not by Lord Ashley, but by The Drover (Hugh Jackman). Lady Ashley and The Drover (we never do learn his real name, though she keeps referring to him as "Mr. Drover", oblivious to the fact that's his job not surname) go to Faraway Downs, where they discover that Lord Ashley has met a violent end, and Nullah (Brandon Walters), a child and self-described "creamy" (a person of half-Anglo, half-Aborigine background).
Faraway Downs is the only station not owned by "King" Carney (Bryan Brown), and thus the only competition to his efforts to land the lucrative Army contracts for their cattle needs. After a violent encounter with her overseer, she persuades The Drover to drive the cattle from Faraway Downs back to Darwin.


All that is in the first hour, with another two hours to go.


Rather that waste time going through all the plots screenwriters Luhrmann, Stuart Beattie, Ronald Harwood and Richard Flanagan threw into Australia, it might be easier and faster to give a rundown of all the movies that it stole from. It goes from Out of Africa (all Kidman had to do was say, "I had a station in Australia"), then turns into Red River (perhaps it could have been called The Woman from Snowy River) and dives in straight into Pearl Harbor (pun intended). Throw into the mix a nice touch of Aborigine mysticism a la Dances With Wolves and you've got a monster of a tale that's as vast as the Outback and just as empty.
As a side note, we have essentially four plots, and four credited screenwriters. Coincidence?


Where to begin on where it all went wrong. Let's start with the performances.

Nicole Kidman adds another horrible performance to her resume with her Lady Ashley. She is clueless, stupid, completely unaware of anything that is going on, and has this curious, breathy delivery to her speech. She was so dumb that I actually wrote in my notes, "Is this suppose to be a COMEDY?" No one can be that clueless with children, especially after said child just lost his mother. Worse is her incessant inability to comprehend that "Drover" is not his name, but somehow the script kept insisting she call him "Mr. Drover".
It was pleasant to hear Jackman speak in his native accent, but I saw nothing in his performance other than an obligatory shirtless shot, and a near-permanent growl a la Wolverine. Bryan Brown added nothing to "King" Carney, except a chance to wonder why another good actor would want to embarrass his homeland in this fashion. Actually, that could be said of everyone involved. One wonders if cast & crew are ashamed to be from Oz.


As large and grand and long as Australia is, it really has nothing to say. As stated earlier, it tells so many stories it can't bind them together into one coherent narrative. Lady Ashley's story, The Drover's story, Nullah's story, Nullah's grandfather King George's story, "King" Carney's story, even the continent of Australia's story: none of them gel into the one epic story Luhrmann is aiming for. Instead, we get just little bits of each crammed together. 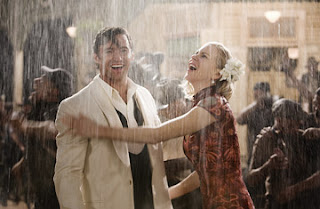 There's an incoherence to Australia as you try to sort out whose story it is. If one examines Australia, you'll find the story is suppose to center around Nullah--he's the narrator and the film bookends with statements about the Stolen Generation (half-Aborigine children forced away from their families). However well intentioned all this was, by wrapping up serious issues within a vapid love story it makes a mockery of the seriousness of the issues being brought up.

To its credit the film goes out of its way to respect Aboriginal traditions: the opening, for example, warns Aborigines that they will see images of dead people, which I gather is something they cannot see. However, Australia takes the "mystic" nature of the People of the Dreaming and carries it to an outrageous extent. The silliest is when there is a cattle stampede. Nullah races ahead of the cattle, stands right up to the edge of the cliff, then pulls his arms out towards the animals and they all stop. It's so laughable that it becomes insulting to both audience and Aborigine. If he's only half-Aborigine, imagine what he could do if he were full-blooded? Maybe he could have stopped the Japanese from bombing Darwin, but that's another story. Australia goes for a mystical take on its native people, and somehow again despite good intentions only manages to "other" them.

Ultimately, Australia fails in everything it tries: love story, adventure, history, respect for the native Australians. You'll get a better and more authentic taste of Australia when you go to the Outback Steakhouse.