The Sixth Doctor: An Introduction 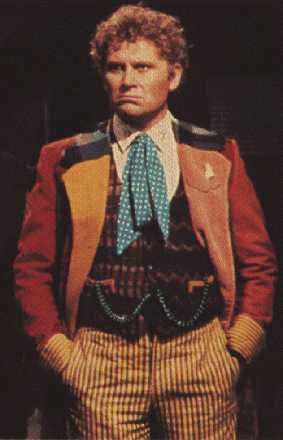 
**Author's Note: I had planned to review the Doctor Who catalog on this site, but given the sheer number of stories I opted to spin-off those reviews to a separate site: Gallifrey Exile. As such, readers will find reviews may hop from one site to another. Reviews are collected at a link at the end of this essay. Also, this essay was updated on January 2021.
Actor Brian Blessed, who guest starred on Doctor Who in a part specially written for him, commented in The Doctors: 30 Years of Time Travel & Beyond, about Colin Baker's interpretation of The Doctor. "With Colin", he said, "I got the sense that he hadn't made up his mind how he was going to play it". Baker would, Blessed observed, pursue one avenue of interpreting the role halfway and then pull back. This seems as apt a description of Baker's tenure as any I've heard.
Colin Baker was not the worst Doctor on Doctor Who. If you see his guest starring performance in the Fifth Doctor story Arc of Infinity, you see he could be quite menacing. Perhaps this is what persuaded Doctor Who producer John Nathan-Turner to cast him, though I've also heard JNT found Baker personally witty and funny. If he had a strong producer to guide him, he could have been quite a dangerous Doctor, bringing a touch of menace to the role.
God Bless John Nathan-Turner, but he was not that kind of producer.

Let me state that JNT deserves credit for keeping the show alive as long as he did. However, he did infinite damage to the show by making some awful decisions. However, we can't avoid that fact that Baker should have been more forceful to JNT. He should have also taken greater charge of his interpretation of the character. 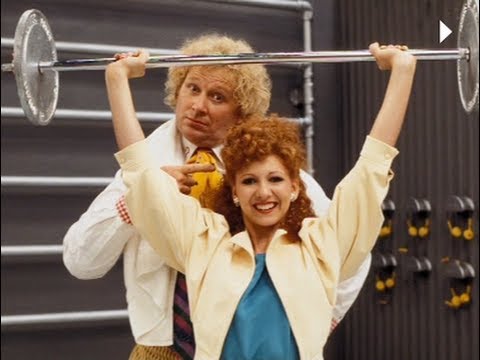 It wasn't Baker's fault alone. He was the unfortunate recipient of the WORST costume in the series' history (and that's saying a lot). The eccentric wardrobes of Tom Baker and Davison now degenerated into a laughable patchwork that made Colin Baker look like Ronald McDonald's illegitimate son. It might have been done with the best of intentions, but to a first-time viewer, it only has the effect of making him look ridiculous, a figure of ridicule than of interest.
That awful decision doomed Baker before he even began. JNT might have thought he was being clever, enhancing the Sixth Doctor's arrogance, egocentrism and pompousness. Instead, he undercut the character by turning him into a joke. Here is a good example of how actor and producer were at loggerheads, with producer being so wildly wrong.
To emphasize the Sixth Doctor's menace, Baker suggested an all-black suit. Nathan-Turner rejected the idea, deciding to go for the most garish outfit possible. The frustrated costume designer, fed up with Nathan-Turner's constant rejections for her designs, created the multi-patch coat as a joke. To her horror, JNT loved it. Poor Baker, realizing what a hideous outfit he'd have to wear, managed to sneak in a cat pin as his sole contribution.
There is simply no way to underplay how awful the Sixth Doctor's costume is. It should serve as a textbook example of how one poor decision can create a mess that no amount of good writing or acting can save.

You can't take the character seriously if he's wearing the silliest of costumes. Tragically, only Nathan-Turner didn't see until far too late what damage he'd caused by his obstinacy.
It brings to mind what Milton Berle once said. Suppose someone comes out in a funny costume, Uncle Miltie stated. You get a laugh for a few moments, but then what? You've got to carry on with the scene, and now you have to work the funny costume into the act. When you are suppose to have a serious character, you can't accept the insanity of the outfit and take things seriously. 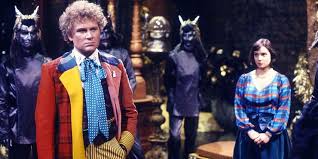 Another unfortunate circumstance that Baker faced was falling ratings. The BBC held the bizarre idea that the reason viewership was dropping was Colin Baker himself. It wasn't the poor stories he had. It wasn't the almost insane idea to start Baker's tenure with the Doctor attempting to murder his Companion (albeit in a state of post-regeneration confusion). It wasn't the slashed budget that caused the already wonky sets and effects to look ghastly.
No, according to the wise folks at the BBC, it was solely the lead actor's fault. Colin Baker got the rawest of raw deals: lousy costume, bad scripts, oddball producer, small budget and while trying desperately to make things work getting the blame on top of all that.
When the BBC actually spent money on the show, the results are still extraordinary. Take for example the opening of the season-long The Trial of A Time Lord (aka Episode One of The Mysterious Planet). Even by today's standards, it's spectacular. In fact, I thought the first minute, with its camera movement over a spaceship and the TARDIS being taken into it, had been remade for the DVD release using 21st-Century computer generated effects.

I was stunned to discover that nothing had been altered in that sequence. It is proof positive that if the budget had been increased it would have rescued The Doctor far more than Doctor in Distress, an embarrassing We Are the World-type song that is still perhaps the lowest point in connection with the series. Doctor in Distress remains one of the oddest moments in attempts to save a show. The sight of an openly contemptuous Anthony Ainley (The Master) and a slightly bemused, slightly perplexed Nicholas Courtney (Brigadier Lethbridge-Stewart) "singing" is frankly quite sad.

In retrospect, it's unfair that Baker got the blame and the boot for the low ratings and dreadful stories, which were completely out of his control.  He did the best he could under difficult circumstances, and got nothing but grief over it.

Finally, Baker was saddled with perhaps the two worst Companions in the series' history. Peri (full name Perpegilliam) Brown is a good idea on paper: the first American Companion. To her credit Nicola Bryant's American accent is good. However, Nathan-Turner's obsession with exotic names sinks her character, and she really isn't given a chance to do much except run around in skimpy outfits. True, she was there for "eye candy", but it is amusing that the openly gay Nathan-Turner had a fixation on showcasing Peri's physical attributes.
Peri Brown, whatever her faults, could at least be endured.

Not so Melanie (Mel) Bush. Even as a child I hated her. To this day I still loath her. Brainless vapid twit. She exemplified the worst caricature of a Companion. My only memories of her are of her SCREAMING. A LOT. SCREAMING ONLY AND ALWAYS.

I hated her. I hated her looks, I hated her voice, I just hated her. What do I mean, 'hated'? I STILL HATE HER. I imagine Bonnie Langford is a very nice person and a talented actress. The stories her character were in, however, gave no indication of either. Perhaps I'm being too harsh, but I still wince whenever I think of Mel Bush. Can't help it. Never liked her. Still don't.

All this created a perfect storm from which no actor could have survived. To his eternal credit, Baker still is active in Doctor Who-related events and activities, and appears proud to be part of the series (if not about how things ended, for which he has every right to be angry). 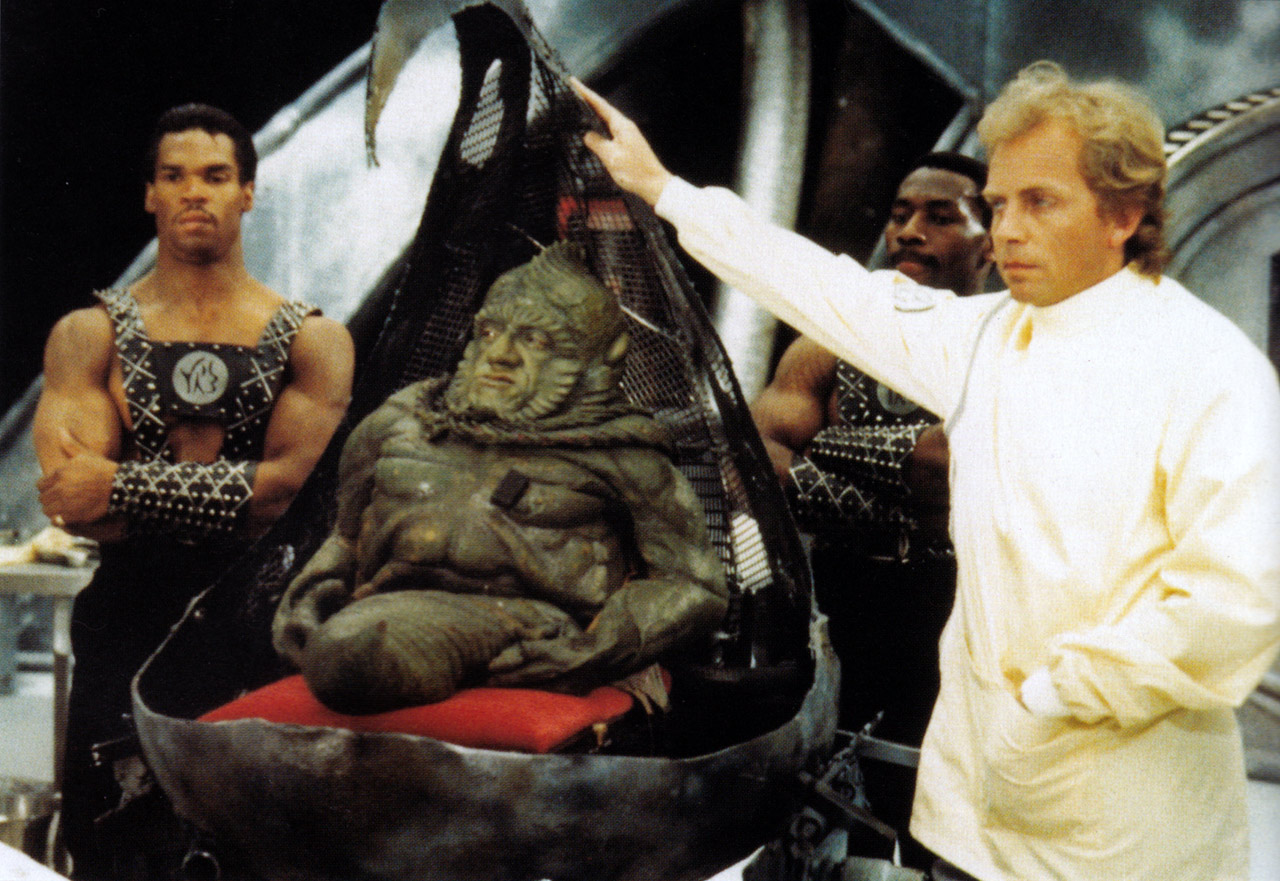 Even among the ruins of Baker's tenure, one can still find some treasure. The slimy sea villain Sil, first seen in Vengeance on Varos and returning in Episodes Nine-Twelve of The Trial of a Time Lord (aka Mindwarp) is a great villain. I would rank him not just among the best Doctor Who villains but also the last great villain the series created.
We also had the first appearance of a renegade female Time Lord known as The Rani, more an equal to The Doctor than the now-somewhat cartoonish Master became. She proved herself a worthy opponent whose potential was and is still wildly under-tapped.

Curiously, though he was the only Doctor to be fired, he will be the first to have all his stories released on DVD. Out of the ones available now, I still think Vengance on Varos is the best. In its story about televised torture for the amusement of people, it's remarkably prophetic. As for the worse, I have to say The Ultimate Foe. This isn't a criticism of writers Pip & Jane Baker (though most Doctor Who fans seem to have a particular antipathy for them). It has more to do with Mel being there. She was in Terror of the Vervoids, but that story holds up pretty well in spite of her. I also didn't quite understand The Mark of the Rani, but I give it props for the creation of another Time Lord baddie.

Argument for Four Stories thesis: they involve four distinct settings with four sets of writers. Therefore, they are Four Stories.
I'm with the Four Stories group. If you remove the setting of Gallifrey and the trial itself, I think the stories could be independent of each other. I liken it to The Key to Time. Nobody ever argues they are one story, even though all involve the same objective: finding the six segments of The Key to Time. Like Key to Time, Trial of A Time Lord was a season long. With that, and the fact that there was no one writer for one story, I count them as four. There it is.

Stories available: Attack of the Cybermen, Vengance on Varos, The Mark of The Rani, The Two Doctors, Timelash, Revelation of the Daleks, and The Trial of a Time Lord box set (containing The Mysterious Planet, Mindwarp, Terror of the Vervoids, and The Ultimate Foe).
Next: The Seventh Doctor: An Introduction

Email ThisBlogThis!Share to TwitterShare to FacebookShare to Pinterest
Labels: 6th Doctor, Doctor Who