The Fourth Doctor: An Introduction


**Author's Note: I had planned to review the Doctor Who catalog on this site, but given the sheer number of stories I opted to spin-off those reviews to a separate site: Gallifrey Exile. As such, readers will find reviews may hop from one site to another. Reviews are collected at a link at the end of this essay. Also, this essay was updated on January 2021.
Tom Baker holds the record for the actor who played the Doctor the longest: seven years in all. Due to that he has become to many the face of Doctor Who. It's his version: the wild, unkempt hair, the long coat and floppy hat, and a scarf that is illogically long, that pops into people's mind when they're asked about Doctor Who. It's this version that was parodied on Late Night with Conan O'Brien, and which was the basis for at least three episodes of The Simpsons.
Baker certainly had the authority of Hartnell, the general goofiness of Troughton, and the action orientation of Pertwee. However, he brought a very special element to The Doctor: his own wild eccentricity. The Doctor wasn't a gruff old man, or a cosmic hobo, or a dashing man of action. The Doctor now was just a bit nutty.
Of course, this is part of his charm, as they say. Baker was successful in meshing all the work his predecessors had done and turn it into gold. His Doctor was highly intelligent, though a bit aloof from everyone, even at times those within his immediate circle. He was nobody's fool, but he rarely let them know it.
Perhaps this is why he is often ranked the Best or the Favorite Doctor. He seems a perfect amalgamation of the character's previous incarnations, while bringing something unique to the role. In retrospect, he revived the show to greater heights.

He also had a great run of Companions. Starting with Sarah Jane Smith, he moved to such varied personalities as warrior princess Leela and the female Time Lord Romana.
I'm not talking about there being romance between the Doctor and his Companions per se. Rather, he was more open with them than the Doctor had been with anyone outside his granddaughter from his first incarnation. Baker also made him far more mercurial than The Doctor had been. He wasn't by any means a misanthrope, but he at times didn't invite beings he encountered into cozy relationships with him.
Tom Baker also knew, like all the others, how important the character was to children. As a result, he somehow communicated to kids that they could travel with him, join him in his wanderlust. I do wonder, though, if he stayed on too long. Is this blasphemy? I don't know. Tom Baker is among the best Doctors, yet I wonder by having one actor in that role for such a long time, does that hinder those that follow? Hard to say.  There were issues with the latter part of his tenure, particularly in that the humor might have been a little overboard.  Was it becoming too jokey, too silly?

Out of his stories available as of the original writing, my favorite is Planet of Evil. The visuals show that with enough imagination even the most limited budgets can still produce incredible images. I also thought The Talons of Weng-Chiang and City of Death to be quite inventive and original. The former will always be controversial due to both the yellowface and the portrayal of the Asian characters,  but that subject is for another day. 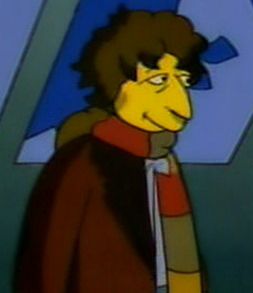 Next, The Fifth Doctor: An Introduction
Visit Here for Fourth Doctor Reviews.
Posted by Rick at 6:31 PM

Email ThisBlogThis!Share to TwitterShare to FacebookShare to Pinterest
Labels: 4th Doctor, Doctor Who