An Ellipse of the Heart...

The Swerve: How The World Became Modern is mostly about how Lucretius' poem On the Nature of Things was saved from being lost to history and how its rescue changed the course of Western thought. However, it does touch on the story featured in Agora.  Stephen Greenblatt briefly covers the tale of Hypatia, a brilliant female philosopher and scientist in ancient Alexandria brought down by a Christian mob convinced her study of the sciences and her championing of reason were signs of witchcraft.

While the story of Hypatia and the end of the Great Library at Alexandria would serve as a great source for an exciting film, Agora fails to capitalize on it due to a lack of connection with all the characters.

Hypatia (Rachel Weisz) is a brilliant and beautiful philosopher and scientist, constantly vexed by the Ptolemaic system of planetary motion.  As she works to make sense of how the 'wanderers' (the planets) appear to be different sizes at different times, her students have eyes only for her.

There are two chief students who are enamored of her: Orestes (Oscar Isaac), a pagan, and Synesius (Rupert Evans), a Christian.  Also in love with her is her slave Davus (Max Minghella). She, however, is devoted only to her studies and her father, Theon (Michael Lonsdale).  Unbeknownst to anyone, Davus has come under the spell of Ammonius (Ashraf Barhom), a Christian fanatic who brings him to the Faith.

The struggle between the upstart Christians and the pagans comes to a head when the former commit an act of blasphemy against the latter: they threw rotten vegetables at the pagan idols.  A battle ensues: first the pagans attacking the Christians, then the Christians laying siege to the Library and Temple complex attached to it.  Even though Synesius is within the Library and did not participate in the assaults, at first he and his fellow Christian students are ordered to be held as hostages, but Hypatia will not allow this.

Eventually, the siege is lifted but as a result, the Christians rampage the library, destroying the statues and books contained within.  Davus, who joins the Christians, almost assaults Hypatia but cannot go through with it.

She frees him, and then we get the second act.  Orestes is now both a Christian and Prefect of Alexandria, Synesius is Bishop of Cyrene.  Unfortunately, the Bishop of Alexandria, Cyril (Sammy Samir) now wants to turn Alexandria into the ancient version of Taliban-run Afghanistan.

Not satisfied with stamping out paganism, he now sets his sights on the Jewish citizens, ordering pogroms.  Orestes fears that taking on Cyril directly will lead to a weakening of his position and hopes that his old friend Synesius can help.  The negotiations fail due to Cyril's insistence that 'women' should not have power over men.  Davus, now part of the Taliban-like Parabalani, forsakes his desire for wisdom, but not for Hypatia.  When Cyril decides that Hypatia must go, he attempts to warn her but is too late.  Deciding that his brothers will kill her, Davus suffocates her rather than let her be skinned alive. 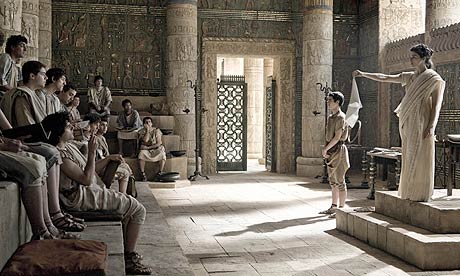 Somehow, it's hard to believe that with such a tale of wisdom and madness, of love, of fanaticism, Agora could have come out to be so stilted and hollow.

I think it has to do with how director/co-writer Alejandro Amenabar (with Mateo Gil) decided to treat both the subject and the actors, in particular the latter.  Despite its two-hour running time we never got to really know the characters or their motivations for almost anything they do.

For example, Davus' conversion to Christianity, if based strictly on how its presented in Agora, is based solely on giving out his master's bread to the poor.  Whatever struggle within his soul there was to bring him to embrace Christ was not presented on-screen. Neither were Synesius' moderate Christianity or Orestes' support for paganism at the beginning, let alone his conversion to Christianity, whether it was sincere or calculated is only hinted as being the latter.

We also don't ever follow why any of these men were so passionately in love with Hypatia apart from her beauty.  She is a bit remote, aloof, apart from the goings-on around her rather than being in the midst of things.  Somehow in Agora, there never seemed to be a firm decision to either be a chronicle of the events leading up to the fall of the Library of Alexandria or a love triangle/quadrangle between Hypathia and her trio of suitors.

Curiously, whatever romantic thoughts either Orestes or Synesius held for Hypatia appears to have disappeared by the time the Library is first ransacked.  While Davus continues to hold some kind of torch for her, we never see what exactly attracted him to her or why/whether he kept pining for her long after he embraced some form of Christianity. For a film that portrays Christians as unthinking mobs, we don't see why anyone could be moved to join the movement in the first place.

I don't think this is the fault of the actors in Agora.  Weisz is a good actress, so her portrayal of Hypatia as bright but removed from any emotions is correct: she is more excited about finding how the Earth revolves around the Sun than about people being killed all around her. We never, however, really figure out what drives her as a person.  As a scientist, perhaps, but as a person, a woman, she is treated like one of the statues the Christians want to destroy.

Isaac is similarly hampered by his Orestes, someone who is remarkably dispassionate about almost everything , even when courting Hypatia by playing reeds.  Evans has the same fate: whatever reason he remains faithful to Christ while pursuing the studies could have played well in the embrace of faith and reason, but he's not given much to do on-screen.

Minghella suffers the most: while he is suppose to be the heart of Agora, his expressions rarely go past two: either a scowl involving almost everything going on around and to him and a vague like for Hypatia.

What there is good in Agora is in the technical side: the chaotic siege of the Library and the ensuing battles are well-done, and we do get a sense that Agora is true to what Alexandria would be like in the 4th Century.

There is a positive in that Agora doesn't appear to rely on massive CGI to create the mobs, though the times we get shots of the Earth from space borders on the farcical, emphasizing how "important" the film is.  Dario Marianelli's score at times hammers the fact that Agora is desperate to be an "important" film.

When the Library itself falls, we get a shot of people rampaging through it that is on-screen upside down.  While I get the sense that this represents "a world turned upside down", a little less visual symbolism would have been better.

The split between the stories of the fall of the Alexandria Library and the death of Hypatia appear to be two different films with merely the same characters; given we don't know these characters or motivations all that well, it only makes things more muddled.  Somehow, by taking so long to build up to the climatic siege, everything after that appears anti-climatic.

The biggest flaw in Agora was whenever we see text on the screen filling in information.  It was incredibly difficult to read: I had to zoom in twice to make out what was on the screen, and ultimately the information could have been given in a different manner.

Agora is not a bad film, but it could have been much better if it didn't take itself so seriously.  It would have been better for it to have had a smaller scope: if we had gotten to know the characters, understood their motivations and how they reacted to the sweep of history rather than being supporting characters to the struggle between pagan and Christian, reason and faith.

Ultimately, Agora is a bit confused, and given that the subject of the film is Hypatia is the Queen of Rational Thought, that's ironic. 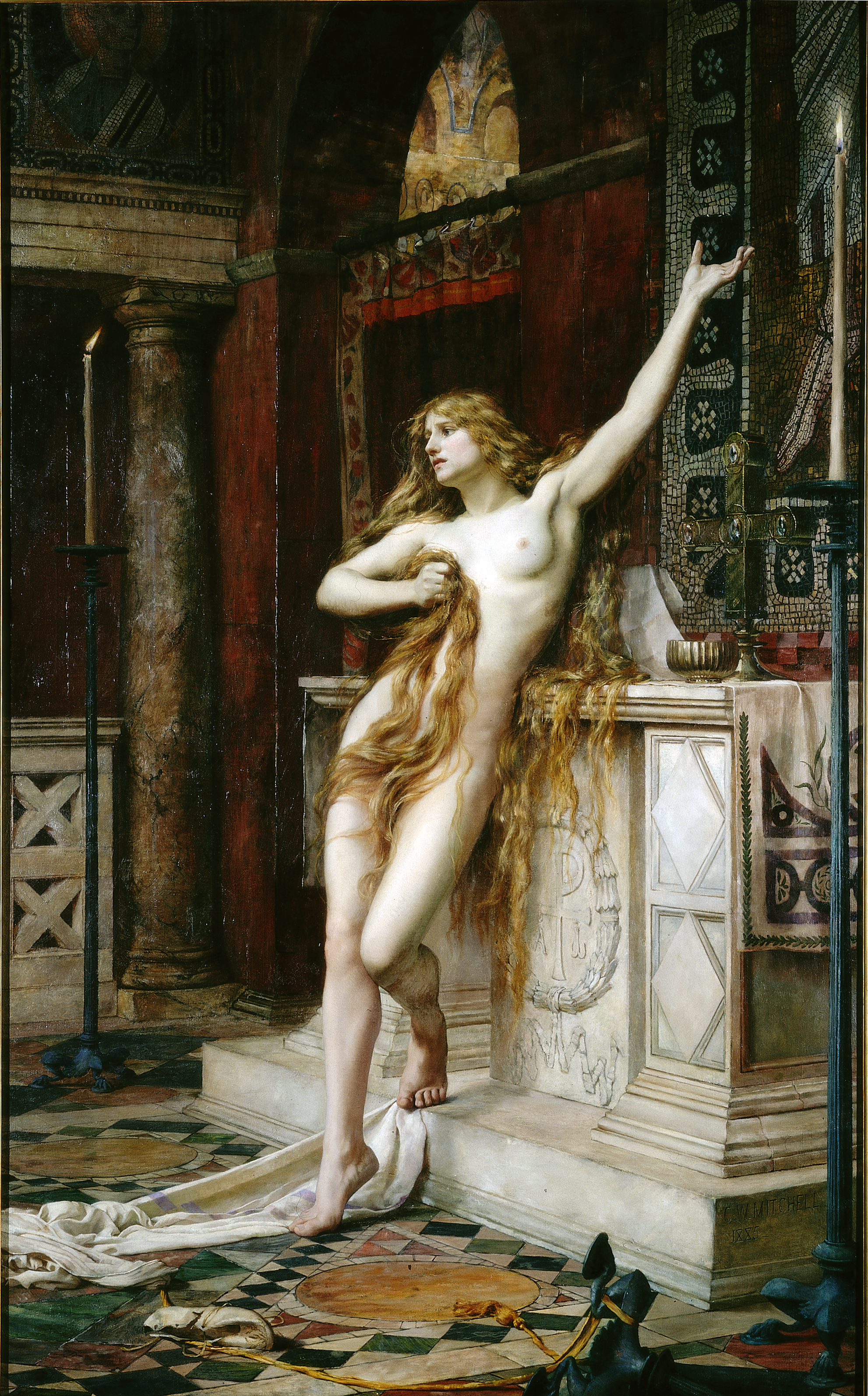