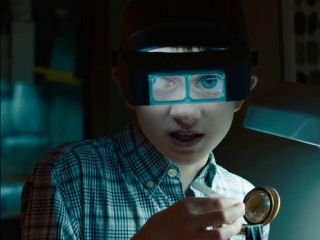 In Extremely Loud & Incredibly Close, our protagonist tells us helpfully that he was tested for Asperger's but that the tests were inconclusive.  If he doesn't have Asperger's, then this kid is really just an ass.

That is, if he doesn't have Asperger's.  If he does indeed have Asperger's, and I'm inclined to believe he does, then it just makes it merely frustrating at times to watch but it doesn't excuse his behavior or make how other people react and behave any more logical.

The story is told from the voiceover of Oskar (Jeopardy! Kids Week Champion Thomas Horn), who has issues long before "The Worst Day" as he calls it.  "The Worst Day" happens to be September 11th, 2001.

On that day, his father Thomas (Tom Hanks) died at the World Trade Center.  In flashbacks we see that Thomas is the Best Dad Any Boy could ever have: always getting his son to have adventures, mostly looking for the mythical 6th Borough of New York City.  Thomas is just the greatest: a father without flaws of any kind.

If you're getting annoyed at my constant use of the phrase 'The Worst Day', I'm only repeating what Oskar repeats.

He's hidden the answering machine that has Thomas' six final messages and not letting Linda know her husband had called on "The Worst Day".  However, to move a story along, Oskar finally has the courage to enter Thomas' closet, and while there, he finds a key in an envelope labelled "Black". 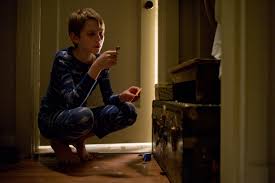 Oskar comes to what to him is a logical conclusion: this key is Thomas' final message to his son, one last game between father and son so that his final eight minutes can be extended.

Oskar, in voiceover, tells us that if the sun were to explode, we on Earth wouldn't know for eight minutes, blissfully aware that we were all going to die, hence the analogy.

If he doesn't have Asperger's, he's definitely got issues.

He decides that "Black" is a surname, and that he has to find every person named Black in the five known boroughs of New York City to see what the key opens.

Being at the very least methodical, Oskar decided to go through the phonebook and find every Black in New York City: all 400-plus of them.  Oskar already has issues before "The Worst Day", but "The Worst Day" only intensifies his fears: one of them is a fear of public transportation.  Since he cannot use the subway or buses, he goes around New York City on foot, walking from Manhattan to Brooklyn, the Bronx, Queens, and Staten Island.

I figure since he's afraid of public transportation, that rules out the Staten Island Ferry, so he'll either have to row himself there or swim, if he isn't afraid of the water.

There's no problem skipping school, or having a ten-year-old roaming around NYC on foot with only his damn tambourine to protect him.

On his journey to find the Black, he has various encounters.  We start with Abby Black (Viola Davis) who is having a very bad day but allows this little chatterbox to come and even to take her picture.  Various short glimpses of other Blacks, but still no one knows nothing about Oskar's key or of Thomas.

During his hunt, he is joined by a mysterious figure known as The Renter (Max von Sydow).  We know he's The Renter not only because everyone refers to him as "The Renter" but because when Oskar goes to his grandmother's he doesn't find her but finds the man who is 'renting' from her.  The Renter has a mysterious link to Oskar.

To tell you would be to give things away, but here's a hint: The Renter shrugs his shoulders just like Thomas, the Bestest Dad in the World.

In this journey, we get glimpses of exactly why Oskar is so haunted by the answering machine from "The Worst Day", we do get the story of the Black Key, The Renter runs, from the beyond Thomas sends one last final message, and Linda and Oskar come to a peaceful co-existence.

While watching Extremely Loud &Incredibly Close, my mind started wandering from the film and onto the Black.  I started wondering about other people Oskar might encounter, and began making my own list.  During the film, I started to wonder if he would eventually meet the following people:


And of course, the Citizen Kane of Black-surnamed personalities...
Yes, at one point in Extremely Loud &Incredibly Close, I actually started to make a list of people with the surname Black, because Oskar's fixation was either contagious or simply loony.

A lot of Extremely Loud &Incredibly Close is hard to believe.  Chief among them is the idea that any sane parent would allow her 10-year-old son to wander around the streets of New York City unguarded, or that, as we learn, she was fully aware of Oskar's adventures, she wouldn't inform Grand-mama that her son was running around the city with someone whom he was to avoid him at all costs.

Moreover, the idea that The Renter would introduce himself as "The Renter" is something that might work in Jonathan Safran Foer's novel, but when translated into a movie, the device is just far too cutesy to be believed.

I'm going to put the believable factor aside for a moment.  Instead, I'm going to turn my eyes to how Stephen Daltry decided to not direct anyone towards anything that can be called a good performance.  Hanks does another variation of Larry Crowne, that happy-go-lucky character who is just about the sweetest most lovable person ever.

As portrayed by Hanks, Thomas is without flaws, and I'm willing to cut some slack in terms of how a child would remember a lost father, but somehow Hanks and Horn came off as annoying together: the perfect father, never cross, always patient and eager to do all sorts of things with his son.

I'm  not asking for conflict in all characters, but I would like at least a moment where Thomas had another type of emotion other than generally cheery. 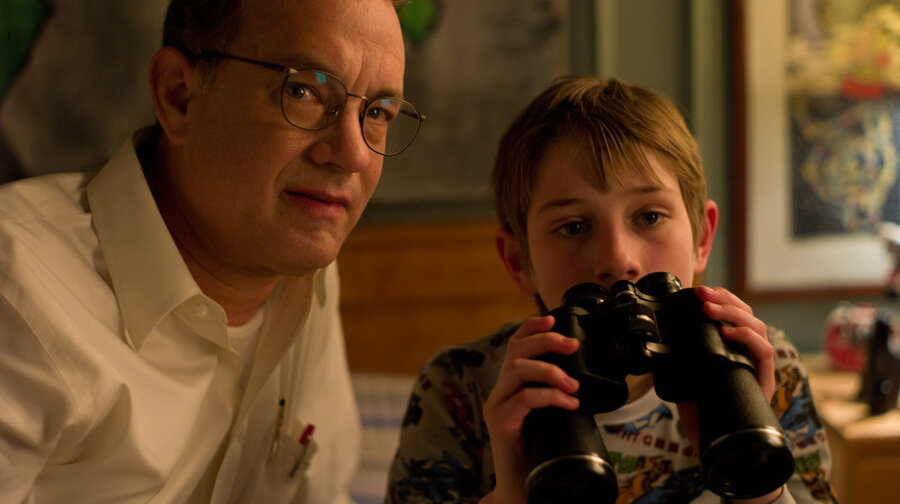 Bullock doesn't do anything in the film.  There's a scene where we see her talking to Thomas over the phone on "The Worst Day", and everything in that particular scene in terms of her performance just looked wrong.

She wasn't actually acting; she was acting like she was acting, as if she didn't believe the situation her character was in but was doing her best to pretend to do so.

We also have to deal with a serious problem of just how inept Linda is in helping Oskar with his grief: as far as we know we don't ever see a moment where either of them sought counseling, which given both the circumstances and his potential mental issues would be highly recommended.

It is unfair to go after Horn for his robotic interpretation of Oskar.  He's not an actor, and perhaps he may never act again.  However, as intelligent as Horn may be in real life, he doesn't have the skills or abilities to make Oskar anything other than a nightmare to endure.

Again and again the word "annoying" kept popping up in my notes.  It isn't that Oskar's idiosyncrasies make him hard to spend time with; it's that Horn almost goes out of his way to make Oskar extremely unlikable.  In his incessant directness, in particular how he insults people to their faces, in his playing of the damn tambourine to calm him down, in his selfishness and thoughtlessness, one can't bring themselves to care about him.

One particularly horrifying scene was when Oskar tells The Renter the story of his journey: not only do we have to listen to Horn's robotic recitation of his lines but he does it in a rapid-fire delivery and we're treated to clips from everything we've seen already.

This scene was an absolute nightmare to watch and I am amazed why Daltry or screenwriter Eric Roth couldn't restructure the book to make this flow easier rather than have us go through information again.  Given that we not only got treated to a scene of Oskar going into Dad's closet but a voiceover confirming this, I figure subtlety is not Extremely Loud &Incredibly Close's strong suit.

In fact, many scenes in Extremely Loud &Incredibly Close are there to call attention to themselves, but the effect is to make things almost grotesque.  Near the end of the film, we see how Thomas' last call ended, and Oskar falls in an amazingly over-dramatic manner to where it is almost farce: this scene of Horn collapsing oh-so-poetically as the second tower collapses is just ugly both in how it looks and what it reflects; worse, it also looks completely fake.

We are treated to two quick moments of Hanks falling from the World Trade Center, and to my mind, there is something creepy, wrong, even immoral about shooting such horrifying moments in an excessively poetic manner. 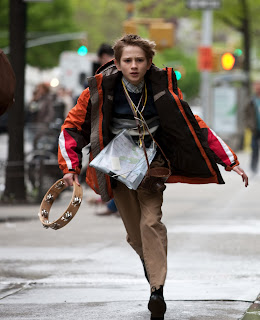 There's something in my mind that makes the whole thing wildly wrong: not only is the story forced in its efforts to paint the horror of September 11th through the eyes of a child but everything in Extremely Loud &Incredibly Close plays far too manipulative to be believed.

I don't think eleven years is 'too soon' to make a September 11th film, but Extremely Loud & Incredibly Close is not that film.

The big problem is that Oskar is just so unlikable.  It has nothing to do with Asperger's, more with the fact that Horn could not make Oskar someone we could genuinely root for in his quixotic quest to unravel an uninteresting mystery which itself is technically resolved but leaves us without an actual resolution.

Granted, I've never read the novel, but now I have even less reason to do so if the material is as bad as the cinematic result.

I now realize why they named their child Oskar...because Extremely Loud & Incredibly Close was thinking Oscar.