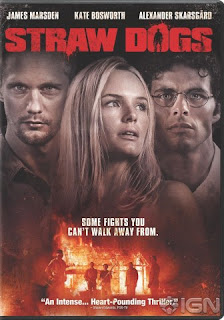 It may be a disadvantage that I have yet to see the original 1971 version of Straw Dogs.  Perhaps I won't notice if something, shall we say, was lost in the translation.  What I can say about this version of Straw Dogs is that while watching, one idea kept coming back again and again.

This version of Straw Dogs would make A Great Comedy!

If the people behind the remake of Straw Dogs had decided to ditch the faux-intellectual vs. redneck feud and focused on the clash of cultures, you could  have had a delightful laugh-filled romp.  Instead, they decided they were going to make a shocking suspense-filled bore, with story threads that don't connect and characterizations that appear to come from fifty years ago.

David Sumner (James Marsden), a screenwriter, and his actress wife, Amy (Kate Bosworth) move from their Los Angeles home to Blackwater, Mississippi to take her father's old house after his death.  David hopes to continue his newest script on the Battle of Stalingrad, while Amy repairs her father's old home and heals from his death.

Amy's past isn't far behind: her old beau, former football star Charlie (Alexander Skarsgard) is still in Blackwater, and as it so happens, a contractor. As such, Charlie is hired to repair the Sumner home.

Charlie and his crew are boorish: listening to country music and drinking on the job, then cutting things early so they can go hunting.  All of Blackwater lives up to Amy's nickname for her hometown of 'Back-water'; the town has a local drunk, angry former football coach Tom (James Woods), and the village idiot Jeremy (Dominic Purcell) who has a curious relationship with local nymphet Janice (Willa Holland), who happens to be Coach Heddon's daughter.

The ultimate sign of Blackwater's hickville status is that no business in Blackwater takes credit cards!

To these hillbillies, David isn't a real man either: he can't change a tire and types for a living and listens to classical music while doing it, and worse, doesn't like hunting!  Soon, there is an undercurrent of hostility between David and Charlie, more so since Charlie still wants Amy.

Amy seems conflicted: while she loves David and looks down at her redneck neighbors, she also insists that David participate in hick activities like going to picnics, to church, and even high school football games.

She also does some sort of angry striptease while they work, so we know things aren't going to go well.

David is taken on his first hunting trip by the boys, and Charlie goes to their house and semi-rapes Amy.  I say semi-rapes because while Amy doesn't want to have sex with Charlie, she doesn't put up much a fight.  However, when Norman (Rhys Coiro), another of Charlie's friends enters the house and forces sex on her, Charlie just stares in shock. Despite this, Amy doesn't tell a clueless David what has happened.

Things come to a head at the football game.  Janice finally gets Jeremy to try to fool around, but when the drunken Coach goes in search of her, we find that the Blackwater Lenny silences the Blackwater Lolita.  Jeremy gets hit by an angry David who left the game with an angry Amy.  Coach, along with Charlie and his work crew, now lay siege to the Sumner home, demanding they hand over Jeremy.

In the melee, Sheriff and local Iraq veteran John Burke (Laz Alonzo), apparently Blackwater's only black resident, is shot.  Now it becomes total war, with the meek David finally going all Commando on the hillbilly brigade.

Straw Dogs' writer/director Rod Lurie is simply trying too hard to make this film overtly symbolic with his metaphors.  The best, or worse, example is when he juxtaposes David's hunting with the attack on Amy.  We go back and forth between them, and the symbolism of David going hunting for an innocent animal and Charlie going hunting for an innocent woman is laid on way too thick.

Truth be told, almost everything is laid on way too thick.  We're pounded with the idea that the people in Blackwater are unsophisticated compared to the worldly Sumners.  You even had the requisite Lynyrd Skynyrd song at the local bar, which apparently the whole town, even the black sheriff go to.

As if to force the issue, we're treated to bumper stickers of the Stars and Bars. I confess I was waiting for them, and when I saw the old Confederate flag on the screen, I knew Straw Dogs was going whole-hog in its idea that the American South of 2011 is still a hotbed of yahoos and idiots.

The subplot of Jeremy not only appears to be from a different story altogether but never appears to be part of the story of David vs. Charlie until its forced into it.

Amy's decision to not tell her husband about her rape is perhaps the most puzzling in Straw Dogs. I wrote in large letters TELL HIM THEY RAPED YOU!.  She is very upset about her cat getting strangled, but when she is raped she keeps silent? It seems too outlandish to accept. 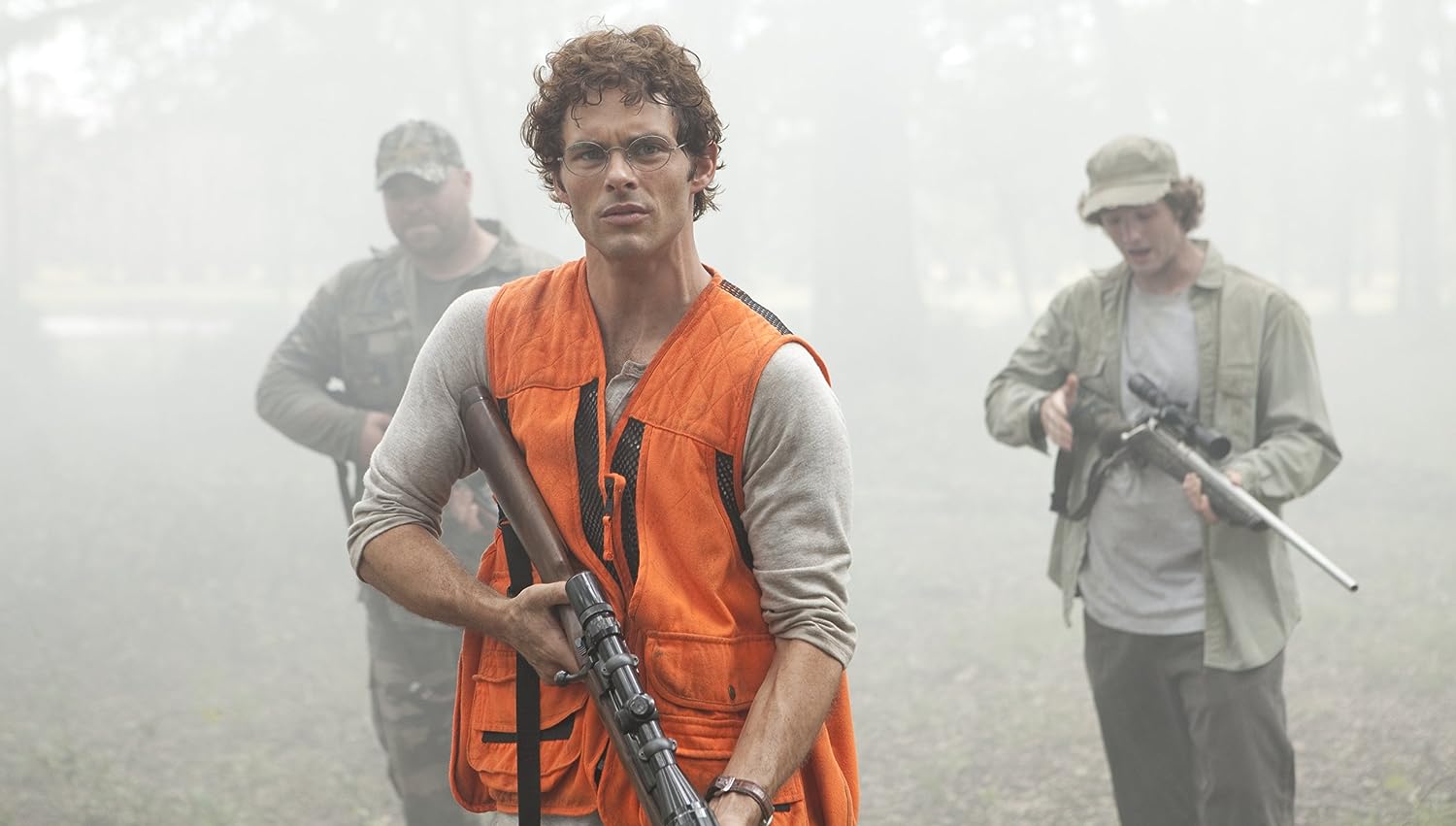 It is unintentionally funny when Sheriff Burke is shot down.  It only brings up that old cliche about the black guy being the first one killed.  As it stands, the Sheriff never really takes a prominent role in town, having no problem allowing these hicks to basically do as they please.

In terms of performances, I think Purcell was wildly miscast as the Lenny from Of Mice and Men-like Jeremy.  Not only does he look far too beefy to be seen as this gentle innocent but he's not given much to do other than stare and mumble about being Janice's boyfriend.

It's laughable that someone as large and physically strong as Purcell would be beaten up so easily by someone as comparatively small as Woods.  Woods, who is among America's better actors, had just one-note to hit: that of the angry drunk, and he went all-out on that front to where it did appear to be farcical how he devoured the screen.

Marsden did a good job in making David a wimp but not in making him an intellectual.  For most of Straw Dogs, David is less opposed to violence and more unable to stand up for himself.  Whenever anyone challenges him, he never uses his alleged intelligence to deal with them.  Instead, he retreats, and one can't really rally around someone who won't rally in the first place.

Bosworth has no emotional range to her, even after undergoing a traumatic gang-rape.  Her decisions before and after are just stupid and illogical.  As for Skarsgard, I give him credit for having a strong Southern accent, though I imagine his time in Bon Temps gave the Swede a leg-up on that.  However, Charlie does nothing but smolder and show off his body throughout the film.  Whatever anger there was that his glory days are long gone is never communicated.

As a sidenote, perhaps it works in the overall story, but I was amazed how Charlie towered over David.  Given that Skarsgard is 6'4" to Marsden's 5'10" it's not a surprise, but when they are put together the half-foot difference between them appears startling and a little distracting.

Again and again while watching Straw Dogs, I thought it would have made a great comedy.  The curious thing is that at times it actually played like one: the village idiot and the crazy drunken coach with the lusty daughter becoming more and more hilarious.

The idea that Straw Dogs is a story of a man finally standing up to those threatening him and his wife becomes lost in a collection of cliches and stereotypes, story threads that don't connect, bad performances, a heavy-handed effort at symbolism and a fixation on Skarsgard's physique.

Ultimately, this remake of Straw Dogs is a weird hybrid between The Wicker Man and Deliverance.  Not only is it a bungled effort to redo a film that perhaps shouldn't have been remade, but it rips off better films too.

Put that up as another crime Straw Dogs committed.