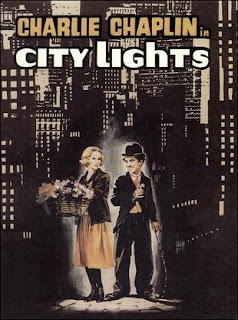 The Look of Love Is In Your Eyes...

For Valentine's Day, that date set aside to remember romance, I decided to look at one of the most romantic films: City Lights.  It's unique in that it is a silent film when the genre was all but dead.  For a good part of it I could appreciate the craftsmanship that went into City Lights, but was beginning to wonder how it could be considered one of the Greatest Love Stories on Film, until we get to the end.

The Tramp (Charlie Chaplin) has met a beautiful but poor Flower Girl (Virginia Cherrill).  He falls instantly in love, but because she is blind, she mistakes him for a wealthy gentleman.  Through a series of fortuitous accidents, mostly involving The Tramp first saving, then re-encountering a Millionaire (Harry Myers), he allows the Flower Girl to believe that he is a rich man.

Determined to provide for his unrequited love and her grandmother, he gets a job collecting horse manure, then after losing that job he goes into the ring to pay for both their back rent and for a revolutionary surgery to cure her blindness. 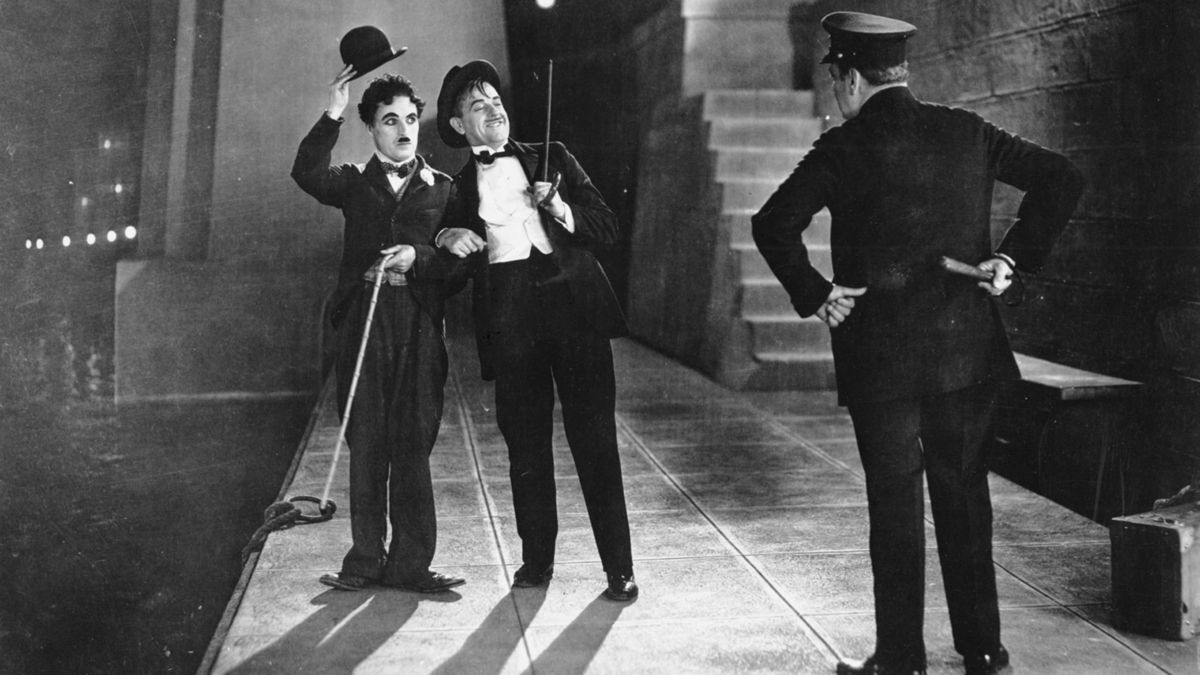 While the boxing match goes against him, he has the good luck of re-encountering the Millionaire, who only remembers him when he's intoxicated.  He gives the Tramp a thousand dollars, but unbeknownst to either of them, two thieves had entered the mansion.  They conk the Millionaire but while the Tramp gets the police, the Millionaire doesn't recognize him and The Tramp is sent up the river.  However, before he's finally caught, the Tramp manages to give the Flower Girl the money.

After serving time for theft, the Tramp goes back, with no money, no job prospects, and looking worse for wear.  The Flower Girl, who was able to afford surgery to restore her sight, has now a successful flower shop with her grandmother.  Every time a wealthy man comes, she hopes it's Him.  However, she knows He hasn't come in yet.  Some newspaper boys bully the Tramp in front of her store.  The Tramp recognizes her immediately, but she is amused at him and his longing gaze.  Touched by his affection, she offers him a flower and some change.  When she reaches for his hands, she instantly realizes who he is.

"You?"  the title card reads.  The next two title cards are some of the most beautiful and heartfelt lines of 'dialogue' in film.  The Tramp: "You can see now?"  The Flower Girl: "Yes, I can see now".  We close City Lights on his face, one filled with love and hope.

It's those last five minutes which are the most beautiful.  After going through so much for the woman he loves but who has never seen him, here he is before her.  Although he's dressed in rags, we know he's a very rich man, because his unselfish love has given so much and the girl of his heart now can finally see.

Obviously the last two lines of City Lights are loaded with subtext beyond what is actually being referred to.  Chaplin, who also directed the film and wrote both the script and the score, created a beautiful moment here, one of the most touching and heartbreaking in film.  The juxtaposition of his rags and her success and elegance is beautifully filmed.

Chaplin was inventively clever with his various sight gags: everything from how the Millionaire pours champagne to his intoxicated driving and how the Tramp inadvertently interrupted a singer after swallowing a whistle.  While they were clever and well-done, I confess to not finding them as funny as perhaps 1931 audiences did because I saw most of them coming.

This isn't to not appreciate his physical gifts or the inventiveness of the various sight gags, except I wonder in the scene where he's cleaning manure how an elephant just happened to walk by him, but for my part, I don't think I laughed much if at all whenever I saw them.

However, it is hard not to like the Tramp himself, and Chaplin's performance is wonderful.  Apart from his physicality, there is the character himself, who is so endearing.  With his bowler hat and cane, he tries so hard to appear as a respectable bourgeois gentleman when he obviously is not a man of wealth and sophistication.  We see this when the Millionaire takes him to an exclusive dance hall: he is so unaccustomed to good food he can't tell that a streamer thrown in celebration isn't part of his meal. 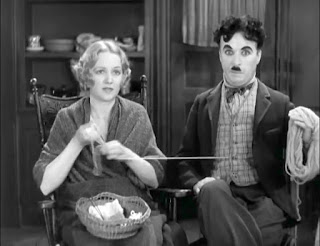 Cherill's performance is one of sweet innocence, beautifully lit by Chaplin.  In other films, when the Flower Girl sees the Tramp for the first time, we could have had a mean response from her.  However, her laughter appeared light, more amused that this little man would take a shine to her than a belief in her superiority.  When she realizes who he is, her expression is one not of horror, but of understanding and sadness that such a good man should be in this sorry condition.

It matches Chaplin's expression of genuine joy to see her healthy and successful.  We can see in his face that he did all he did and went through all he did for the simple reason that he loves her, no more, no less.

If there's something that threw me off, it was in some of the sound effects Chaplin used now that sound films were the dominant force and silent films were basically out.  In particular, in the beginning when we 'hear' the Mayor and his wife giving short speeches to unveil a statue where instead they reveal the Tramp, peacefully asleep on it.  I think it would have been better not to have sound effects, but Chaplin decided to make some sounds mimicking empty speech.  However, today they sound like the adults from a Peanuts special (wa-wah wa-wa-wa-wah).

Maybe it was his subtle comments on sound films themselves.

On the whole, City Lights has clever sight gags and Chaplin's excellent score.  The comedy bits I didn't find overwhelmingly funny, but those last few minutes are impossible to react to emotionally. It's such a beautiful and tender scene, and says so much about love: the beauty of it, the sacrifices that go into it, and how true love will be rewarded.

City Lights is at its heart as it is billed: A Comedy Romance in Pantomime.   There's comedy, but at its heart it is a romance: a gentle, sweet love story between two people on the fringes of society. 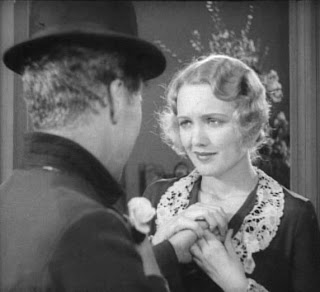 In their silence, they've said all there is to say about love.