It is hard for me to watch The Beaver.  I would not have paid money to see a film with the virulent racist/sexist/homophobic/anti-Semitic person known as Mel Gibson.   Few people have come with such great talent only to see their own horrifying nature overwhelm whatever affection they had.

If it were not for Anton Yelchin and Jennifer Lawrence, two of our better actors, I would never have bothered with The Beaver, despite it having one of our best actresses, Jodie Foster, as both co-star and director.

After seeing it, I realize it really was not worth paying for.

Walter Black (Gibson) is suffering from an overwhelming melancholia; we know because we get that old standby, the voiceover, and one from an unlikely source but more on that later.  This depression, coming from an unknown source, has driven his family away: his wife Meredith (Foster), older son Porter (Yelchin) and youngest Henry (Riley Thomas Stewart).

One night, his melancholia along with booze, has so overwhelmed him he plans to kill himself.  He has the booze, and along the way he catches the glimpse of a hand puppet in the shape of a beaver.  Walter bungles the job, but the next morning he finds that the hand puppet now speaks to him with a voice that sounds like Michael Caine.  The Beaver, as he bills himself, now grants him a way to express what's on his mind. 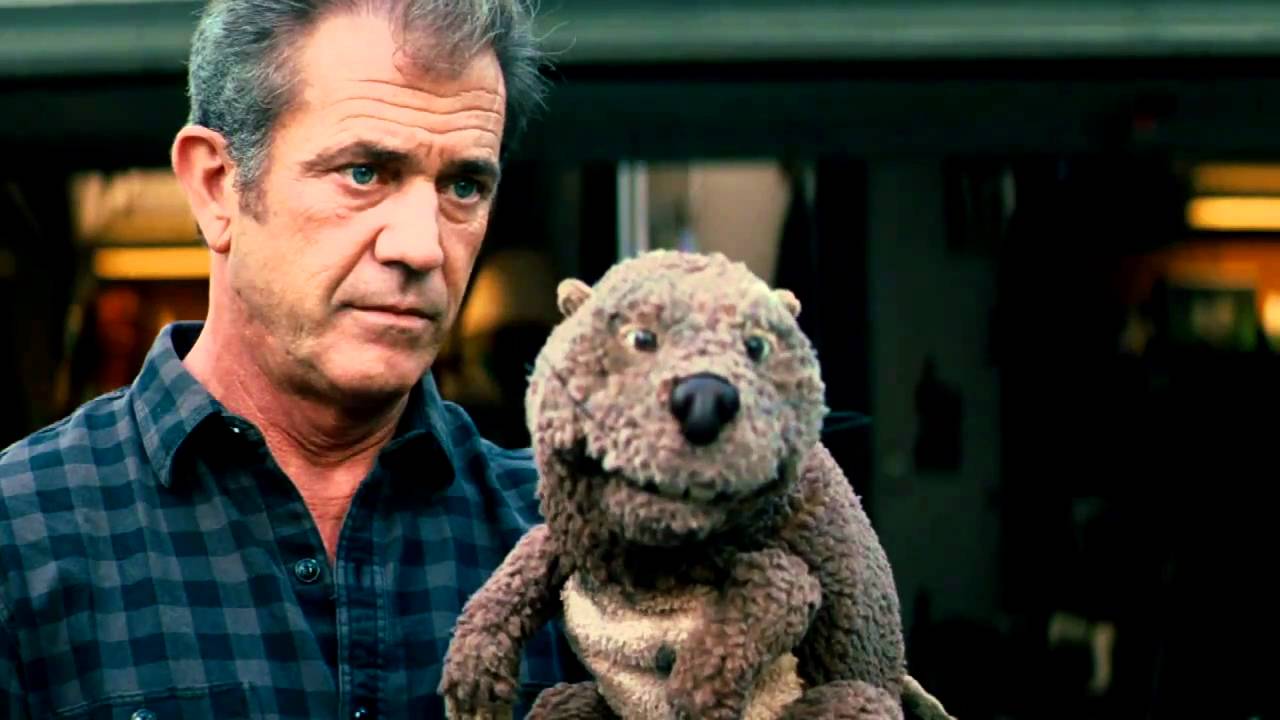 While Henry is thrilled to see Walter and the Beaver, Porter is determined to remove every similarity between himself and his dad whom he despises.  Porter, a bright fellow, has been running a side line: writing other people's papers for pay.  Business has been good, so good that the valedictorian Norah (Lawrence) has hired him to write her graduation speech.  Porter has his own issues, in particular his lingering resentment of Walter and fear he'll turn out just like his dad (cue Cat's In the Cradle), and the way he deals with this is by literally beating his head against the wall.

Walter's beaver has given him a new lease on life, but he now appears to be completely attached to it in almost every way: he showers with it, sleeps with it, even goes back to being the president of his toy company with the Beaver as his spokes-creature.  The loyal Vice President of JerryCo. (Cherry Jones) is slightly puzzled by Walter and the Beaver, but not enough to question either Walter or his plans to introduce a new toy: a Beaver woodcarving set.  T

he toy is a hit, such a hit that again, no one on JerryCo.'s board appears nonplussed to have their CEO go on The Today Show with The Beaver and have the Beaver do all the talking.

No one, after all, would think Walter (or Mel Gibson for that matter) could be considered insane.

The Blacks handle all this in different ways.  Meredith is amazingly patient with Walter's new puppet even making love to him (Walter, not the Beaver, but with the Beaver still on his arm); however, she draws the line at having to have a romantic anniversary dinner with the Beaver wearing a tux.  Needless to say, Walter doesn't take that at all well.

Porter would normally not care about Walter, seeing he's too busy attempting to romance Norah.  However, he makes a mess of it: first, by bringing up her dead brother metaphorically, then by getting arrested for tagging on their first date.

As it turns out, Walter's recovery thanks to the Beaver takes a psychotic turn: he now comes to believe the Beaver is fully and independently alive, and rather menacing at that,. Porter meanwhile has both lost the girl and had his paper-writing business exposed, which causes his acceptance at Brown to be rescinded.  Walter's mental collapse is complete after he tries to get rid of the Beaver in a remarkably gruesome way, while Porter now seems to be falling into that melancholia good old Pop got into.  Eventually, both Walter and Porter realize there is still a bond between them, and The Beaver ends on an upbeat note. 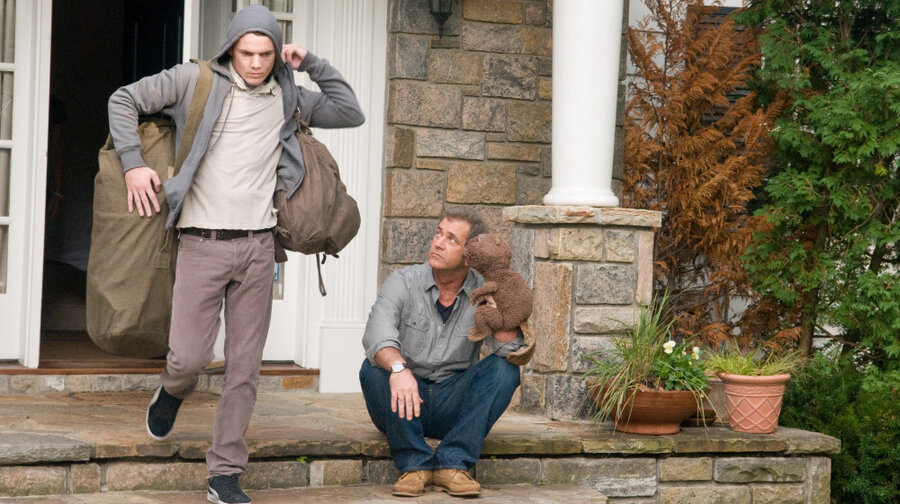 I figure it's easy to tell that The Beaver is Kyle Killen's first film screenplay just by the weird turn the third-act takes.  Allow me to digress on the subject of the story.

The Beaver asks a great deal of me.  It asks me to believe that people, rational people, people of some intelligence, would allow someone with Walter's deep issues to do things no rational let alone sane person would do.  The biggest implausibility is when Walter goes on national television with a puppet on his hand, and said puppet does all the talking for him to where Matt Lauer in a cameo basically has to address the puppet (not the first time I imagine, but I digress).

What is truly astounding about that is that it appears no one: not his wife, not the board, not the Vice President of the company, ever stopped and said, "if the CEO of our company goes on national television with a hand puppet and insists on having others address it as if it were real, people might think he's, well, bonkers".

Throughout The Beaver I kept saying and thinking to myself, "Please, get this man institutionalized".  It was obvious that Walter was quite ill, and while it's understandable that people would go along with the Beaver by the time Meredith and Walter have sex while he keeps the Beaver on him, I would have thought that everyone would see clearly that the puppet had become a crutch. Anyway, once we get that third-act twist where the Beaver now takes on a life of its own, it looks like Killen had slipped into horror-movie mode and attempted to get a Twilight Zone-like feel to The Beaver where it wasn't needed.  It's bad enough we really never know what brought about Walter's melancholia, but when we see him at war with his own hand he's gone beyond depressed into being downright bonkers.

The peculiar thing about The Beaver to me is that while we have the idea that the film may be a comedy or at least have aspects of comedy, particularly through Marcelo Zarvos' score, the tone shifts from time to time to heavy drama.

Moreover, The Beaver appears to have two stories: Walter's melancholia and Porter's melancholia.  It would have been nice to see them come together, but they never seemed to meld into one story.  When we weren't watching Walter and his antics with his puppet, we saw Porter trying to woo the smartest girl in the world.

If I might slightly digress, I never quite understood the scandal over Porter writing papers for other; it was not the fact that it was wrong for him to do so. It was how he was discovered.  If I understood it, he was exposed because the grandmother of one of his clients didn't believe her grandson could have written the paper and promptly went to the principal.  I never truly believed Porter would be so exposed in that fashion.

Now, I can see where the effort to make Walter and Porter have parallel lives since the son went into a depression mirroring the father's.  However, at least we know where Porter's depression came from, something we never saw with Walter.

Watching The Beaver, we do see where Mel Gibson still has the skills to give a good performance, but given his own meltdowns, it is hard to be sympathetic to someone who repulses you.  While Gibson does a good job showing us Walter's depression or plays his scenes with the Beaver in as realistic a way as possible, once the Beaver becomes possessed it just veers into farce.   Foster's role was a bit small but like Gibson, she was effective as the woman caught in a bizarre situation and doing the best she could.

For my money's worth, the best moments were between Yelchin and Lawrence, and their story was more interesting than Walter's.  I might have watched a film about them rather than the adults.  Both of them showed the slow fascination with each other mixed with a hesitance to get together.

In the end, it isn't the fact that Mel Gibson is at the very least a highly troubled individual man in real life that would make me not recommend The Beaver (though granted, I have problems watching him on the screen).  Rather, it is the "shocking" twist involving the Beaver itself that I found was a bridge too far for me.  I thought it a silly way to get rid of the character.

It also was a bit much to accept that people would willingly put a major company in the hands of someone who is clearly not in complete control of his mind.  The Beaver was a good shot at a potential story, but we really don't get a lot to munch on.