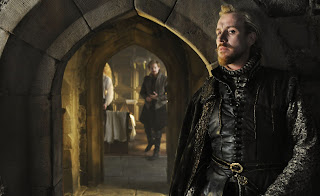 A Battle of Wills...

I am a firm believer that the author of such works as Hamlet, Romeo & Juliet, The Merchant of Venice, The Taming of the Shrew, Henry V, Richard III, A Midsummer Night's Dream, and The Tempest among many, many others is one William Shakespeare of Stratford-Upon-Avon and no one else wrote the plays or the sonnets under his name.

Now that bit of wisdom has been challenged in film.  Anonymous purports to tell the True Story: that the man we know as Shakespeare was really a front for a high-born nobleman: Edward De Vere, 17th Earl of Oxford.  The idea that Shakespeare did not write Shakespeare has been around for a long time, and the candidacy of Oxford is now the latest one.

Anonymous, oddly, doesn't make its case by doing anything as mundane as providing any evidence to back up this claim.  Rather, it gives us a rather perverse albeit visually interesting view of Elizabethan theater and court intrigue, one that ultimately drowns in its own seriousness. 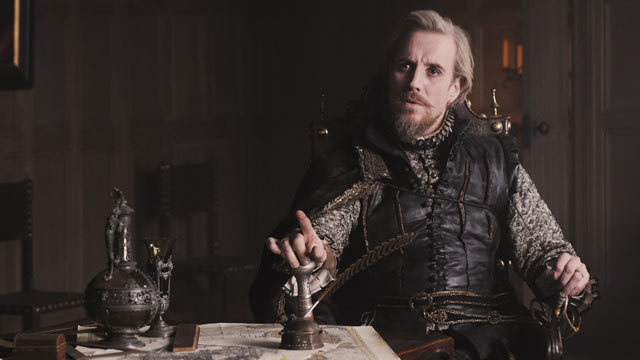 We begin in present-day, when Sir Derek Jacobi is rushing to the theater.  Once there, the curtain literally rises as he begins to present his proof that one Will Shakespeare could not have written the plays, poems, and sonnets credited to him; Will's father, a glove maker, of all things, his wife and daughter were all illiterate (ergo, Will couldn't be educated).

With that, we have a transition to the main setting of Anonymous: London just as Her Majesty Queen Elizabeth I is in her final days.  Poet and playwright Ben Jonson (Sebastian Armento) has been taken to the Tower for questioning at the hands of Robert Cecil (Edward Hogg), the hunchback son of the late Master Statesman William Cecil (David Thewlis).  He wants to know where 'the plays' are, the ones he was seen with just as Cecil's men burnt the Rose Theater in an effort to literally smoke Johnson out.

We jump five years earlier, where Jonson is watching his latest work performed.  Among those in the audience is the Earl of Oxford (Rhys Ifans).  Oxford now believes he's found the perfect man to serve as his stooge.  He presents Jonson with a shocking proposition: Jonson will take the plays De Vere wrote and present them as Jonson's own works.  De Vere, as a nobleman, cannot be seen to be associating with literature, so he obviously cannot take credit for anything as lowly as playwriting, especially since he is married into the House of Cecil, and especially with such works as A Midsummer Night's Dream, a personal favorite of the now-doddering Gloriana (Vanessa Redgrave).

Not that he hadn't already written plays before hooking up with Jonson: Anonymous has another flashback within the main flashback where a young Queen Bess (Redgrave's real-life daughter Joely Richardson) is watching A Midsummer Night's Dream, with none other than a young Edward De Vere as Puck!

Allow me to digress for a moment.  In Anonymous, we are suppose to believe a child of around six to ten has come up with a major work of literature already fully formed, with Good Queen Bess being aware that it came from the little one, yet we're also asked to believe that anyone in Merry Olde England would believe that A Midsummer Night's Dream, which had been performed forty years prior to the end of the Elizabethan Age, was written by someone who wasn't even born when she would have seen the play for the first time (Her Majesty died in 1603, so take forty years away and we're in 1563; Shakespeare was born in 1564). 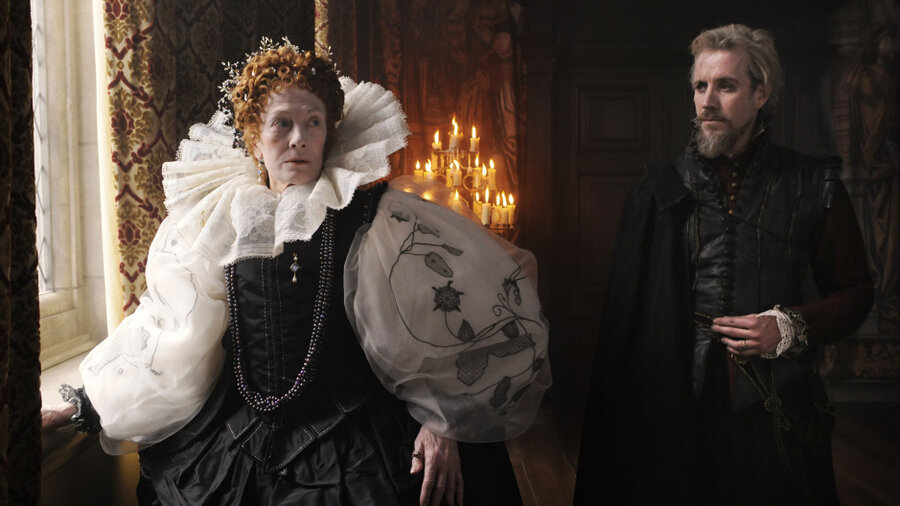 Therefore, if one takes a logical look at Anonymous, by the time Elizabeth I took her last breath she was completely out of it that she died thinking William Shakespeare had written a play she had first seen some forty years earlier when the author wasn't even alive!   Take that, Claudius!

As things turn out, De Vere's perfect scheme would go wildly wrong.  When Henry V premieres to a rapturous audience, who should take credit for this brilliant work but one William Shakespeare (Rafe Spall), a self-absorbed actor who is also an idiot.  When the public clamours for the author, our boy Bill pops out and takes the bows.  While De Vere is infuriated that someone as lowly as Shakespeare: a barely literate actor should take credit for his brilliant works, he decides it will be a fluke.  The plan continues, with Oxford handing Jonson the complete manuscripts of such trifles as Julius Caesar, Macbeth, and Romeo & Juliet all at the ready.

We then shift between the end of Elizabeth's reign and the beginning of it, when she was young, nubile, and extremely horny.  She and Oxford begin a passionate affair which results in a bastard, a situation that according to William Cecil is a regular occurrence for the Virgin Queen.  Oxford learns that the Queen's bastard by Oxford is now the Earl of Southampton (Xavier Samuel).  Shakespeare, meanwhile, blackmails our noble noble for money and to keep the plays rolling along.  However, Oxford finds the dimwit Will has a purpose after all: a subtle attack on the hunchback Robert Cecil via a new play, called Richard III.

De Vere hopes that the anger the play will arouse will somehow help Southampton as well as the Earl of Essex (Sam Reid) get rid of Cecil and now gain Elizabeth's favor.  Naturally, the plan not only flops but Cecil gives De Vere the biggest shock of all: he, Edward De Vere, 17th Earl of Oxford, is really another one of Elizabeth's many bastard children himself!

I digress to point out that, if we are to believe Anonymous, not only had Elizabeth committed incest with her own son and been so idiotically unaware that she was schtupping her own son, but that Essex is simultaneously Elizabeth's son and grandson since he was both her natural son and the son of her own son!

Even more insane, Elizabeth may have been getting on with others in her Court who may have sprung from her virginal vagina (perhaps Southampton himself, thus possible making her son/grandson another lover).  Mercifully, we go back to De Vere, dying but not before giving him his complete works and having a convenient way of having "Shakespeare" working postmortem.

How strange that for all the stubbornness of the Oxfordians or as I like to call them, Shakespeare deniers, Anonymous fails in its efforts to support their claim.  John Orloff's screenplay takes the Oxfordian claim as virtual gospel, so it works straight on through without stopping somewhere in its meandering story to bring about anything that would support its premise.

We see Oxford writing something, which horrifies his wife, but we never have anything that actually shows him taking an interest in writing, no salons where literature is discussed, no circle of people with whom he could discuss writing in general, no memories of love's labors lost in Italy or dealings with Jews in Venice or a temperamental shrew of a wife he was forced to tame.

Furthermore, Orloff's screenplay was ridiculously complicated by the transitions between the time of Old Queen Bess and Young Queen Bess.  We jump back and further back and then back to where we were without any sense of direction as to where the story is going.  It isn't impossible to follow, but it is a bit perplexing why we're jumping around to begin with.

Finally, let me discuss this incest thing.  There is no way to prove that Elizabeth did not have children during her reign; it's highly possible that despite how she did protest too much, the Virgin Queen was not. However, by making De Vere her lover despite their seventeen-year age difference it only makes the whole thing beyond grotesque into downright barbarism and needless barbarism at that.

It really is quite a sick thing to introduce not to mention historically irresponsible. There is no proof that Her Majesty was this wanton slut who screwed every nobleman within reach.  It is one thing to have her take a lover, but to throw in this loony twist makes the entire spectacle both crazy and disgusting.

In terms of the film itself apart from the story, Anonymous does have some wonderful moments, in particular the recreations of the Elizabethan theater world.  Seeing the recreations of how Macbeth would have looked like at its premiere is a highlight of Anonymous.

The work of the costume designers, particularly in Elizabeth's lavish gowns, and the set designers bring a beauty to what would have been a rather dingy London of the Golden Age.

Roland Emmerich, best known for disaster films like Independence Day and 2012 now goes all costume drama with Anonymous, but he still can't get good performances in all the ruffles and feathers.

Redgrave is all dotty as the terribly senile Elizabeth, and her real-life daughter Richardson has nothing to do except look pretty and screw her own son.  Ifans' De Vere poses a great deal but why he was compelled to write is something he couldn't bring to life.  The biggest problem was with Spall: it would be easy to make Shakespeare this shallow idiot, but just making him too stupid to have written Hamlet does not proof make.

The only real good performance was Armento's Jonson: the conflict between the brilliance of the Shakespeare plays with his loyalty to the Crown or fear of the Cecils is brought to full measure by his performance.

I also single out Robert Emms as fellow playwright Thomas Dekker: he showed himself as a dim person who is overwhelmed with passion at the brilliance of the plays, even crying at one point. If perhaps Anonymous had focused more on trying to ferret out how an allegedly dumb actor suddenly comes up with brilliant plays, even ones written before he was born, we could have had at least a good movie.

Ultimately, Anonymous doesn't prove Edward De Vere, 17th Earl of Oxford, is the true author of the plays of William Shakespeare.  It has good moments of drama courtesy of the real Shakespeare, but all the costumes and sets can't cover up some awful performances and a jumbled story-line that goes past and present with abandon.  Frankly, if Anonymous is the best Oxfordians can come up with, the Sweet Swan of Avon can rest easy.

Finally, I add my own Personal Reflections on Anonymous and the Oxfordian debate.