Normally, one doesn't need to know much about Greek mythology to enjoy a film like Immortals, let alone follow the story.  However, Immortals I figure assumes you know a great deal about the Greek gods and heroes, otherwise we would have had proper introductions.

Borrowing heavily from films like 300 and Clash of the Titans, Immortals doesn't attempt to actually tell a story as to drown an audience with grand visuals, all courtesy of director Tarsem Singh, known simply as Tarsem.

A voiceover explains it all: there was a War in the Heavens.  The victors declared themselves gods, the vanquished were called Titans and imprisoned within the bowels of Mount Tartarus.  However, a mortal, Hyperion (Mickey Rourke) has got it into his head that the gods either do not exist or do not care about his plight, so in vengeance he attacks and lays waste to their shrines.  Now, he also goes to the temple to capture the True Virgin Oracle, who has the power of prophesy and can help him gain the Epirius Bow.  With this mythic bow he can conquer the earth although given what we see in Immortals, ain't doing so bad without it.

Hyperion and his army pillage all of Greece, coming close to the village of  Theseus (Henry Cavill) lives with his mother.  Here, he is watched over by an Old Man (John Hurt), but this is no mere Old Man.  It is none other than Zeus himself (Luke Evans).  Zeus has been watching over Theseus for a long time, knowing that this mortal will be a great warrior for humanity and divinities alike.

With the aid of an Oracle Quartet Danse Erotique, Phaedra escapes, as does Theseus and another captive, a professional thief named Stavros (Stephen Dorff).  Now, the gods themselves are forbidden to interfere directly in this war, although it doesn't stop Poseidon (Kellan Lutz) from bringing a convenient sea storm or Ares (Daniel Sharman) and Athena (Isabel Lucas) from jumping into the fracas (although Ares' direct intervention does get him killed, which does make the title Immortals a bit odd).  While Theseus does discover the Bow of Epirius, Hyperion has taken it, and now, a climatic battle between Hyperion's forces and those at Tartarus.

Oh, and did I mention the True Virgin Oracle in all this became a virgin-no-more?  If that's a surprise to you, then you really have little imagination.  As it is, Hyperion is defeated, but with high costs to the divine beings, yet no worries: Zeus, a wounded Athena, and Theseus himself are spirited away to I figure Mt. Olympus, and in a closing scene, Thesus' son has a vision of a massive war in the heavens, while the Old Man watches over him.

Immortals is a hodgepodge of Greek mythology and grandiose visuals Tarsem is well-known for, such as his video for R.E.M.'s Losing My Religion.  What the film isn't is engaging.  Tarsem is so obsessed with the visual opulence in Immortals that he doesn't appear all that interested in either the story or the actual performances. 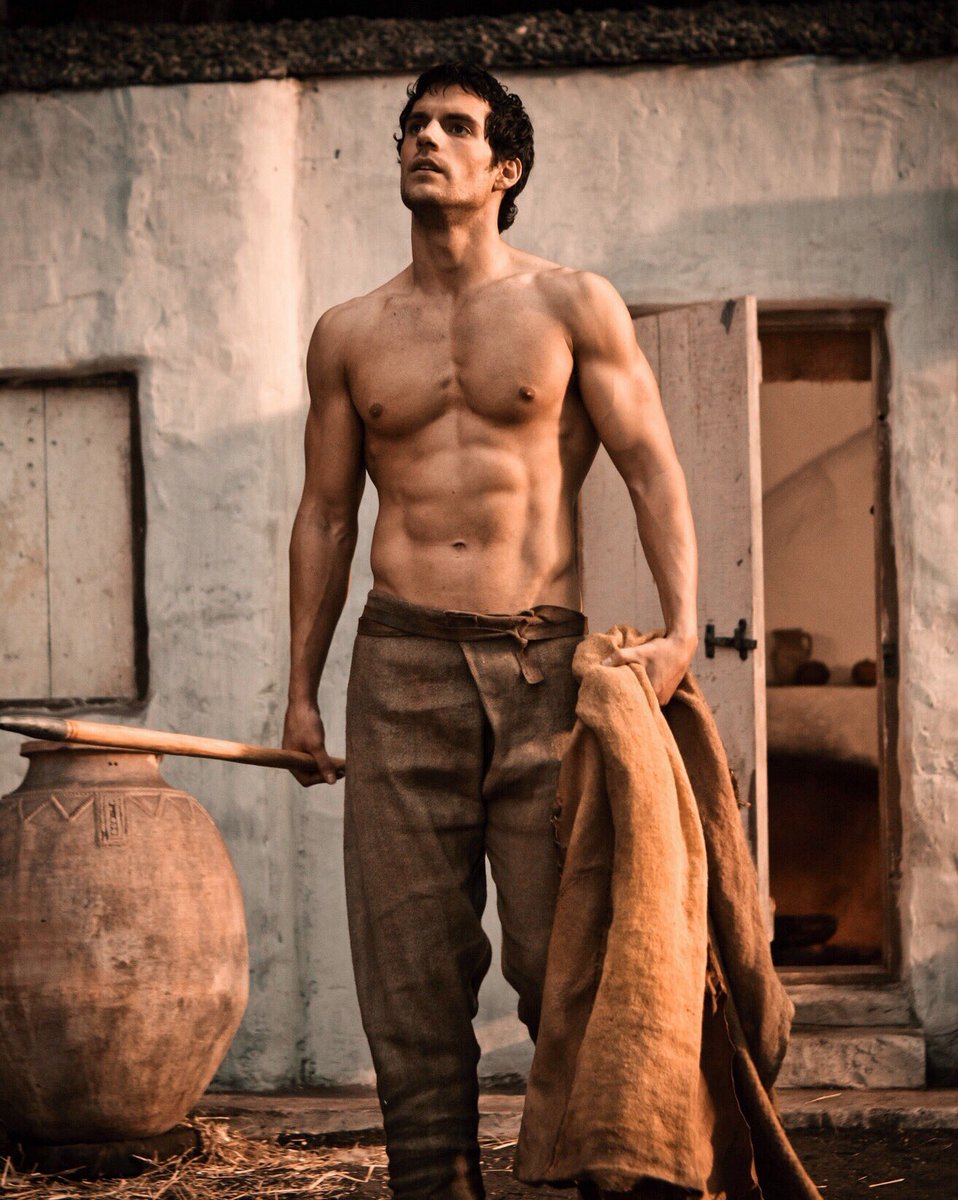 It's interesting that Charles and Vlas Parlapanides' screenplay never bothers to stop and tell the audience exactly who was whom.  After leaving the theater, I stayed on and eavesdropped on a few conversations.  Even among the people who enjoyed the visuals in Immortals, there was great confusion as to the characters.

One woman asked her husband, "Now, was that Athena or Aphrodite?"  Another group argued over whether Apollo was in there at all; apparently, he was: Corey Sevier is credited as such.

In this case, I will side with the audience: we hardly ever heard character's names being used, so trying to figure out exactly who was whom and attempting to sort out where they all fit into this was perplexing to say the least.

In the story, Theseus is the product of rape.  However, is it possible that the reason Zeus looks over him and trains him so is that Theseus himself is semi-divine?  While the temptation is there, the subject of Theseus' father is never addressed one way or another.  At the end of the battle at Mt. Tartarus, Theseus becomes a light that flies up to the heavens.  Why?  Again, this point never has an answer.

Another issue is with the sex scene between Theseus and Phaedra.  While seeing Freida Pinto's buttocks splashed on a giant screen is a sight to behold, perhaps even better in 3-D, the scene was remarkably perfunctory.  I can't call it a 'love scene' because there was never anything romantic communicated between Phaedra and Theseus.  In fact, given Pinto's dialogue, it looked like Phaedra got it on with Theseus because she didn't want her gift of prophesy, and the only way to get rid of it was to no longer be a True Virgin, a bit like Solitaire in Live and Let Die.

It's pretty obvious that a character constantly referred to as "the True Virgin Oracle" is not going to be a virgin when the credits roll. It reminds me of both Dragnet and The 40-Year-Old Virgin, both of which involved the virginal statuses of characters constantly referenced.  Of course, those were comedies, while Immortals is just an unintentional one.

Granted, both Pinto and Cavill are exceptionally beautiful people, and few would object to seeing them in various states of undress, but that scene just serves as exposure as opposed to exposition.  I figure that in a film like Immortals, Tarsem and Company are trying to get across a hybrid of gory, almost video game-like violence and homoerotic imagery with all those bare-chested men heaving about.

In a case of unintended consequences, knowing that Evans, playing the younger version of Hurt, was in Clash of the Titans as Apollo only makes things slightly more complex.

Moreover, in terms of actual performances, Tarsem doesn't give them anything to work with.  It's as if they are left to their own devices.  All the 'gods' really have nothing to do but strike poses as they talk about not interfering which they do anyway.  Kellan Lutz, a former model who has shown no range in the Twilight series, again shows off his body but no actual acting ability. I will give him some points for having to wear the silliest headpiece in Immortals: something that looks like he has a couple of buns baking on each side of his head.  I know Lutz is suppose to be Poseidon because he has a trident and controls the sea, but as for the other gods?  Well, are we suppose to care? 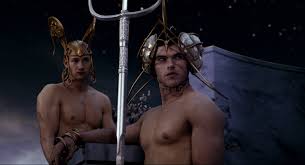 The mortals in Immortals don't fare better.  Pinto is blank throughout, and given how blank she was in Rise of Planet of the Apes I wonder if Slumdog Millionaire was a one-hit wonder.  I sense that Cavill did as much as he could with such a blank character as Theseus, who fluctuated between anger in the Leonidas mode and mere confusion.

Dorff is the only one who appears to understand the whole project is going to end up being cheesy and not to be taken seriously; as such, he's having a grand time and doesn't try to make such awful lines as "I am a thief, my lady.  If not for these chains, I'd steal your heart", sound like anything other than cringe-inducing over-the-top dialogue.  Rourke, on the other hand, might not have received the memo: his deep growl appears to show he's trying to play it straight but somehow still ending up on the wrong side of camp.

I'll go on to say that when I saw John Hurt in all this, all I could keep wondering was, "What's John Hurt doing in all this?"  Given, however, how he already embarrassed himself in Indiana Jones & The Kingdom of the Crystal Skull, the man who gave a shocking and brilliant performance as Caligula in I, Claudius doesn't seem to mind being in a piece of junk like Immortals.

Give Immortals credit in this respect: it knows what it's trying to be.  The outlandish costumes  by Eiko Ishioka  hows she's not afraid to go all-out in creating a totally fantastic and unapologetically unreal world (at least whenever an actor or actress is not showing off their physique).  Same for the production design, from the darkness of the Temple to the oddity of the tower/oasis in the middle of the desert and the Titan's cube-like prison.  Brendan Galvin's cinematography captured the unreal, highly exaggerated world of both the god's domain and the human world, with this chiaroscuro motif that was dominant throughout Immortals.

All of Immortals' flaws: the silly almost non-existent story, the questionable acting consisting of striking poses while saying odd or dumb things, the reliance on the physical beauty of the cast as opposed to creating any actual characters, could be forgiven. Immortals could have been a dumb, albeit enjoyable, good time if one didn't think while watching. It's entertaining if you just want to revel in the physical beauty of Cavill, Lutz, Pinto, and even Dorff.

If not for some odd suggestion of a sequel, I'd probably rate it higher.

On the whole, Immortals is junk, albeit at times beautiful looking junk, but junk nonetheless.  It should know it has no story, it has no reason for being, and it is highly disposable.  If it knew that, it should have been a bit lighter and not taken itself so seriously.  If if didn't know that, it has wildly overrated its worth as a film or even as dumb entertainment.

In short, this Immortals will not be beloved.