The Conspirator isn't about the actual plot to assassinate the President or the trial that followed for those accused of being involved in the massive plot to kill the top three leaders of the Union.  Rather, it is director Robert Redford's efforts at allegory, using the death of Lincoln and the immediate aftermath to make his commentary on post-9/11 America, and take a metaphorical shot at former Vice President Dick Cheney.  That's fine if he wishes to do that, but this is where The Conspirator goes wrong.  By trying to make an effort in showing how an 'evil', powerful man uses a major tragedy to commit crimes himself, it takes the focus off what is a fascinating story and reduces it to a thin and dull history lesson.

We start at the end of a particularly brutal Civil War battle circa 1863, given that the screen titles note the assassination takes place two years later: April 14, 1865.  Here, Major Frederick Aiken (James McAvoy) is desperately clinging to life, doing his best to keep his buddy Nicholas Baker (Justin Long) alive.  Now we go to the actual assassination date.  Aiken is courting Sarah Westin (Alexis Bledel) and is being mentored in the law by Maryland Senator Reverdy Johnson (Tom Wilkinson).

The actual assassination, along with the other plots to kill Vice President Andrew Johnson and Secretary of State William Seward, rush by us on screen, almost as if they have to be shown because they are vital to the plot but not important enough to take much time on them.  Instantly, Secretary of War Edwin Stanton (Kevin Kline) takes command.  He is convinced the conspirators are planning mass bombings, poisoning the waters and wants those responsible captured yesterday.  The actual capture of those involved moves amazingly quickly in The Conspirator, and now we arrive at the actual trial at the Old Penitentiary.

Aiken has no interest in defending Mary Surratt (Robin Wright), the only female listed as a conspirator in the Lincoln assassination, because he knows she's guilty.  However, he's persuaded by Senator Johnson to do so.  Mrs. Surratt is a remarkably calm woman who professes her innocence about being party to killing Lincoln though she tells Aiken that she knew of an earlier plot to kidnap the President and hold him hostage in exchange for Southern prisoners.  The trial is a military one, despite all the defendants being civilians and the war being over.  As the trial goes on, Aiken is angered and disgusted by how Stanton is turning the trial into a virtual kangaroo court: the defense is never given enough time to prepare, and the judges, all military men, act more as counsel to the prosecutor (Danny Huston) than as impartial judges.

The trial is placing its toll on Aiken's private life as well.  Society starts to shun him, and his fiancee worries that he cares more about Mrs. Surratt than about either her or the country.  The trial ends, with all eight defendants, including Mrs. Surratt, found guilty.  She, along with conspirators Lewis Payne (Norman Reedus), George Atzerodt (John Michael Weatherly), and David Harold (Marcus Hester) are sentenced to hang.  While Aiken does his best to get Mrs. Surratt spared hanging, Stanton won't rest until they are hung and hung good.  With that, she is the first woman executed by the United States government. 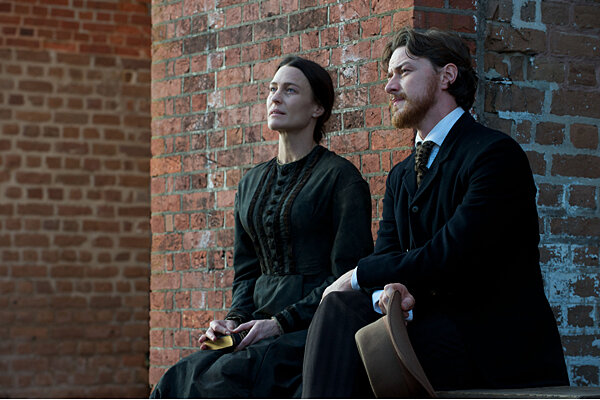 The Conspirator is the first film released by the American Film Company, whose lofty goal is to produce "engaging movies for grown-ups based on great American stories", historic stories I take it rather than American literature.  Certainly a noble goal, and one with a wealth of material.  There is a great story to be told first about the death of Lincoln and how Booth and his cohorts planned out their nefarious plan.  There is even a great story to be told about the trial of the plotters.

However, the big mistake The Conspirator makes is in trying to draw parallels between the assassination of Lincoln and September 11, 2001.  I imagine Redford didn't see a problem making comparisons between the Old Penitentiary and Guantanamo Bay. In terms of cinema, trying to relate something from the 19th Century to something from the 21st Century has the unfortunate effect of taking one out of the story being told on screen.

James Solomon's script from a story by Solomon and Gregory Bernstein, also makes another mistake.  It never allows us any real sense of suspense or even sympathy for the participants.  The Conspirator tries to be about both Frederick Aiken and Mary Surratt, but for long stretches of time we seem to forget that Aiken has a private life.  Normally, his personal situation wouldn't be important, but since the film introduces it early in the film, The Conspirator makes it important.  That being said, the jumps between his spirited defense of Mrs. Surratt and his banishment from his club because of it never seem to jell into one story.  Instead, they appear two stories placed in one film.

Judging from the film, Mrs. Surratt was nearly saintly in her innocence and bearing, and again, we have a problem.  The Conspirator may be based on actual court testimony, but the film almost takes it for granted that she was absolutely innocent.  Even after confessing to being an accessory before the fact in a plot to kidnap the President, the movie continues its efforts to make Mrs. Surratt a victim of the Dick Cheney stand-in Stanton's paranoia and thirst for revenge.  The film would have benefited by having the viewer question whether she was completely innocent or perhaps knew more than she let on.  By making her virtually virtuous, it can make one wonder whether all the defendants were likewise railroaded.

I digress to say that Dr. Samuel Mudd, one of the co-defendants in the military tribunal, is probably the one defendant who was caught up in the maelstrom of the assassination.  It may be that Mary Surratt was completely innocent, but to my knowledge, that has not been fully historically established.  The Conspirator makes the case that she was, mostly by questioning the reliability and truthfulness of witnesses such as her boarder Louis Weichman (Jonathan Groff) and tavern-keep John Lloyd (Stephen Root).  However, by taking it upon itself to make its position clear about her innocence and the evil that was Stanton, The Conspirator turned into a dull diatribe and dry history lesson rather than an exciting court drama.

The Conspirator also made another curious turn.  In the film, Aiken asks to see Captain Cottingham (Shea Whigham), who may have something to bring to her defense.  At the trial, the good captain becomes a hostile witness, bringing evidence against rather than for.  The fact that we don't see how or why Cottingham turned against Aiken makes one wonder why it was introduced in the first place.

Again and again, The Conspirator failed to build interest or fill in much information.  It took for granted that the audience would know what was going on, especially in the beginning.  If I hadn't read early on about the plot, I wouldn't have known it was Payne who had attacked Secretary of State Steward in his bed, or that an iron brace around the Secretary's jaw, placed after a carriage accident, was the only thing that saved his life.  We get thrown into the mass murder plot really quickly, with no manner of filling in details.  To my mind, this was one of the biggest blunders in The Conspirator because it didn't allow for any suspense to be built.

The performances come from an all-star cast.  That being the case, we did get solid performances. McAvoy continues to be one of the better actors of his generation, showing he can handle an American accent beautifully; Aiken becomes a man who changes his view of the judicial process as he becomes slowly angered by the antics of the tribunal but who until the end believes true justice will prevail.

I question the decision to have Wright be so quiet and gentle, again, almost saintly, throughout the film.  It does dehumanize her a bit in that she appears almost too above us.  Kline as the evil Chaney-like Stanton, is a villain not interested in justice but revenge (which I figure was the gist of the project).

Ultimately, one cannot know for certain whether Mrs. Surratt was innocent or not, but The Conspirator failed to make its case.