If you're going to make an 80s teen comedy, it helps to have three elements: an 80s setting, teens, and comedy. When all three elements are missing, you get Take Me Home Tonight, a film that appears to want to pay homage to 80s teen comedies but just becomes sad, even a touch confusing, to watch.

Matt (Topher Grace) has long for Tori Frederking (Teresa Palmer), whom he refers to as "The Frederking", since they did not make out in 10th grade back in 1982. Matt has pining away for The Frederking all these long years later.

After an uncertain amount of time later, the exact time frame is difficult to judge for reasons I'll get into later, Matt now is back at home, having graduated from MIT but working at Suncoast Videos.  As expected, Matt is depressed and lost, not knowing what to do with his life.

As it so happens, Tori is also back in Los Angeles and Matt fools her into thinking he works at Goldman Sachs and not as the video store clerk.  Tori invites him to a party that night held at  the home of a mutual high school classmate: Kyle (Chris Pratt).  Matt apparently was not invited to this party despite Kyle being the boyfriend of Matt's sister Wendy's (Amy Farris)

So now he goes, accompanied by his best friend Barry (Dan Fogler).  In this long night, Matt steals a car from the car lot he had been fired from that day, finds cocaine in said car, goes to two parties, finally bangs The Frederking, reveals the truth about himself which prompts Tori to dump him, she thinking he lied to her just to sleep with her, and decides to Ride The Ball (more on that later).

Wendy gets engaged to Kyle, finds she didn't get into Cambridge which Kyle calls Cam-Bridge, and turns down his proposal.  Finally, just as dawn is about to break, Matt decides he needs to take a risk thanks to the questionable advice of his father, Bill (Michael Biehn), by Riding the Ball.  In the end, all things end well. 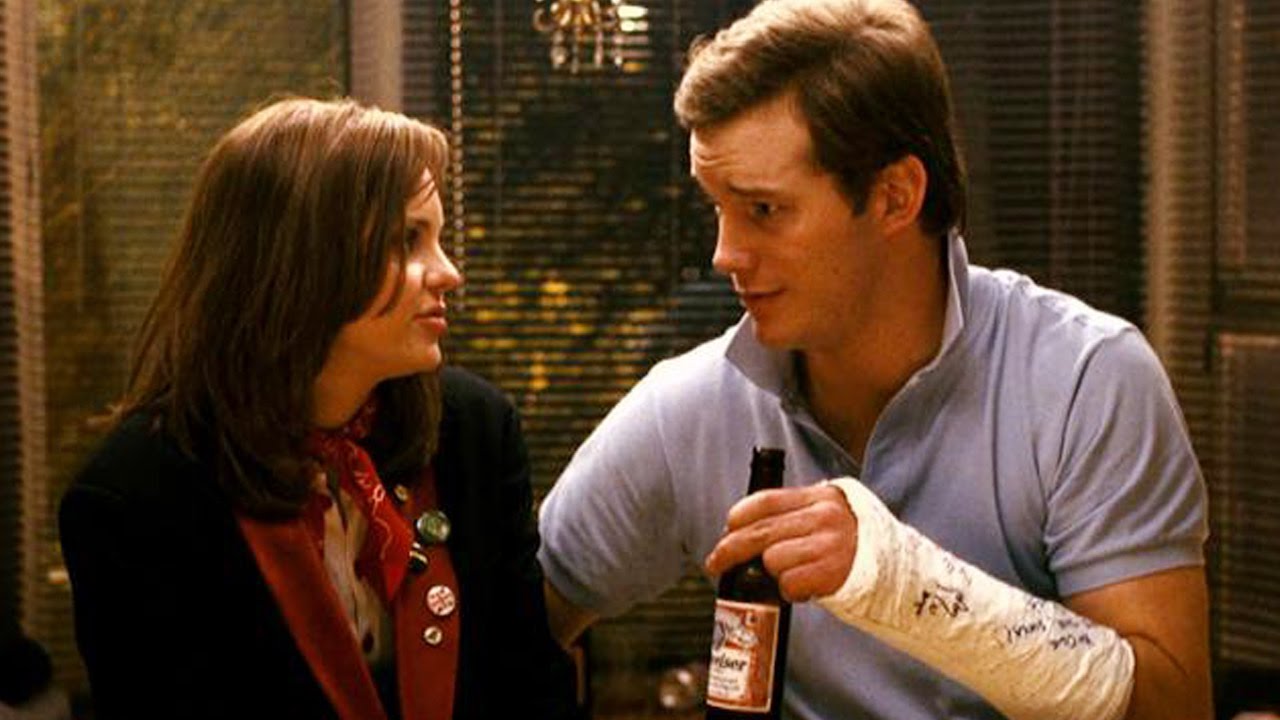 That really can't be said for Take Me Home Tonight.  You can't truly make an 80's teen comedy just by having your characters graduate in the mid-1980's.

Here is where I had a major problem: I could not gauge the time frame between when our characters graduated (1984) and the time our story takes place.  It's supposed to be a mere four years later, placing it in 1988; however, everything in Take Me Home Tonight suggests that it was actually closer to their ten year reunion, which would make more sense.

Part of it may be that the main cast looks like they are in their late twenties-early thirties (Grace is 32, Fogler and Faris 34, and Pratt 31, with only Palmer being of reasonable age for the film at 25).  When they look older than the characters they are suppose to be playing (Matt and Barry are suppose to be 22 but the actors look far older), you wouldn't be blamed into thinking Take Me Home Tonight is taking place further into the future.

To expand on that, if you think the story is taking place further into the century, say at the very least the 1990's,  if not the actual present-day, you wonder why everyone is behaving so immaturely.  Often I wondered why people in their mid-twenties if not thirties were behaving as though they were in high school.   For arguments sake, let's say I believed everyone in the film was 22 to 23.  It still doesn't make any sense: we're suppose to believe that all our characters have graduated college or at least moved on with their lives.  So, why are they still acting like teenagers?

Why are they so excited about Riding the Ball (a large metallic ball which is going to be rolled down a hill for their amusement)?  Why are they having a dance-off?  Seriously, a dance-off?  I watched this particular scene between Fogler and Tyler "Dance Machine" Jones (Robert Hoffman) with particular horror: not only was it a cliche in how it happened, but it only appeared to fill in time.

Having a series of 80's hits, from Duran Duran's Hungry Like The Wolf to Kim Carnes' Bette Davis Eyes, does not signal that the film is taking place in the 80's.  The music attempts to set the setting, but they really could be for nostalgia's sake.  Nothing really says "this is an 80's film", because often I kept thinking this was taking place either today or a decade after our characters graduated, which in either scenario places it closer to the early to mid-1990's.

At least now some things, like for example why many of the characters dressed as if they were on Miami Vice or wore their collars up, now make a bit more sense.  However, you can't a film make you guess when it is taking place.

There wasn't anything original about the performances either. Grace doesn't appear to be any different from Eric in That 70's Show.  He's suppose to be a confused individual, having graduated from MIT but floundering because he lacks direction.  Sadly, he comes off as more whiny than perplexed, someone who doesn't want to make a decision rather than someone who can't make a decision.

Fogler is a nightmare, being no different here than he was in the abysmal Good Luck Chuck: it was basically the same performance if not the same character.  There's an attempt to make Barry the comic relief, but he only comes off as immature if not downright dangerous to himself and others, and shockingly stupid for a man in his twenties.  Palmer was flat as the love interest, given that was her entire reason for being.

The story had that big problem of not being clear as to when it takes place.  Jackie and Jeff Filgo (basing their screenplay from a story by Gordon Kaywin and none other than Topher Grace) hit what are standard cliches in 80's films: a dance-off, wild parties, really weird sex, but also adds scenes that never build up to anything.  At the second party, you have Michael Ian Black as Tori's sleazy boss, but that story thread doesn't go anywhere because it's just an excuse to get them to another party and thus, to sleep together.  At the beginning of the film, when Barry is hitting on the video store clerk, and you see a stack of video stands, you are waiting for what you know will happen.

Director Michael Dowse did the best he could with the material he had, but he couldn't get us to care about these immature twenty-year-old children.

The characters all act like they are in high school but it's obvious they are in their 20's if not 30's, so it just looks so strange, and rather than being funny it looks sad.  At one point after the dance-off, Matt has Dance Machine and Barry stop their aggressive actions.  "No, we're ADULTS!", he shouts.  Could have fooled me.