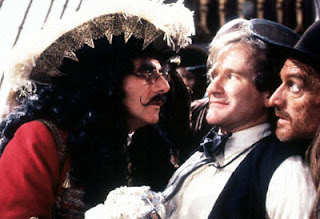 In between the animated and live-action version of Peter Pan, we got Hook, which can be called a semblance of a sequel to the J.M. Barrie story.  It was fully authorized by the Great Ormond Street Hospital, which owns the rights to the characters bequeathed by Sir James on his death.  One would think that Peter Pan would be right up Steven Spielberg's street, given that no man has captured the wonder and confusion of childhood better.  Well, you'd be wrong...by a long light-year mile.

We begin with a children's production of Peter Pan, and get the characters: there's sweet little Maggie (Amber Scott), on stage playing Wendy, there's Jack (Charlie Korsmo), the baseball-loving older brother, mother Moira (Caroline Goodall), and then there's Peter (think on that for a moment).  Peter Banning (Robin Williams) (emphasis mine), the father and husband, is all business (even taking a phone call during precious little Maggie's show.  Of course, as a powerful corporate lawyer, he will be apt to do things like miss little Jack's baseball game, going so far as to send someone from the office to videotape the game so he can go over it with Jack later.

In any case, it's off to London to visit Grammy Wendy (Dame Maggie Smith).  It's here we learn that the Peter Pan stories are true--up to a point.  Grammy Wendy is the same Wendy Darling who was the inspiration for Wendy Darling in Peter Pan.  As Grammy explains, her neighbor Mr. Barrie took the stories she would tell her brothers and put them down on paper.  Now, Grammy Wendy is going to be honored for all her work for children, in particular her aid in finding homes for orphans, such as one Peter Banning...

Peter is all business, no time for his children, his wife, or even Grammy Wendy, until both Jack and Maggie disappear.  It's then that Grammy Wendy tells Peter something he's completely forgotten: he is really Peter Pan.  Peter has grown up, fallen in love with Wendy's granddaughter Moira, and become a father.  We quickly see that none other than Captain Hook (Dustin Hoffman) has taken the children to enact revenge on Peter and have their final duel.  Tinker Bell (Julia Roberts) flies in from Never Land and takes a horrified and confused Peter back.

Quickly Peter comes across Hook aboard his ship, but because he's forgotten how to fly (and because Peter stubbornly refuses to believe any of what he sees or is told), Hook is almost displeased by this worthless adversary (not to mention Peter's inability to rescue his children).  Tink gets the bad Captain to give her three days to get Peter up to speed and thus give Hook his long-desired war.  It's off to the camp of the Lost Boys, where again Peter will not admit to himself he's in Never Land, that there are fairies, and that he is indeed Peter Pan.  The Lost Boys, now all punk and street urchin (and apparently American) are led by Rufio (Dante Basco), with punk hair and a bad attitude against this "adult".

Eventually, Peter Banning learns to use his imagination, understand how absent he's been from his children's lives, and most importantly, learns to fly again (even if Tinker Bell unrequited love for Petey will never be reciprocated).  Peter also remembers how he ended up fleeing from his mother in his pram (or baby carriage), found himself in Kensington Gardens and became the boy he once was.

However, Hook has decided to use the Charm Offensive on Jack, attempting to seduce him to think of him as a real father, even organizing a literal Pirates baseball game (Maggie, after singing a cute little song, isn't heard from until the end).  Peter organizes the Lost Boys, with Rufio ceding power to the real Peter Pan, and has one last battle with his nemesis.  In this epic battle, Rufio is killed, turning Jack against Hook and returning to his father.  Peter leaves, leaving Lost Boy Thud Butt (Raushand Hammond) as the new Leader of the Lost Boys.

Somewhere in Jim V. Hart and Malia Scotch Marmo's screenplay (with story by Hart and Nick Castle) there's a good idea battering around.  Unfortunately, they couldn't get it out because so much of Hook is remarkably cliched and predictable.   There's the father who cares more about business than family.  There's the baseball-loving son whose games are constantly missed by said father.  There's the cute little girl who soon falls by the wayside when there's nothing for her to do or add to the plot.  There's the stubborn refusal to believe what is right in front of you.

That last one is the one plot device I simply don't understand.  It's one thing to be surprised, amazed, shocked at what you are seeing: if I were taken to Never Land I certainly would be amazed and would not believe it...at first.  However, once I'd been there for a few hours, having seen fairies, the Lost Boys, and Captain Hook, I think I'd pretty much accept the premise rather than continue fighting it with fury as Peter Banning does.

Hook desperately wants us to think of it as whimsical but it never inspires us to think of it as whimsical or magical.  The primary reason is because everything about it looks fake.  Despite the Oscar nominations for Norman Garwood and Garrett Lewis for Art Direction, the sets looks exactly like what they were: sets, built and constructed to look amazingly unrealistic.  In particular, the Never Land scenes were so obviously film on massive sound stages that I never accepted this was a real place.  Even when Peter is rescued by mermaids, I thought they were in a large water tank in some studio.

There was no real sense of magic because everything in Hook was drowned by its own excess and naked calls for us to be caught up in a fantasy world that simply didn't look fantastical in the first place.

Even worse in the aspect of the story, I am shocked that Spielberg thought it was a good idea for Tinker Bell to speak!  A blasphemy, I say, and a big break from tradition.  Barring the silent version (where no one speaks), Tink has always maintained a strict silence, and so hearing Tinker Bell speak (and worse, speak with a distinctly American voice) only made matters worse.

Before anyone gets after me for commenting on how odd hearing Tinker Bell speak as if she were from Tacoma, Washington, pointing out that fairies don't have nationalities, I should point out that as such, their voices shouldn't sound so particularly American, or British.  If hearing a fairy speak like an American doesn't give you that much consternation, then why not hire Dame Edna to voice Tinker Bell in another production?  If Roberts can do it, why can't Australian Dame Edna?

The technicality of Tink's nationality could (with some difficulty) be overlooked.  What I can't get my head around is that the Lost Boys are both American and in some cases, teenagers.  It's clear that in Hook, Spielberg went for a large Yankee cast to portray the kids, which makes no sense if the Lost Boys do come from boys having fallen out of their prams while their nannies weren't looking.  How did these California boys end up in Kensington Gardens, I wonder.

Even if we suspended disbelief to make the Lost Boys clearly American, how do you explain that these boys are almost men when we see them?  In particular, Basco's Rufio (which kept bringing to mind Martin Landau in Cleopatra) appeared far too old to believable play a 'boy' no matter how generous the term.  On top of all that, you had this late-80s early-90s vibe of making Rufio in particular but the Lost Boys in general almost punk rockers-like.  One imagines that if Hook had been made in the mid-to-late 90s, the Lost Boys would have been emo kids.  This sadly has the effect of dating the film, rather than give it that timeless quality other Peter Pan adaptations have.

The performances have a lot to answer for.  Williams in particular appears unbalanced, for when he finally discovers he IS Peter Pan (and acquires a new outfit from apparently the clouds he was flying over), he appears to have turned idiot, reverting to an almost child-like delivery of his lines and totally forgetting he has any children to speak of.  Most of the movie he refuses to even believe he is in Never Land, let alone that he is Peter Pan, but almost just as quickly, he knows he is.  It's extraordinary that despite the nearly two-and-a-half hour running time, Hook is so rushed to get from Point A to Point B that we don't ever take the time to do any real training or to show how Hook is seducing Jack to the dark side.  ma

The other actors don't do any better.  Well, in fairness Hoffman appears to be delighting in making Captain Hook a more comic creation, closer to the animated version than to something like Jason Isaacs' turn in the future live-action Peter Pan.  Roberts was amazingly blank and uninspiring as Tinker Bell.  As one looks at the performances: from Korsmo's Jack to Goddall's Moira to all the Lost Boys (virtually indistinguishable from each other), it boggles the mind that Steven Spielberg, one of the great directors, simply could not get good performances out of a range of good actors.

In fact, it appeared that nothing in Hook was going well.  It is amazing just how often things in Hook misfired; the sets looked fake, the acting was weak, even more horrifying, somehow John Williams' score was hit-and-miss.  The music pre-London sounded like something from a 1970s B-Picture (if forced to compare, the music from Theater of Blood comes to mind, sir), and I wouldn't say that perhaps that was the intention.  However, nothing in Hook was magical, or exciting, or even logical.  I wondered why, if Grammy Wendy was THE Wendy Darling, she never married (given she kept the Darling last name) or how her younger brothers John and Michael had not lived.  When your mind starts wandering to imagine the lives of characters not in the film, said film has problems.

I will throw in that the various cameos (of which there were many but I only found two: Phil Collins as a detective and David Crosby as a pirate...and the second one I was never sure of until reading the credits) were a bit of a distraction.  Add to that, in the climatic sword-fight between Hook and Pan, it's obvious Hoffman was not doing the fighting (although I was impressed at how whoever his double was cleverly hiding that by putting the hook across his face so as to hide it).

So many things wrong with Hook.  The story failed Spielberg.  Spielberg failed the story.  Perhaps this is a case where the director most like Peter Pan was simply too close to the subject to tell a Peter Pan story.

Glad I'm not the only one who saw the similarity...