The Son of No One: A Review 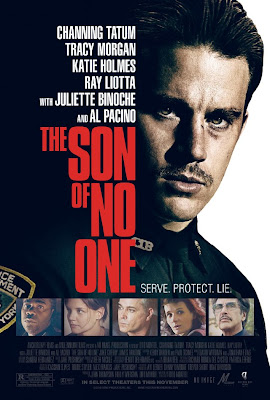 THE SON OF NO ONE

Some men just shouldn't have mustaches.  Channing Tatum is one of them.

With The Son of No One, I have to reluctantly give Tatum credit for at least attempting a more sober, serious drama than what is usual Tatum fare (either a romance, a military role, or a combination).  I figure the mustache was an effort to add to a more serious stab at being a deeper, richer dramatic actor.

If only The Son of No One wasn't so inept.

The story by writer/director Dito Montiel jumps between 1986 and 2002.  In 1986 we have Jonathan White (Jake Cherry), nicknamed Milk (I figure because he's apparently the only white boy in the Queensboro Projects).  Although he's the son of a cop, he's surrounded by violence and drugs, living with his grandmother after his dad is killed in the line of duty.

In one awful night, Milk is forced to kill a junkie who stormed into his apartment.  He and his best friend Vinny (Brian Gilbert) hide the body, but someone knows what they did.  Although he can't prove it, Detective Stanford (Al Pacino) suspects Milk committed the crime.

As it happens, Milk and Vinny plan to run away, but the secret witness threatens Milk, demanding money for silence.  Again, accidentally, Milk kills this guy, and again, he and Vinny hide the body, and again, Stanford suspects.  This time, he has the gun from the first crime but opts to keep this a cold case.  Vinny, unfortunately, has mental issues, and is sent back to a mental hospital.

Our 2002 story has now-Officer White (Tatum) temporarily transferred back to the old neighborhood.  His wife Kerry (Katie Holmes) isn't happy about him working in Queens rather than home at Staten Island. He is doing his best with his new partner Prudenti (James Ransone) and Captain Mathers (Ray Liotta).  Unfortunately, Loren Bridges (Juliette Binoche) a local newspaper reporter, has been getting letters about two unsolved murders from 1986.  The letters get more threatening, promising to reveal the identity of the killer.

White is becoming unnerved that his secret from long ago will be exposed, but he sees that Vinny (Tracy Morgan) is still a bit unstable.  Soon White's family is threatened, Bridges is gunned down, and we see that his transfer was to see if either he or Vinny were writing these letters, which named Stanford as the killer.  Mathers happens to be not only Stanford's probable successor but his godson and Prudenti a relative.

In a 'big' twist, White comes to Vinny's rescue (since the trio were going to kill him and end the case), though he couldn't in the climatic shootout.  Eventually, we find who actually wrote the letters: it is Vicky (Decorte Snipes), Vinny's sister and Milk's friend who like Vinny still lives in the old neighborhood.  She wanted justice for her brother, but now releases Milk to live his life.

If you think that having a character who is barely there in the 1986 storyline ends up being the culprit is a cheat, I imagine that you would not like The Son of No One.  It also shows the chief problem in the film: it makes no sense on many levels.

If Bridges is such a bright reporter, why didn't she make the connection between Stanford investigating these long-ago crimes and the fact that White was the son of his former partner?  Also, if she's so bright wouldn't you think she would have some kind of protection?  Exactly how does Stanford come to the conclusion that Milk (and Vinny) come to pin the crimes of people they ostensibly have never met on either of them?

The letters were written in a threatening manner, so how could anyone imagine that someone as mentally damaged as Vinny could write letters that sound as if they were written by a sound mind?  Further, how does Vicky know about the second death when she wasn't there (unless Vinny in his mentally confused state told her).  Add to that the idea that pinning the crimes on Stanford (which she knew he didn't actually commit) would help her brother in any way is ridiculous.

If White is the one writing the letters (which Mathers, Stanford, and Prudenti think), why would he write about something that would implicate himself in?  Furthermore, if there is still doubt about him being the author, why try to kill him without knowing for sure?

It's as if no one thought any of this through.  Even on small things we see the story coming apart all over the place.  In 1986, the guy who finds out about the first killing threatens to tell the cops unless the dead junkie's debt is paid by the kids.  To prove he's serious, this guy (and no, I didn't catch his name) is waving around the murder weapon.  All I could think of was, 'the police won't believe you because the gun has YOUR fingerprints all over it'.  It's just one bungle after after, until the story becomes too disjointed and silly to believe.

It doesn't even try at times, it doesn't even try to make things mysterious.  The voice that threatens Kerry is so obviously Liotta's that it almost makes one wonder if we're suppose to know long before the characters.

We also have a gathering of some lousy acting.  I never saw Dawson's Creek, and I don't think I've ever seen a Katie Holmes film apart from Batman Begins, but I have to think she's a better actress than she is in The Son of No One.  She has one expression throughout, whether she's being threatened or suspecting Jonathan of having an affair.  It's as if she decided to match Channing Tatum in terms of acting style.

Tatum is still amazingly emotionless, a man who just cannot express anything on screen.  His continued career is still a great puzzlement to me.  It's a good thing that he is venturing to what appears to be more serious fare, but he can't pull it off.  There's never an ability to change his face, and on screen he's always so stiff.

I give credit to Morgan for trying to portray a mentally battered man, even if given some of his public behavior, playing a mentally questionable man might not be the best choice, and he did a surprisingly good job.  Binoche played her part as though she frankly was too smart to believe any of this.

It's unfortunate that Liotta was reduced to doing nothing but being permanently angry, given that he's a better actor than he's been given credit for.  Ransone has a more interesting character as the bigoted, angry Prudenti, but the twist of him being in league with Mathers and Stanford just seems silly.

However, it's not as silly as Al Pacino, who is just coasting in The Son of No One.  Given Pacino has given some simply great performances, here he doesn't bother to show up.

Truth be told, the best performances are from Cherry and Gilbert.  I would have preferred to have seen their whole story rather than jump back and forth between them and 2002.  I think if the film had devoted more time to how the situations got to the killings, what they did to get away from it, and how it affected them at the time, with maybe a minor part of the film in the present day.  Also, I think the jumping back and forth, while not confusing, proved a bit aggravating.

The Son of No One never worked because some of the people involved tried to be too artsy with the material and some weren't trying at all to make it work.  It's a story that jumps around figuratively and literally and just falls apart.

When we see exactly who unleashed all this chaos, it really is a cop-out.