From Russia With Love: A Review FROM RUSSIA WITH LOVE

From Russia With Love doesn't, unlike other sequels, pick up right after its predecessor (Dr. No), but we do have threads of our first encounter with Bond that tie in well.   However, one of the benefits of From Russia With Love is that we can see it without having to have seen Dr. No.  The film itself ups the ante on the franchise to have one of the best of the Bond films altogether.

Tragically, From Russia With Love  was also the final film that James Bond creator Ian Fleming saw before his own death in 1964.

SPECTRE, the nefarious super-criminal organization last seen in Dr. No, now has a new scheme: to steal a valuable code-breaking machine called Lektor from the Soviets.   In order to get a Lektor, SPECTER decides to play both sides against the middle: they will come up with a story so patently ridiculous that both the KGB and MI6 will think they are outsmarting each other when they are really unwitting puppets for SPECTRE. The Russians will think the British are stealing the Lektor while the British will think the scheme is a Russian plot to entrap them.

The scheme is simplicity itself: the British will be told that a woman working at the Soviet Consulate in Istanbul has fallen in love with a photograph of one of their agents, James Bond (Sean Connery) and is not only willing to defect but to turn over the Lektor.  Meanwhile, the Soviet secretary Tatiana Romanova (Daniela Biachi), thinks she is on a special assignment from the Soviet High Command, with Colonel Klebb (Lotte Lenya) as the head of this secret mission.

While the British are highly suspicious, the opportunity to get their hands on a Lektor is too tempting to pass up (just as SPECTRE thought).

Bond arrives in Istanbul, meeting up with the Turkish ally Kerim Bey (Pedro Armendariz).  Soon the rather tranquil truce between the West and East is shattered by a series of killings and attempted assassinations.  Both sides suspect the other, unaware this is further misdirection by SPECTRE.  Watching and waiting for his chance is Grant (Robert Shaw), a lethal assassin trained for one thing: to kill Bond and get the Lektor to SPECTRE (no rhyme intended).

Bond and Tania become enchanted with each other, and make an escape from Turkey to Venice, with Grant quietly following.  While Bond appears to be triumphant, Colonel Klebb makes one last literal stab to get the Lektor and dispatch of Bond once and for all. 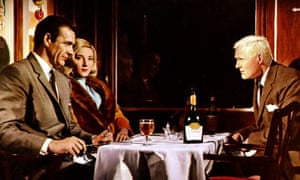 From Russia With Love is a high step-up from Dr. No in that the script by Richard Maibaum (adapted by Johanna Harwood) always put us ahead of the characters.  We know information that they don't, and as such, it becomes an anticipation game to the big payoff.  Right from the start we know the danger Grant poses for Bond at the film's opening scene and throughout the film are kept waiting for their eventual confrontation.

Director Terence Young holds our attention by giving us both sides: both the machinations of SPECTRE along with the plots of MI6.  With all this foreknowledge, the audience is one step ahead and thus we can wait in anticipation of when something will come.

It also improves on having a whole retinue of actors in From Russia With Love.  The casting of Shaw as the nearly-silent henchman is brilliant.  It isn't until near the end of the film that we hear his voice, so he has to project this intimidation by his body and eye movement.  In his quiet demeanor we can see the menace and danger Grant will pose, never getting excited but having a cool and methodical manner to his murderous ways.

Likewise, Lenya does a brilliant job as Colonel Klebb.  She is all business in her ruthlessness and single-mindedness in completing the mission, with the Russian accent and mannish attire adds to her menace.

In one of those curious turns, the scene where Klebb is giving Tatia her assignment, there is a weird subtext of semi-repressed lesbianism in Klebb: the way she uses a whip, the way she 'accidentally' puts her hand on Tania's knee, orders her to take her jacket off, questions Tania about her sexual past, and caresses her shoulders.  Somehow, even today, the subtlety is rather daring in its suggestions.

Balancing the dangers from SPECTRE's agents, we have Armendariz, also brilliant as the bon vivant Kerim Bey.  He enjoys his life as a master spy, running the T Branch as almost a Pasha with his obvious delight in the company of beautiful women and having a series of sons working as his closest aides (blood, he says, is the best insurance in this type of business); it is almost beyond belief that he was dying during filming.  Armendariz was diagnosed with inoperable cancer while in Istanbul, and his scenes were rushed ahead to allow him to finish.

He brings a jolly delight to Kerim, and when he does meet his end, it actually is sad given what pleasure he showed when involved in the espionage game.  Still, he could play serious too: he demands to take revenge on the man who tried to kill him in the Gypsy camp Bey took Bond to when giving the enemy the run-around. Bianchi is a beautiful woman as Tania, but given that Barbara Jefford had to dub in her voice (I'm guessing her Italian accent too noticeable to pass as Russian), she was there for her beauty and little else.  She wasn't a motivating force in From Russia With Love, but she did a good job as the duped Russian given she had little to no acting experience.

Connery's Bond can be a bit of a jerk (at one point slapping Tania hard believing she had a hand in the killing of Bey) and a bit of a slut (hard to justify sleeping with a woman he'd just met), but he could also play Bond as a charming man and a ruthless and efficient man too.  Connery created a full character: one who can be smooth and shadowy, a lover and a fighter, one who delighted in beauty but was methodical as a killer.  It's almost as if he and Grant could be opposites of the same coin except Bond doesn't take pleasure in killing, merely seeing it as part of the job.

On the technical side, we can see the bigger budget From Russia With Love had over Dr. No.  The sets are more lavish, the locations more exotic beautifully captured by Ted Moore's cinematography and John Barry's music more exciting.

Its only major flaw is the lack of a theme song. While From Russia With Love doesn't have a theme song in the opening, the title song performed by Matt Monro is a lovely ballad.

From Russia With Love is an excellent spy thriller, filled with danger thanks to Colonel Klebb and Grant, adventure thanks to some thrilling fight sequences such as one in a Gypsy camp, and romance.  It is a rare film that to my mind, it is a sequel that is better than the original.  It never devolves into camp, it never winks to the audience that it's all done tongue in cheek, but takes the plot seriously.

The acting is overall excellent, the story moves fast and nearly fifty years later does not feel dated.

After someone watches From Russia With Love, they will never be able to say nyet to James Bond.