The Descendants: A Review 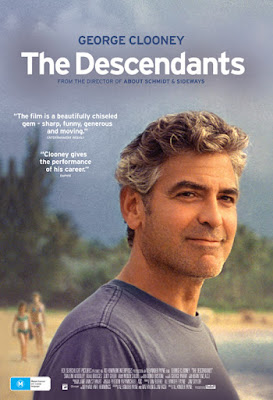 The Descendants, based on the novel by Kaui Hart Hemmings, isn't a comedy nor is it a drama.  It is a film that appears to think it's a bit more clever and insightful than it really is.  It isn't a bad film, but it it isn't as good a film as it is being presented as.

Matt King (George Clooney) is a lawyer and land baron in our fiftieth state, a descendant of native Hawaiian royalty (hence the title).  He is facing the sale of the last unspoiled land in all of Hawaii, which will enrich his various cousins and himself.  However, there is a personal matter that soon overwhelms him.

His wife, Elizabeth (Patricia Hastie) has had a boating accident and is lying in a coma.  While Matt is the first to admit their marriage was not perfect, he is devastated by her injury and by the fact that she is basically dead.  He now has to face the unenviable task of getting his two daughters ready for their mother's impending death.  Their younger daughter, Scottie (Amara Miller) is at home, but the older, teenage Alexandra (Shailene Woodley) is away at boarding school, where she is majoring is drunkenness, foul language, and general whining.  Matt drags her back home, where he learns a big surprise.

Elizabeth had been having an affair just before her boating accident.

The now-cuckold Matt literally runs down the streets of Honolulu to find out who his wife's lover was, something that apparently all their friends knew and apparently condoned.  With Alexandra's help, Matt will find his wife's lover.   However, Matt has to take Alexandra's 'friend' Sid (Nick Krause) with them.  Matt also has to deal with his disapproving father-in-law Scott (Robert Forster) and his slowly senile mother-in-law Tutu (Barbara Southern).

Eventually, we find the other man, one Brian Speer (Matthew Lillard).  Brian is a realtor, and Matt finds out that Brian is involved in the land deal, and his involvement appears to be coincidental.  The reason Matt tracks Brian down is not, as one might think, to at the least tell him off and at the most clock him, but instead is to give Brian a chance to say good-bye.

Not surprisingly, Brian opts not to, but surprisingly, Brian's wife Julie (Judy Greer) does come to Honolulu to offer forgiveness to a comatose Elizabeth.  In the end, Matt decides not to sell the property, upsetting the myriad of cousins, and now he, Alexandra, and Scottie begin to form their family postmortem. 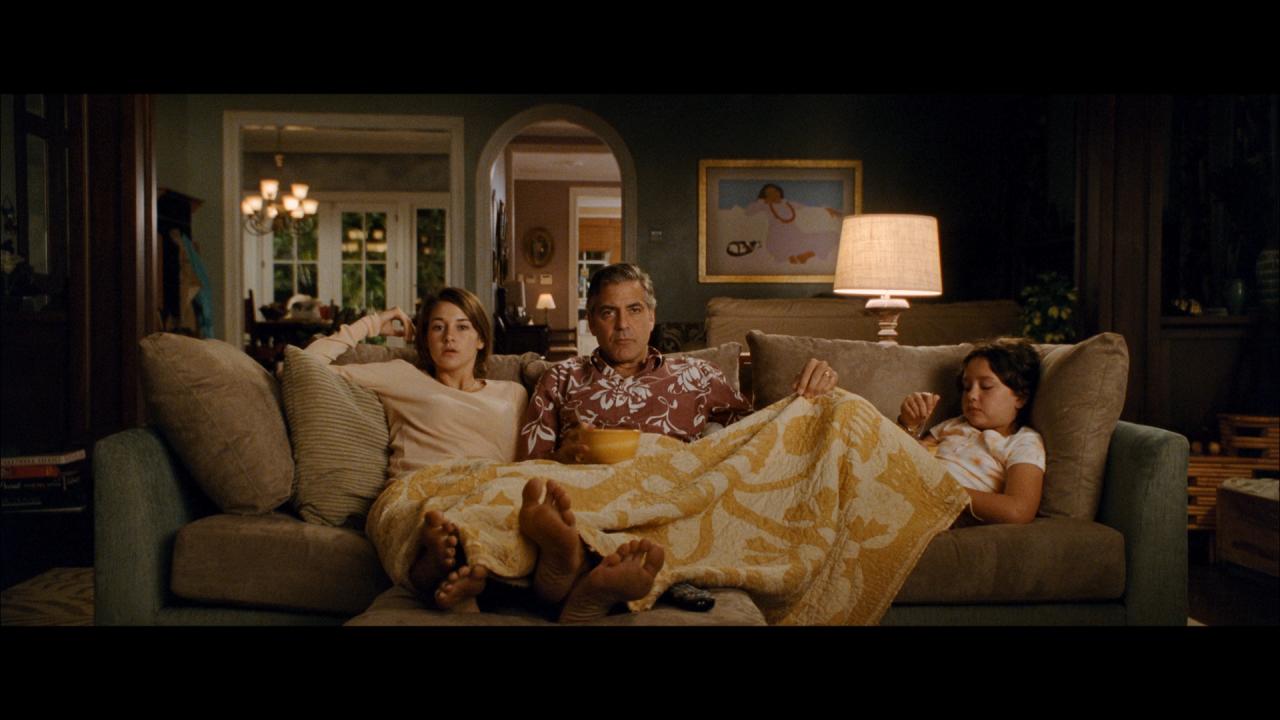 While The Descendants appears to have charmed many with its combination of comedy and searing drama, I found it a bit smug in its efforts to be insightful.  I think this comes from certain scenes and characters in the film.

For example, I never found Sid to be funny although he appears to be there for some form of comic relief.  The comedy may have come in his clueless nature; for example, when Tutu mistakes going to Queen Elizabeth Hospital for thinking she is going to meet Queen Elizabeth, Sid starts laughing openly, much to everyone's horror, even Alexandra who has defended him at every turn.  Sid  then appears genuinely shocked that Tutu's husband would have punched him.

One would think that Tutu's obvious mental deterioration is not a place where laughs would come from, but there it is.

Also, in regards to Alexandra, she says the reason she and her mother fought before her accident was because she had caught Elizabeth cheating.  This discovery would be of course naturally upsetting to anyone: I think Natalie faced a similar situation on an episode of The Facts of Life.

The reason she gives as to being particularly upset about her mother's liaison is because of what Elizabeth is doing to her father.  This reason is strange however given Alexandra's equally hostile manner towards Matt.  She doesn't appear to care about him, so one would have thought in her anger she would almost have enjoyed telling him about Elizabeth's unfaithfulness.

Some of the comedy appeared forced, such as how blasé Elizabeth's friends Kai (Mary Birdsong) and Mark (Rob Huebel) are about the whole thing.  Their attitude appears to be, she was having an affair, we knew about it, but there were reasons for that.  They don't appear bothered that Matt has been made a fool.  I guess from a certain point of view, perhaps in a sitcom, this would all appear hilarious.  However, I wasn't laughing. 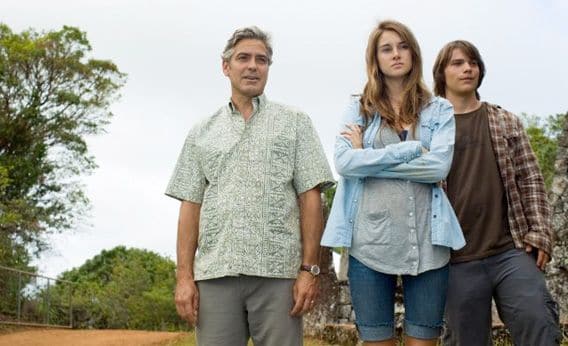 In retrospect, I don't remember laughing at The Descendants, even though it is billed as having comedy elements in it.  For me, there were other aspects in the adaptation by director Alexander Payne (along with Nat Faxon and Jim Rash) that was going for something and didn't quite get there.

In particular, there is a scene with another girl named Reina (Ceila Kenney) which is basically pointless.  Reina is brought into Elizabeth's room by Scottie to 'prove' her mother is there.  I never understood what the point of that particular moment was, which I thought could easily be cut without affecting the story.

The big thing in The Descendants is the fact that Clooney plays against type.  Somehow, it's nice to see the current model of a smooth ladies man be such a pathetic wimp, and Clooney does a good job playing a wimp who basically can't stand up to the man who was sleeping with his wife.  One is also genuinely surprised that Lillard could turn out a good dramatic performance in a very small role given how he's built a whole career of playing goofballs and Shaggy.

As a side note, if a woman had the choice between Matthew Lillard and George Clooney, would it actually be a contest?

Woodley did a good job of playing the whiny lush of a brat of a girl, but credit should be given to both her and Payne in that her evolution to someone who begins to see her father as more complex than she first thought came through.  As I've stated, I didn't think Krause was funny and didn't care for either him or his character.

In a smaller role, Greer has a beautiful moment where she goes to Elizabeth's bedside.  Out of all the characters who've talked about Elizabeth, who've insulted her when she is in no position to defend herself, Julie is the only one to offer any forgiveness to her.

These moments, where one might be tempted to dismiss Elizabeth as a terrible person but we are reminded that humans have a capacity for mercy as well as anger, are what elevates The Descendants above the comedy it thinks it has.  We get this again, when Tutu and Ben come to say good-bye to Elizabeth herself.  Rather than reveal Elizabeth's actions, Matt allows Ben to continue thinking his daughter was a good and faithful wife.  Perhaps that's a little predictable and pat, but The Descendants doesn't appear to want to go for a truly bad ending.

One thing that I didn't care for was the opening voiceover.  In The Descendants, we start with Matt's voiceover and it lingers for a while, but once we get Clooney running down the backstreets of Hawaii, the voiceover is dropped for a straight narrative.

The Descendants isn't a bad movie.  However, I don't think it is as good as people have made it out to be.  It isn't particularly funny, and a couple of times a bit mean-spirited; it's hard for me to sympathize or empathize with a wimp like Matt King.  However, it has its moments of complex human emotions that do lift it up.

In the end, The Descendants reminded me of a story I once read about Queen Alexandra, consort to King Edward VII.  The story goes that when Her Majesty realized the King was dying, she sent the royal car to collect Alice Keppel, the King's favorite mistress, to allow her to say good-bye.