Hell And Back Again: A Review 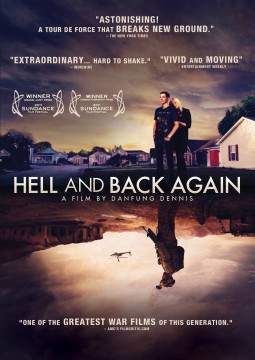 HELL AND BACK AGAIN

War has always brought psychological injuries that can go along with any physical injuries acquired in the field.  Hell and Back Again allows us into the lives of a combat veteran and his spouse, attempting to put their lives into a semblance of what it was before war interrupted their lives.

Director Danfung Dennis follows Sergeant Nathan Harris of Echo Company Second Platoon both in war and peace.  We're told that shortly before he is to return to America he was hit and was seriously wounded.  Once home, Sgt. Harris and his wife Ashley go through their lives as well as they can: their lives revolving around medical appointments and medication fro Sgt. Harris.  He, however, not only has the physical injuries (he is unable to walk without assistance of some kind), but  also mental health issues.

In between seeing how Sgt. and Mrs. Harris try to deal with his injuries, Hell and Back Again intercut scenes of his time in Afghanistan, both in the midst of the fighting and of him and his troops dealing with the Afghan people.  The battle scenes appear to be a mirror to Harris' internal and external struggles to put his life together the best way he can. 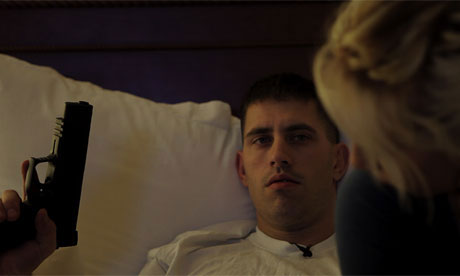 At times, one becomes alarmed with Sgt. Harris' behavior.  He appears to love his guns way too much: at one point pointing it towards himself, another when he makes a show of being quick on the draw.

However, seeing the physical agony he is undergoing as well as how his injuries are keeping him from returning to the front, give us a sense of frustration at the powerlessness of it all.

We also get a sense of hope with the Harris family.  At one point in Hell and Back Again we hear him in voiceover talking about how when he first joined at 18, he basically did it to 'kill people'.  Now, after having gone through the scourge of war, seeing it up-close, and living to tell the tale, he has at 26 reached a more mature view on war.

It isn't just about killing, it isn't a live-action version of a video game which in the film he continues to enjoy playing, but it is about leaving something better behind.

We see this when we see him and the other troops in Afghanistan.  The soldiers appear to be genuinely interested in making life better for the Afghan civilian population; at one point, Harris himself reflects on how we went into Afghanistan to do good, and the troops also are shown to be doing their duty and being professional about it.

There is also a scene where we go to a memorial service for those in the company who have fallen.  The chaplain himself becomes highly emotional, and it is hard not to react emotionally at seeing how the military honors those who have, in the words of President Lincoln, given the last full measure of devotion.

To the bagpipes rendition of Amazing Grace, to see the photos of so many young men, is a moving and heartbreaking scene.  It has us contemplate just how many lives, in their early stages, have been lost to the inhumanity, cruelty, and compulsion to the darker forces of man's nature. 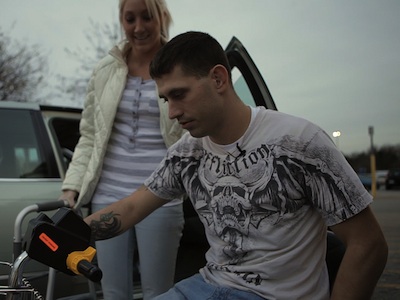 One scene in Hell and Back Again sets things so well.  Sgt. Harris, in his motorized cart, enters a Wal-Mart where we meet the traditional greeter.  She is a senior citizen, who is also incapacitated and in a motorized vehicle herself.

Here we see two people who need machines to help them move around: one due to war, one due to age.  While Dennis doesn't focus on the curious imagery of a young man and an old woman in similar circumstances, we can't help think on how life can grant out different ends to people.

The war footage is shot so well it really comes as close to a 'you-are-there' style as those of us who will probably never see war ourselves will come.  Dennis also manages to never shortchange the war footage with that of the homefront, nor does it appear to be gratuitous or distracting.  Both his struggles to stay alive in Afghanistan and in the United States are blended remarkably well.

A minor flaw is that we really don't see much or hear much from Ashley Harris.  Those who live with veterans have their own burdens, and while the focus is understandably on Sgt. Harris, one thinks that Mrs. Harris' views or her own difficulties of being in this situation could have been given more time.

Another time, one of the doctors was audibly difficult to understand.  Whether he sounded as if he were speaking underwater because of Dennis' overall vision for Hell and Back Again or a technical issue I cannot say, but I found that a minor distraction.

Hell and Back Again doesn't touch on the rightness or wrongness of the military campaigns.  This is a good thing, because the focus should be on those who fought there, who died there, and who came back from there.  The position of the viewer is irrelevant so far as that Hell and Back Again is neither a pro or anti-war documentary.

Instead, Hell and Back Again is about those who will be in one way or another fighting long after the fighting is relegated to the history books.  It is about the men and women who lived it and lived through it, and the women and men they came back to.