Doctor Who Story 007: The Sensorites 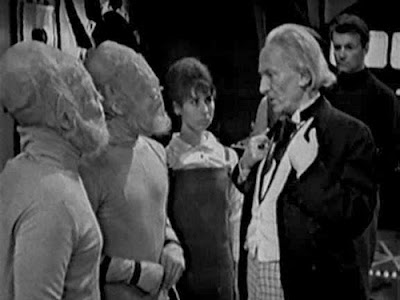 I had heard of The Sensorites, but this Doctor Who story, if I understand things, is one that is not very popular.  After watching the six-part The Sensorites, I don't understand why it isn't as well-known or liked by Whovians.  Despite its length The Sensorites moves fast, has an interesting story, and has better aliens.  Granted, it has some issues (oddly, or perhaps Oodly, that we will see later), but The Sensorites should rank higher in Who circles.

Picking up from The Aztecs, the Travellers: the Doctor (William Hartnell), his granddaughter Susan (Carol Ann Ford), and her teachers, Barbara Wright (Jacqueline Hill), and Ian Chesterton (William Russell) find that the TARDIS is travelling inside a spaceship.  They find a crew whom they at first think are dead.  Instead, they are under deep hypnosis.  The three crewmembers, Maitland (Lorne Cossette), Carol (Ilona Rodgers), and her fiancee John (Steven Dartnell) are in a curious position.  They are being held hostage by the residents of the planet they are orbiting but are being sent food by the same.  In short, they are not being killed by not being allowed to leave.  John is the most affected crewman: his mind is almost totally controlled by the strange beings holding them.

Eventually, the aliens from the Sense-Sphere come to meet the new visitors.  They are the Sensorites, and we find that they are not true villains.  Instead, they are afraid of the humans.  The last time the Sensorites and humans met, there came a plague that is killing the Sensorites off.  The previous ship had five humans, but it exploded before departing.  Now fearful that this second ship will increase the plague, the Sensorites are holding the humans hostage.

Susan, who can communicate with them telepathically, convinces them that no harm is meant towards them.  The Doctor, in fact, can help find what is causing the Sensorite plague and perhaps a cure.  Leaving Maitland and Barbara aboard the spacecraft, the Doctor, Susan, and Ian travel to the Sense-Sphere.  There, we find evil afoot.  The Sensorite Leader, the First Elder (Eric Francis), welcomes them, but the City Administrator (Peter Glaze), who is third in command, is convinced the humans will bring more destruction.  The Doctor soon traces the plague to the water supply, and finds the antidote.

However, in his paranoia, the City Administrator has already plotted a coup.  He has killed the Second Elder and now plots to kill off the humans.  John, having gone to the Sense-Sphere for treatment to the mind control, knows the City Administrator's plans but is too confused to be much help.  We discover that the waters are being poisoned by the humans left behind from the previous expedition, who want to exterminate the Sensorites to then claim the planet and the valuable material of molybdenum of which the Sense-Sphere has in abundance.  With the humans captured, the City Administrator's treachery exposed, and the antidote in the Sensorites' hands, the travellers are allowed to go.

The best quality in Peter R. Newman's script is that each of the six episodes (Strangers in Space, The Unwilling Warriors, Hidden Danger, A Race Against Death, Kidnap, and A Desperate Venture) move on the whole fast and don't get bogged down too much.  However, that very quality pushes The Sensorites down a bit as well.  In Episode Five we get a little too caught up in the Sensorite politics (the fact that the Sensorites themselves look so alike that only the sashes make them distinct does not help), and the resolution to both the plague and smoking out the source of the plague come with little to no buildup.  In fact, the discovery of the humans comes near the end of Episode Six and the revelation of both what the humans are up to and the removal of the City Administrator (who by that time had been appointed as Second Elder) was done with rather quickly to where it was almost irrelevant.

Moreover, there are one or two points that The Sensorites didn't address.  The big one was how the humans found the deadly nightshade (the atropa belladonna) and placed it to make the poison, but another one is exactly who attacked the Doctor when he was going through the aqueduct.  We are given indications that it is a monster (the growling appears to come from a bear), but what we find is that it must have been a human.  I don't know if that's a cheat but it comes awfully close.

However, one of the bright ideas Newman came up with was to explain how the Sensorites all looked alike.  According to the First Elder, the Sensorites themselves were content in their similarity, thus we could get away with the population looking exactly alike.  Even better, there were moments of humor: the Sensorites are sensitive to loud sounds, so all the times the Doctor rages he inadvertedly becomes violent.

It was a good idea to start out thinking the menace came from the Sensorites, only to find that they weren't the bad guys.  However, neither were the humans on the spacecraft, since they had not done the Sensorites any harm themselves, only having the misfortune to be humans.  Directors Mervyn Pinfield (Episodes 1-4) and Frank Cox (Episodes 5-6) worked so well that one never noticed the switch.  The closest to anything that could be noticable is the greater use of lighting with Cox: the scenes inside the aqueduct had more ominous lighting than when Pinfield was directing the spaceship scenes.  Pinfield, for his part, directed the actors quite well, keeping the tension building throughout his episodes.

Both directors were aided by the editing: the montage where the Doctor is searching for the source of the poison juxtaposed with Ian fighting for his life aided so well in both setting the scene and moving the story forward with no dialogue.

Of particular note is Norman Kay's score, which were excellent in setting the mood, in particular when danger or fear was called.  His music for when we finally see the Sensorites at the end of Episode One, which short, set the tension for next week's episode.  In the previously mentioned montage scene from Episode Four the music is so vital and well-written that it helps in getting things going.

The regular cast continues the great work.  Hartnell has softened up a bit in his interpretation of the Doctor, but when he gets mad (causing the Sensorites pain) it shows he means business.  His scenes with Ford show the relationship between grandfather and granddaughter is evolving, and Ford shows that she is slowly coming into her own as a woman.  Hill comes close to being a damsel in distress and Russell continues being guided as the man of action, but in The Sensorites we see that Barbara is a highly intelligent woman who is afraid but works despite of it, while Ian is vulnerable when his life is in danger.

On the whole, I thought The Sensorites was a well-paced, well-written, entertaining story with slightly better aliens than the First Doctor's era is usually given credit for (and better than some that are to come).

In conclusion, here is a Sensorite from The Sensorites... 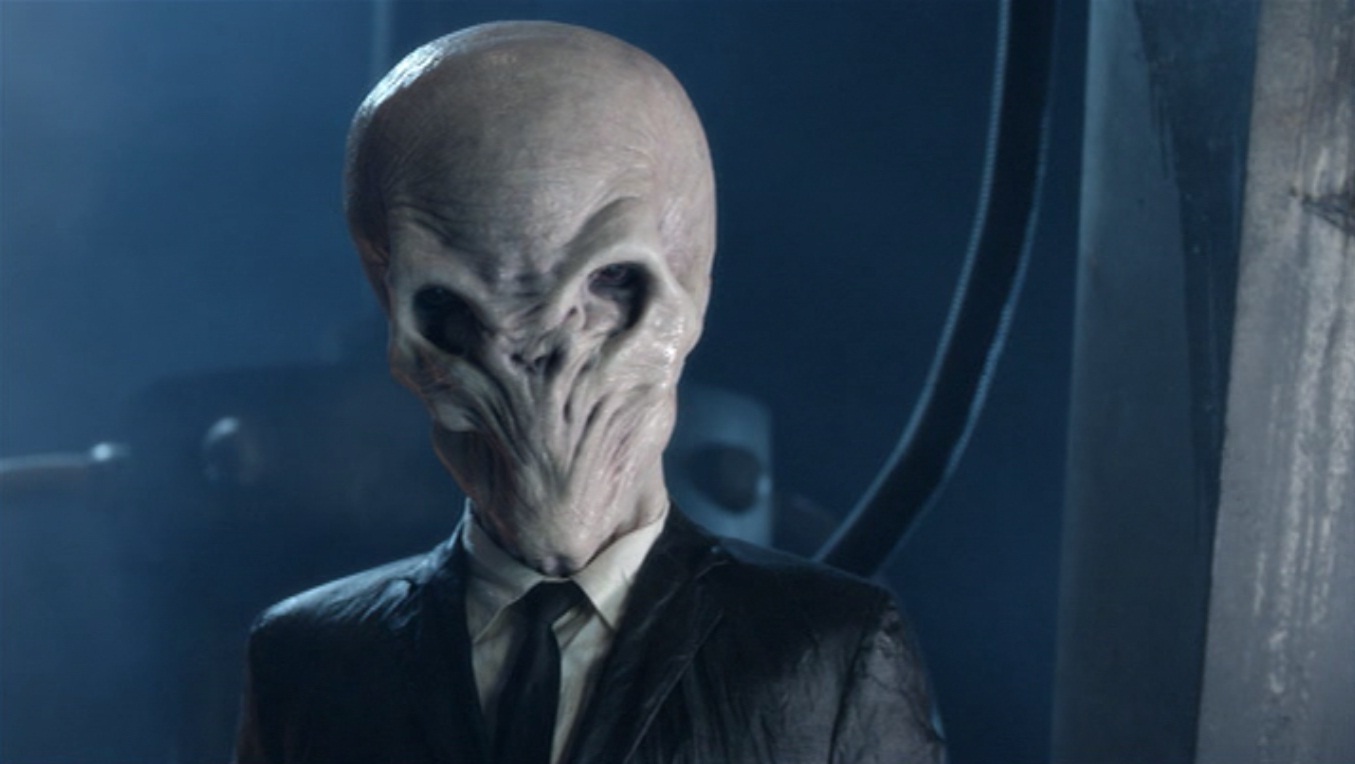 I'm told the Sensorites are closer to the Ood...

Potato, potato... I won't argue against the idea.

Next Story: The Reign of Terror