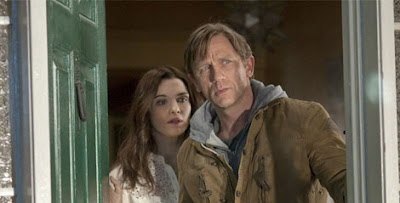 I cannot help think that, despite all his acclaim, and fame, and great physique for a man in his forties (by the way, Happy 44th today!), at heart Daniel Craig is a most unhappy man.  This idea comes not just from his public appearances (always scowling, always looking miserable whenever he is asked questions or being photographed) but in his choice of roles.

In both outings as James Bond (Casino Royale and Quantum of Solace, which I always felt described how he feels about his life), there is no joie de vivre to his 007.  Even when he's in bed with a beautiful woman, he looks morose.

Has Craig ever done a comedy, a straight-out comedy where he is able to at the very least spoof himself?  For Heaven's sake, even Garbo Laughs! in Ninotchka, sending up her own aloof persona.

I say all this because Dream House is another example of Craig's obstinacy in being so glum on screen.  Granted, there were a few moments where his character actually appeared happy.  It isn't long, however, before he resorts to form, and he is his usually Daniel Crabby self.  Dream House is going for something, but it doesn't know exactly what.

Will Atenton (pronounced AYE-ten-ten, and this pronunciation is important), has left his career as an editor to work on his novel.  He moves from New York City to the suburbs, joined by his wife Libby (Rachel Weisz) and their two daughters.  It isn't long before they learn a shocking story about their fixer-upper: there was a grisly murder there.  The father, one Peter Ward, had murdered his wife and two daughters in this house.  Trying to get at the bottom of this, Will begins his own investigation.  He suspects their new neighbor, Ann Patterson (Naomi Watts) knows more than she lets on, but she's got her own problems, primarily from her ex-husband Jack (Martin Csokas).

It isn't long before we learn a "shocking secret".

There is no Will Atenton!

Now, Peter/Will isn't sure what's what: he keeps seeing Libby, but she can't be the murdered Elizabeth, right?  As things keep getting murkier and murkier, not even Dr. Greeley (Jane Alexander) can help him clear things up.  Will/Peter eventually comes to either remember or realize what happened That Fateful Night and Will/Peter now has the mystery solved.  We then have a coda that makes everything in Dream House absolute nonsense.

Perhaps that is a bit harsh.  It isn't that David Loucka's screenplay isn't without possibilities.  It isn't even that the "big twist" in Dream House, bizarrely featured in the trailers so it's no spoiler, couldn't have worked although it doesn't for reasons I'll get to in a bit.  It's that once we get this 'twist', we can see Dream House do two contradictory things at once: both tie itself into knots and unravel at the same time.

I don't think that the 'twist' of having Will Atenton be the alternate persona of Peter Ward works because we're never given any clues or suggestions that they are one and the same.  In short, it appears to be thrown in just to make a twist.

It is stretching things to believe that when Will goes to the halfway home for criminals that Peter stayed in that no one, in particular the Admissions Clerk, wouldn't have recognized him.  Granted, she might have been hired after his release, but given that we're given the impression that he was in prison or a nuthouse for five years she may not have been there when he was, but somehow...I don't buy that. 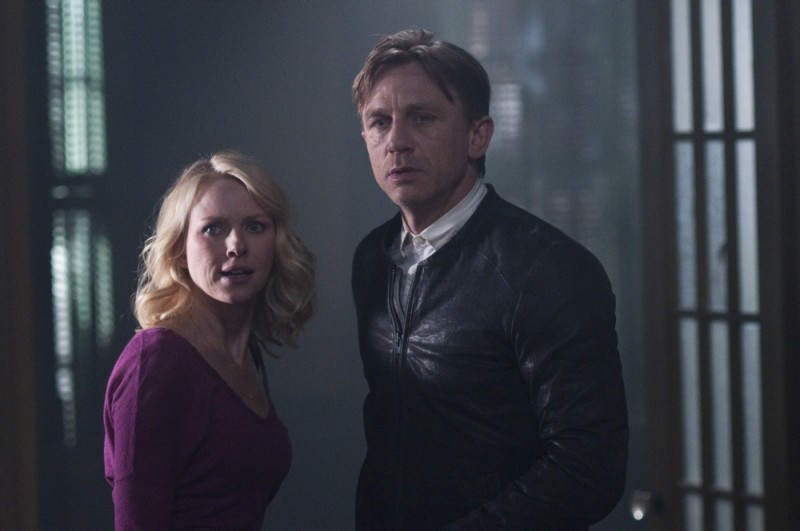 Second, there really is something off about the name Atenton as it's pronounced.  Perhaps this is the grammarian in me, but I would have thought the name as spelled would be pronounced "AH-ten-ton", not "Aye-ten-ten".  Yes, I recognize this is a rather bizarre reasoning as to why I thought something was not right from the get-go, but in my notes I actually wrote, "What a silly name: Atenton".  Was there a deliberate effort to point out that this was suppose to be a pseudonym?

Even that could be forgiven, but once we learn that Will is Peter and Peter is Will and we are all together coo-coo-ca-choo, why do people insist on calling him Will when they know he's Peter?  Is he so divorced from reality that he hears people call him Will, or are the people in Dream House so inconsistent that they forget to call him by his right name?

Truth be told, Dream House brought memories of Shutter Island in that both appear to be variations on a theme: the man who thinks he's one man but we know long before he does that he's someone else and, well, a nutter.  I didn't like Shutter Island because there was no mystery. I figured it all out within fifteen minutes and just sat there, waiting for it to get to where I knew it was going.

In the same way, Dream House doesn't have a real mystery because we already know the 'twist' before we go in and because I figured out the 'whodunit' aspect quickly; if there had been a bit of a forethought into not trying so hard to make this into a twisty mystery, Dream House could have done much better in exploring how Will could disassociate himself with a horrible crime.

Let me get into that a bit.  The resolution to how the family came to die is such a cop-out, again, absolving a character in order to give us a failed attempt at closure.

Dream House has a litany of sins.

First, the plot, which is desperate to be Shutter Island meets The Shining meets A Beautiful Mind, but only shows us that throwing in twists without a firm logic doesn't work.

Second, the performances from most of the cast leave a group of talented performers with little to nothing to do.  Jim Sheridan has done better, so it's surprising that he could make Watts and Weisz appear so one-note.  Granted, one of them turns out to be dead, but given they both were lifeless they might have all been part of Will/Peter's imagination.  Csokas didn't have any dimension, just angry all the time, so he's obviously...

Curiously, Craig is the one that at first appears to go from his usual angry/gruff persona by showing him play around with kids.  However, once we get the 'twist', he doesn't appear capable to smile.

Of course, the biggest sin in the acting realm is in having Jane Alexander in only two scenes.  Am I alone in thinking Alexander is one of America's best and underused actresses?  When you have a talent as great as Alexander to work with, why reduce her to a nothing role with only two scenes, the longest I think at three minutes long?

I also fault John Debney's score for being appropriately spooky.  Yes, I figure using the word 'appropriately' may signal that this is a good thing, but when Dream House opens, we already know we're getting a try at something eerie when the opening scene at Will's last day of being an editor signals some joy, not this foreshadowing music.

On the whole, Dream House could have been merely dumb, but the ending...the ending is what brings everything about the film crashing down into a pile of rubble.  Curiously, the ending isn't frustrating, or even downright idiotic.  What it is is head-scratching.  It really was a silly and pointless way to wrap up a rather needlessly convoluted story that was already going all over the place.

Dream House should have stuck with one story (either the 'Will finds out he's really Peter' one or the 'Will tries to find out who/what is menacing his family' one).  However, trying just too hard to make it into a mishmash of psychological thriller with a murder mystery the movie only ended up wrapping too much on itself to hold together.

In the end, this Dream House is condemned.