There Be Dragons: A Review 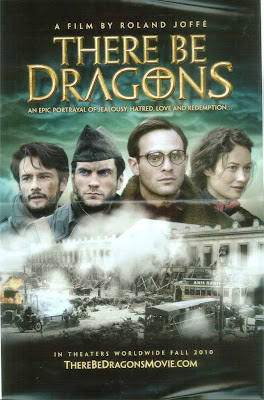 I long ago left the Catholic Church due to theological differences.  Despite that, I have great respect for the Church and think highly of Pope Benedict XVI (or Pope Benny as I lovingly call him).  As such, I go into There Be Dragons with an eye less towards theology than towards cinematic accomplishment.  I wouldn't hate it if it presented points of faith I disagreed with nor would I love it if it was in line with my religious thinking.  On the whole, I didn't hate There Be Dragons.

HOWEVER, there is a big caveat with There Be Dragons: anyone expecting a hagiography or whitewashing on the controversial St. Josemaria Escriva or the group he founded, Opus Dei, is in for a surprise.  For that matter, so are those who think both are evil.  There Be Dragons involves Josemaria Escrivia but he really is a supporting player.  In a curious manner, Escriva is really an excuse, a reason to talk about other things.  In a sense, what one thinks is the subject of There Be Dragons ends up being almost secondary to the main plot of the film, but more on that later.

Josemaria Escriva (Charlie Cox) is about to be canonized as a saint by the Catholic Church.  A journalist, Roberto (Dougray Scott) is writing a book about Escriva.  By sheer coincidence (as is the case in these stories), Escriva was friends, or at least acquaintances, with Manolo (Wes Bentley), Roberto's father.  However, Manolo and Roberto have broken off relations for many years.  Roberto wants to reconnect with Manolo, but his father has gone through much to keep his son at arm's length.

Soon, however, Manolo slowly reveals his life story.  Manolo and Josemaria were once friends in their Spanish village, but once they grew Manolo's snobbishness (along with Josemaria's more ethereal slant) caused them to drift apart.  Josemaria gave himself over to The Church, and to the group of disciples he has, imparting his deep wisdom.  Manolo grows to detest the left-wing unions he blames for pushing his father to an early grave.

And then, the Spanish Civil War explodes around them.  Manolo becomes a spy for the Fascists, pretending to be a Communist Republican (no, that's not an oxymoron).  While there, he falls for Ildiko (Olga Kurylenko), a beautiful Hungarian revolutionary.  As is always the case, this love is one-sided, for she has fallen madly for Oriol (Rodrigo Santoro--who, despite being Brazilian, is the closest There Be Dragons comes to correct ethnic casting of the major players).  With a mixture of jealousy and duty to the Fascists, Manolo sends messages as to their locations.  He frames Ildiko, and Oriol has to make a difficult choice.  However, once the Republicans finally fall, we know the truth about Ildiko's child...who has a connection to Roberto (one guess what it is).

At the end, Manolo receives forgiveness from himself and from Roberto, thanks to the intercession (in a roundabout way) by Josemaria.  We even learn that Manolo came across the good father one last time, but to say how would be telling too much.

There isn't anything particularly wrong with There Be Dragons that makes it a bad film.  It's just that writer/director Roland Joffé (who is a good director) apparently made two films that didn't quite mesh together.  Most of the movie is about Manolo and his actions in the Spanish Civil War.  It got to the point that one wouldn't be blamed if one thought There Be Dragons was Reds: Castillian Edition. This has the effect of shrinking the story of Escriva.  There are moments where we glimpse parts of his story (how he survived the left-wing fury and persecution of the priesthood is particularly effective), but because Manolo and Josemaria are kept apart for almost all of the film, we soon forget that they were connected.  Somehow, having them be friends as children doesn't quite cut it.

We also don't get much glimpse as to Escriva's dark night of the soul as the Spanish Civil War tears the nation and its soul to shreds.  The chaos of the war, the slaughter, the misery the conflict unleashed, is not a big part of There Be Dragons.  Again, we do have good moments (such as when the priesthood is driven so underground that confessions must be done surreptitiously at the zoo), but whatever compelled the men in his group to join him, we know not.  Escriva at the end, becomes a shadow in There Be Dragons: a bit distant (dare I say, saintly), separate from the rest of humanity.

This isn't a surprise: I can't think of a film about a saint where we are allowed to see the flawed human struggling towards embracing the divine (perhaps Becket with Richard Burton and Peter O'Toole, possibly the miniseries Mother Teresa: In the Name of the Poor, Jesus of Nazareth or the smaller 1999 miniseries Jesus, although the last two are not about saints but about Christ, a different basket of fish so to speak).  Most films based on saints tend to be rather reverential towards the subject, even the better ones like A Man For All Seasons, The Song of Bernadette, or Luther...oh wait, he's not a Catholic saint, but dear old Brother Martin was treated with the reverence usually reserved for one.  There Be Dragons is really no different: when we see Josemaria he is wise, loving, desperate to save the Host from the marauding hordes storming and desecrating the church.

That isn't to say we don't see flashes of broadminded thinking from Escriva.  When he attempts to give last rites to Honorio (Sir Derek Jacobi), an old mentor, Honorio at first declines, telling Escriva that he's a Jew.  Escriva does not display any anti-Semitism that sadly was associated with virulent Spanish Catholicism.  Instead, Escriva is quite ecumenical (no pun intended) about Honorio doing right by honoring his father and keeping the faith rather than ask him to convert (although it isn't clear whether Honorio did indeed have a deathbed conversion).

As I've stated, There Be Dragons is less about Josemaria and more about Manolo.  Most of the film is taken up by the conflict of the Civil War, his passion for Idilko, her rejection of him and passion for Oriol.  Whether this borders on cliche or not I leave up to the reader, but I didn't mind it (even though I think that story could have been stronger, given a lot happens so quickly).  As for the modern story (a part that seems vaguely familiar but one I can't place), a story of a son and father receiving forgiveness and/or redemption could, again, have been stronger.

One thing I WILL fault There Be Dragons is the simply awful make-up Bentley endures as the older Manolo.  He ends up looking like this: the villain from The Rocketeer.

I also was confused why Joffé decided that the American Bentley, the English Cox, or the Scottish Scott all affected Castillian accents (I am aware that Spaniards don't actually speak Spanish...they speak Castillian.  Only those in Latin America actually speak Spanish.  Tomato, tomato...).  In any case, I was puzzled by what appeared to be actors trying with varying degrees of success to sound as if they were from Spain (Scott did the best, Cox was halfway descent, Bentley was trying too hard).

This isn't to say they gave bad performances: all three did a good job despite the limitations of the script.  Joffé directed them on the whole well; although sometimes his camera work was a bit on the heavy-handed side.  When early in the film, Escriva falls, the light flooding him was a touch too much (as was the juxtaposing of his self-flagellation to the wounds of Christ).

On the whole, There Be Dragons at times tries too hard to be reverential to a subject that disappears in the fog of the Spanish Civil War.  Sometimes the film appears to forget it's suppose to be about a controversial saint, not about a man's actions in wartime.  However, There Be Dragons, despite its flaws, is entertaining, decently acted, with some good moments (in particular some of the battle scenes), and I can't fault it for that.  This is clearly not a bad piece of work, although it is clearly not a work of God.