Imitation, I'm told, is the sincerest form of flattery.  If that is so, Super 8 is the greatest tribute from an up-and-coming filmmaker to an established icon of cinema.

This is a case of pure nostalgia: J.J. Abrams paying homage to the films and themes of Steven Spielberg.  I figure there's nothing wrong with doing an homage to someone as brilliant as Spielberg from someone with great promise like Abrams, but I wonder if the buildup Super 8 had was simply too high for the film itself.

In short, Super 8 is more about the joys and wonders of childhood...with a little sci-fi in it (to misquote Sullivan's Travels).

It is 1979.  Such a beautiful time: President Jimmy Carter was leading the U.S. into a deeper recession while telling us to wear sweaters and turn the thermostat down to combat high energy costs, the Islamic Revolution in Iran was about to plunge the world into thirty-plus years of human misery, gas prices went up and there were long lines at the stations.

How one longs for those days again...

At least one gets the sense that 1979 was a remarkably beautiful time from Super 8, but even in the midst of those halcyon days for America, there is tragedy.  Joe Lamb (Joel Courtney) has lost his mother in an industrial accident, and now he and his widowed deputy sheriff father Jackson (Kyle Chandler) must go on the best they can.  While Jackson plunges into work, Joe channels his grief into helping his best friend Charles (Riley Griffiths) work on a zombie movie.

At this juncture, I should point out that the cast and crew of this film, The Case, are all basically children.

While Charles continues his quest to be the Ohio tween version of Cecil B. DeMille or George Romero, Joe continues to struggle to come to terms with his mother's death.  However, The Case puts him close to Alice (Elle Fanning), that unobscure object of desire for Joe.  He's lost in her eyes, and soon all the boys are impressed with far more than her beauty...she turns out to be a good actress.

Young stirrings of the heart, however, have to take a back seat.  While filming a farewell scene at an old/abandoned train depot, a truck comes roaring down the tracks, determined to crash into a fast-charging train.  The massive collision has the kids fleeing in terror, and in their rush to escape they leave their Super 8 camera rolling.

To their horror, they discover the crash was perpetrated by none other than their science teacher, Dr. Woodward (Glynn Turman).  In the confusion, no one realizes that things are getting out, including a mysterious monster.  Joe however, having come across a Rubic's Cube-style object, takes one. 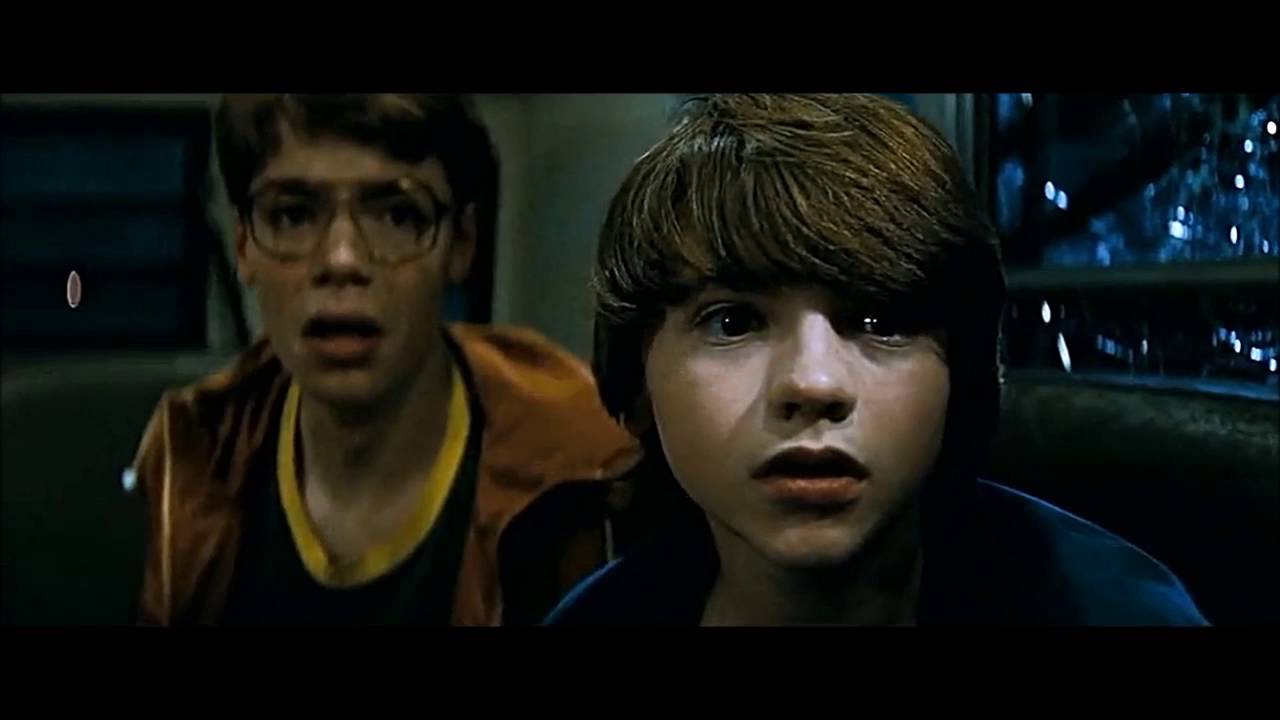 Soon, the Army comes sweeping in and in typical Army fashion tells the population the equivalent of 'move along, there's nothing to see'.  Of course, we know better.

Alice has her own struggles: her father Louis (Ron Eldard) just happens to be the factory worker whom Jackson blames for his wife's death.  Louis is a drunk and verbal abuser, but soon all that is put aside because of the strange goings-on.  People are starting to disappear, the dogs flee the town, and the power is unreliable.  In the middle of all this, Alice herself is abducted by this mysterious alien.

Joe is now determined to solve this mystery and rescue Alice.  That means getting around the Army with his filmmaking buddies, it means having to wait for Charles to wait a few days to get his film processed, and it means having to confront the alien once they find his lair.

In the end, all things are restored, and we see the final cut of The Case.

I'll go on record to say that Super 8 was marketed badly.  I think people went into it thinking this would be some alien adventure story.  Instead, what they got was a loving homage to a lost time of innocence with an alien thrown into the mix.

Truth be told, the alien is not only secondary to Super 8, but once we get the big reveal, the alien isn't all that impressive. The alien is more either a gimmick to give the kids a threat or a tip of the hat to Spielberg's fascination with the subject a la Close Encounters of the Third Kind and E.T.

Even worse, when we get the motivation for the alien's rampage, it is almost laughable.  "Through pain and lack of compassion, we have taught him to hate us all. We have turned him into an enemy", we hear Dr. Woodward narrate over film of the conditions the alien endured.

I had to think on that for a moment: all the alien wants is to be loved.

Somehow, I couldn't shake the feeling that Abrams was trying to send some sort of message about tolerance and compassion.  I can't say that he had this in mind while writing the screenplay, but that did cross my mind.

In any case, Super 8 draws from many Spielbergian themes: the loss of parents, the innocence of seeing the world through children's eyes, the fact that what we fear is really not harmful.  Abrams has studied from the Master very well, and Super 8 is as close to a Steven Spielberg film that Spielberg wouldn't make.

There are many clichés in Super 8: the drunk/abusive father, the eager little filmmaker, the military holding dangerous secrets (big hints of E.T. abound), even the damsel in distress (as I watched Alice get carried off by the rampaging alien, all I could think of was that it's always the case that a woman gets in the way and must be rescued).   There are also one or two points of logic that I was puzzled by.

Joe is enamored of Alice, but shouldn't he have known that romance with the daughter of the man his father hates might be upsetting to Jackson?  It really doesn't come as a surprise to learn that Louis is Alice's father, but I couldn't shake the idea that it was somehow a bit of a cheat to make Alice, the girl he loves, the only one forbidden to him.

I'm going to digress here and say that while Super 8 is an homage to early Spielberg, the spectacular train wreck was pure Cecil B. DeMille.  Spielberg has been quite open about how DeMille was an early influence in his life, and how the first film he saw was The Greatest Show on Earth which has as its climax a spectacular train crash.

DeMille would have loved Super 8's massive train crash.  It's no surprise that this centerpiece of Super 8 was evocative of DeMille, since Abrams set out to mimic Spielberg, and Spielberg set out to mimic DeMille.

What really makes Super 8 into a better film is its cast.  First, immense credit should go to Fanning, whose Alice is mysterious without being aloof, who brings a vulnerability, even a haunted quality, to her character.  When she is asked to play the scene at the depot, she brings such a beautiful and sad performance that we can almost forget that this is a kid in what is suppose to be a kid-made film.

Courtney also never makes Joe either too depressed or too juvenile, maintaining a strong balance between a child growing to adulthood and a tween still with enthusiasm and confusion about life.  Both of them, in particular Fanning, should have strong careers post-Super 8.

Even the adults are good.  I'd like to know what deal Chandler signed with the Devil to continue looking a good ten to twenty years younger than his 46 years.  In a serious tone, his performance as the man in mourning who takes his job seriously and will not be thwarted in rescuing his son shows that he is underused in Hollywood.

I'll be honest: I was not overwhelmed with Super 8 the way many people were.  It was a little too sentimental for my taste, and the alien aspect of the story was not as interesting as the reflections of a lost era.

However, the performances of the minors (especially Joel Courtney and Elle Fanning) brought out the positive aspects of the film: a well-acted ensemble piece.  I can't emphasize enough how Super 8 is not a science-fiction film but more a nostalgia piece.  It has science-fiction elements, but they really are secondary to the interaction of the humans.

Sometimes, those can be even more terrifying than things from another world.