We've had two versions of Justin Timberlake in 2011.  In Friends With Benefits, we see the lighter side of SexyBack, where he makes the effort to be comic.  With In Time, SexyBack now wants to show us that he's a genuine action star.

Curiously, what he hasn't shown in either is that he's an actual actor.  In Time has a great premise for a movie, but it goes off the rails rather quickly due to a bad execution and universally blank performances.

In an alternate future, people are genetically programmed to stop ageing at 25, then the clock literally starts running.  They have one year left, unless they can add more time to their lives.  Unfortunately, time literally is money: everything costs you the time of your life (you get a sense that writer/director Andrew Niccol was having some fun with all the puns).  With time being subtracted from you, you could literally go broke in a day or two (especially if you have a day to live and a bus trip costs two hours).

Will Salas (Timberlake) is a poor kid in the ghetto, living day by day with his mother Rachel (Olivia Wilde).  As a side note, the character's last name always sounded curious to me, suggesting he might be Hispanic when Timberlake clearly isn't. He and his best friend Borel (Johnny Galeki) work hard but can never get ahead.  Rachel is going to celebrate her 50th birthday (she's been 25 for 25 years), but before Will gets together with her, he meets up with Borel for drinks.

While there, a stranger is buying drinks for everyone.  He is Henry Hamilton (Matt Bomer), an amazingly wealthy man with centuries on his arm.  This of course draws attention from the Minutemen (again with the puns), a gang headed by Fortis (Alex Pettyfer), a thug who terrorizes the poor people.  Will helps Henry escape, but what Hank really wants to do is "time out".  Henry surreptitiously gives Will two things.

The first thing is the truth about time.  The wealthy are not only hoarding time but jacking up the prices on the poor to have them die so they can live.  "For a few to be immortal, many must die", Henry tells Will (I could hear "from each according to his ability, to each according to his need", but I digress).

The second thing he gives Will is his own time.  In short order, Henry dies and Will has nothing but time on his hands or rather, on his arm.  Even with all that time which people can transfer to each other by holding each other's arms, he is too late to save his mother, who literally races against time (enough with the puns already).

He does manage to give Borel a decade, but then decides to strike a blow against The Man.  With his time, he is able to move on up to the East Side, in this case, the enclave of New Greenwich.  He isn't sure though, exactly what he'll do up there: either schmooze it up or lead the Time Spring against the Regime.

I could argue In Time doesn't at this point know what to do either and doesn't appear to want to head in either direction but is forced to pick one, so he opts for destruction.

Fortunately, he comes across a casino, where he does battle with Phillipe Weis (Vincent Kartheiser), a billionaire who has nothing but time.  He has a daughter, Sylvia (Amanda Seyfried), and she and Will are instantly smitten.  However, Timekeeper Raymond Leon (Cillian Murphy) suspects Will murdered Henry for his time, and he also thinks those from the ghetto should know their time is up.  He crashes the Weis party, but Will makes an escape, taking Sylvia with him.

From there, In Time just completely collapses.  It becomes a chase film where Will and his Patty Hearst-wannabe Sylvia start stealing from the rich to give to the poor, Timekeeper Raymond pursues them, Phillipe would rather see his daughter arrested or killed rather than give the poor a thousand years, Borel drinks himself to death with nine years left on his arm, and Fortis is after Will for his time.

The curious thing about In Time is that for a movie about the value of time there isn't a sense of urgency to anything or anyone.  Instead, In Time plods along with little rhyme or reason as to why anyone does anything, sometimes as to why characters are there in the first place.

Right from the get-go the film doesn't bother to take much time in setting up the world it wants to portray.  We just get quick hints of this world where the poor have little time and the rich figuratively kill off the proletariat to hold on for dear quasi-eternal life.  Take for example the relationship between Will and Rachel.

Wilde appears only twice, so we don't see how strong their bond is suppose to be.  Even worse, when Mamma dies the attempt at drama appears forced (having her literally drop dead at the very moment they reach each other) you don't feel anything because you never really got to know Rachel.

It doesn't help that Wilde and SexyBack just don't show much range.  I won't put all the responsibility of their flat performances on them.  Everyone in In Time was flat.  They looked at times genuinely bored to be there, given that none of them expressed any emotion on-screen.  The line readings ranged from almost exaggerated in their zombie-like delivery (as with Kartheiser) to the merely sleepwalking Bomer.  Even when a character is suppose to be angry or raging, the delivery of the lines makes the viewer think Niccol told them to be more subdued.

Only Murphy appears to try to act, showing a cold professionalism to his Timekeeper.  Somehow, a movie about him appears to be more interesting than that of Sylvia and Will.  It may have even been closer to this generation's Blade Runner that In Time wants to be. Along with Logan's Run, Blade Runner appears to be a source of inspiration for Niccol, though the end result is closer to Michael Bay's The Island.

Given how bored and boring being rich appears to be in In Time, one wonders why anyone would want to keep on living if one has nothing to do.  Talk about the idle rich.

In terms of plot we get a whole range of ideas that are introduced but then dropped, or points that don't make much sense.  Timekeeper Leon has a history with Will: apparently Leon knew Will's father and probably came from the ghetto himself. He also knows that Will is doing the same thing his father did: apparently give out time for free.  However, we never learn more about the connection between Will and Leon

Perhaps they were saving that up for a sequel that was hinted at the end.  How does Leon know Will's dad?  Were they friends?  Enemies?  What did Salas Sr. do that maybe cost him his life?  All questions left unanswered.

Another strange plot point is when Will escapes the Timekeepers with Sylvia.  They have taken away his centuries and left him with only two hours.  It appears that he is being arrested at night.  However, despite having only two hours of life, he's still racing down to the ghetto with his hostage well into the morning.  Somehow, to believe what we're seeing, he has to either have gotten more time or just taken it from Sylvia (both highly unlikely).  The more logical explanation: Niccol just forgot about the two-hour time limit he had written.

If that weren't illogical enough, we're suppose to believe that Will and Sylvia survive a fantastic car crash virtually unscathed; while that didn't kill them, the loss of time will?  Just one after another moment of really stupid, unbelievable and ridiculous situations that cost In Time.

The character of Sylvia is never defined: does she really come to sympathize with the poor or she just getting her Patty Hearst on?  The love story between Will and Sylvia appears to be there because SexyBack needs a love interest.  Seyfried appears bored or confused in In Time, but it suffices to say she does not convince anyone that she both fell in love with Will or came to sympathize with his Time Spring (or in their case, Spring Time).

Pettyfer's whole appearance in In Time seems to come from another movie altogether.  We don't know what he's doing there, what purpose his character serves, though it is nice to hear Pettyfer speak with his native British accent even if how this Cockney ended up in what appears to be East Los Angeles we don't know.  As much of a threat he's suppose to be is laughable given how inept he and his gang are.  How he came to rule over the ghetto we don't know and frankly don't care. 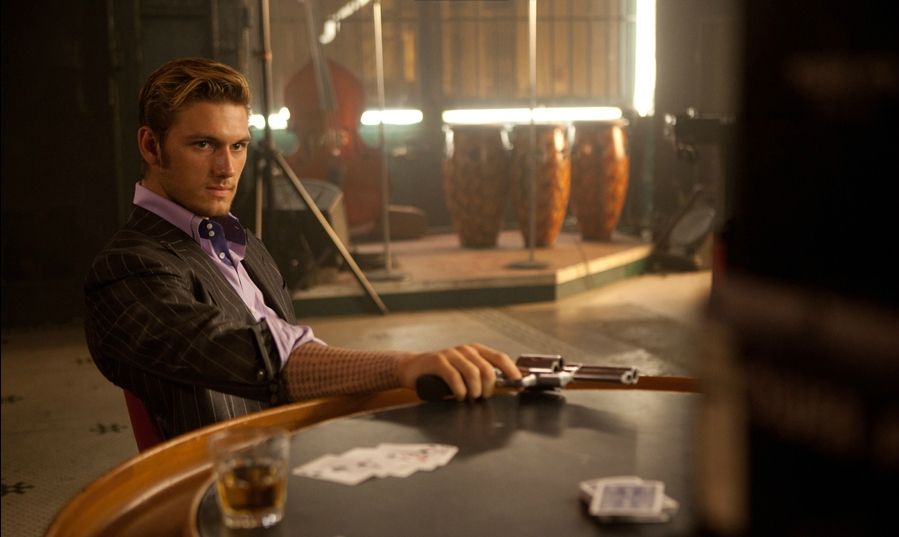 Fortis is suppose to be a menacing, threatening force, but Pettyfer is just not good enough as an actor to play him as nothing more than a pretty face trying to be intimidating.  He's suppose to be a major antagonist to Will, but few things are less riveting than an arm-wrestling match.  The build-up to Fortis' and Salas' showdown is almost comic.

Finally, while the symbolism of using time as currency to represent how the rich oppress the poor may be drawn from current events (echoing some Occupy Wall Street odes even though In Time was made before this movement), it doesn't work.  We are told by Henry that 'there is enough time for all' and that basically the poor are being charged time to live, but we don't have any evidence to support the idea that time is being held from the hoi polloi.

Even worse, when a poor person is granted a decade, what does he do?  He Drinks Himself to Death with Nine Years Left!  Oddly, for a movie about how evil the rich are to hold on to their time, In Time makes the case that the poor are flat-out irresponsible when they come into some time and thus, they just aren't worth the time.

In Time may try to draw parallels to our our own economic times but on the whole, the film is not as smart as it thinks it is.  "Is it stealing if it's already stolen?" is the mantra of the rightness of taking time from the rich to distribute to the poor, but In Time never proves that time was stolen in the first place.

Actually, I'm going to walk that back: In Time does prove time was stolen.  It was stolen from the viewer.