Jack and Jill: A Review 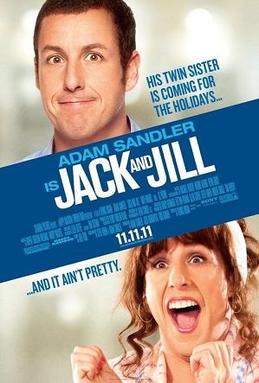 Part of me simply does not want to be harsh with Jack and Jill.  After all, this is an Adam Sandler comedy, and throughout his career Sandler has catered to making films that require less than a modicum of thinking, appeal to the humor of teenage boys (and those who think like them), and has a few trademarks, everything from the calls for sentimentality within the bathroom humor, children who behave badly, jokes and setups that even the worst Borscht Belt comic would pass on, the hot shiksa wife, and a lavish vacation (has this guy even HEARD that there's a recession or about that Occupy Wall Street...thing).  In many ways, Jack and Jill has nothing going for it, but even for the low standards it's aiming for, it still provides few laughs and many groans (at least to those with IQs higher than 100).

Jack Sadelstein (Sandler) has it all: Erin, the hot wife who converted to Judaism for him (Katie Holmes, whom I digress to point out is twelve years younger than her film husband), two children (I figure the Indian child is adopted), and a somewhat successful career as a director/producer for television commercials.  Right now his main goal is to get Al Pacino to promote a new line at Dunkin' Donuts (the Dunkaccino--get it).  Obviously, a legendary actor like Al Pacino is not about to do a Dunkin' Donuts commercial, but still Jack aims for it.

Unfortunately, Jack's identical twin Jill (Sandler again) is coming.  Jill is a boorish, possibly mentally unstable woman: insulting Jack and others without thinking she's doing anything wrong, unnaturally attached to her pet bird, apparently unaware that she perspires so heavily she leaves sweat marks on the bed.  She is so out of touch with reality that she thinks being homeless means someone is deaf and, in what is suppose to be a funny scene, continuously slapping herself to see if Jack feels it.

Somehow, Jill doesn't appear aware that her Bronx manner would be off-putting to anyone, let alone her endlessly frustrated brother.  However, things take a patently bizarre turn when Al Pacino (as Al Pacino) has a meltdown on stage, with the publicity embarrassing him.  Seeing this as his chance, Jack attempts to get Pacino to do the commercial, but Al isn't interested.  Al Pacino, however, IS interested in Jill.

Jill, apparently  unaware who Al Pacino is, has no interest whatsoever (although the date Jack wrangled for her, for some reason, decides to hide from Jill).  She is perplexed as to why Jack doesn't appear to stand her, even as she extends her stay from Thanksgiving through Hanukkah through Christmas to New Year's and after.  Pacino becomes thoroughly enthralled with Jill, willing to do the ad for a chance to have Jill for his own.  Therefore, it's off to a European cruise with Jack's whole family.

Eventually, Jack in desperation dresses as Jill to fool Pacino, Jill finds a welcoming group in the family of gardener Felipe (Eugenio Derbez--whom I didn't find funny in Spanish, let alone English), and the Sadelsteins realize how important family is.

Again, I point out that Adam Sandler comedies are those that are a one-joke setup that attempts to throw in a great deal of violence and dim-witted characters with some sort of redeeming value.  That being the case, I find it difficult to trash Jack and Jill because one should know that it is going to not only be stupid but that will be devoid of many laughs.  However, Jack and Jill in its mercifully short 90-odd minutes wears its premise thin.

It also manages to be highly insulting, not just to the intelligence of audiences.  Maybe Sandler (along with co-writer Steve Koren from the story by Ben Zook) thought that ethnic stereotypes are funny because they think humor aimed at the characters being Jewish are funny.  Therefore, when they show Felipe's family picnic, it's all right to have all the characters named "Jose, Jose Jr., Josefita," etc.  It brings to mind My Big Fat Greek Wedding, when we were introduced to "Nick, Nick, Nicky, Nick Jr.".  I didn't find it funny there and don't find it funny now (and seeing Derbez with both a ridiculous make-up job as Felipe to make him DARKER than the Mexicans I know or in make-up AND drag as the family grandmama).  Ethnic humor can easily slip into offensive stereotypes (like all Mexicans coming from large families where there's a Jose, play soccer and eat too much).

There aren't any performances in Jack and Jill, except for Al Pacino, who delivers his best performance in years (decades maybe) as an unhinged version of himself.  It's clear Pacino was taking pleasure in playing "Al Pacino", who is so besotted with Jill for no discernible reason.  I'll leave it up to you whether it's good that Pacino can laugh at himself or sad that he gave a better performance in Jack and Jill than he has in such more serious fare as 88 Minutes or The Son of No One.

Holmes just does what most wives of Adam Sandler characters do: just stare lovingly at her older husband and be supportive to the point of idiocy.  Erin apparently is the only character who doesn't see that Jill has...issues.  This is where Jack and Jill fails as entertainment (even if granted, I don't think they were actually trying).  We are asked to care about Jill, to like her, but the character is so boorish and so clearly out-of-touch one wonders whether she is either mentally ill or just plain crazy?  She tells her Indian-born nephew that she's surprised his sister figured out "this computer thing" given he's from India.  Really classy, Sandler.

The whole sequence of her attempting online dating shows her as a person who appears never to have actually SEEN a computer, let alone used one.  When she attempts to "press here", she puts her finger on the screen repeatedly.  In what I consider curious, the dating sites selected for her are odd given how Jewish she is.  Even I, goy bourgeois that I am, have heard of J-Date, a website specifically aimed at the Jewish community.  What, the Sadelsteins, both paradoxially hyper-Hebrew and WASP never heard of it?

I digress that in a cameo, I could almost see Norm McDonald tell himself, "this movie is bad, even for me".

As I was stating, Jill is a remarkably unpleasant woman: bigoted, uncouth, oblivious to how she treats others or embarrasses Jack or herself at every opportunity, and apparently one who delights in her ignorance and poor public behavior.  With all that, in typical Sandler fashion, he and director/enabler Dennis Dugan almost demand that we feel for her, even love her, when they go out of their way to present her as someone you don't want to be around.  It does, when one thinks on it, make no sense that Jill is so quick to reject the one person who shows her any interest (and who also is the only person who is patient with her issues, because again we're not sure if Jill is merely mentally ill or just as the saying goes, batshit crazy).

I won't lie: there ARE laughs to be found in Jack and Jill.  All of them come from Pacino, such as when Jill (who has apparently never seen a baseball or a baseball bat despite coming from the Bronx) accidently smashes his Oscar.  After apologizing, she tells him he must have plenty of those (since she doesn't appear to know what she actually broke).  His (remarkably calm) response is, "You'd think so, but I don't".  The final number where he does a Dunkaccino Rap is hilarious (and I can see Pacino and Chris Cooper teaming up to give Dr. Dre and Eminem a good run for their money).   Who knew a couple of old white guys could turn out to be such good rappers?

Jack and Jill is Junk.