Doctor Who Story 215: The Lodger 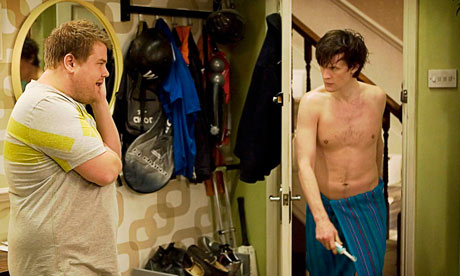 And When We Get Behind Closed Doors...


There comes a point in life where one has to leave home. The Doctor, for all his wanderings, has never had an actual home of his own (minus Gallifrey, and now that appears to be gone forever...I still have hope). The Lodger, therefore, would be a milestone in that it's the first time he's had to behave like your average, ordinary bloke and tried to pass himself off as 'one of us'. I suppose all this was done for laughs mixed in with some good old fashioned horror courtesy of the Room Upstairs.

The TARDIS is being prevented from fully materializing, and The Doctor (Matt Smith) jumps out of the ship in time to see it dematerialize with his Companion, Amy Pond (Karen Gillan) still aboard. Meanwhile, a man named Craig (James Corden), with his best (girl) friend Sophie (Daisy Haggard) are calling it a day. It's obvious that Craig likes Sophie and Sophie likes Craig but as in all romantic situations they can't quite tell each other how they feel.

As it happens, Craig is in need of a flat-mate (roommate in America), and who should come around looking for a place to live but our dear Doctor? It's all part of a plan, though. The fact that the TARDIS can't fully materialize and is trapped in some sort of Localized Time Loop is related to the goings-on of the flat/apartment above Craig's. While Amy monitors the situation from the TARDIS, the Doctor tries his darnedest to be just one of the lads. Hilarity ensues, right down to a football/soccer match.

However, there is serious business at hand. People have been disappearing, being called up to the second floor by mysterious voices. Craig's own life is in danger when, against Doctor's orders, he touches a mysterious mold that has been growing above his ceiling. When Sophie herself is in danger, the Doctor (along with Amy and Craig) discover the secret of what is upstairs and, in a sense, bring down the house. 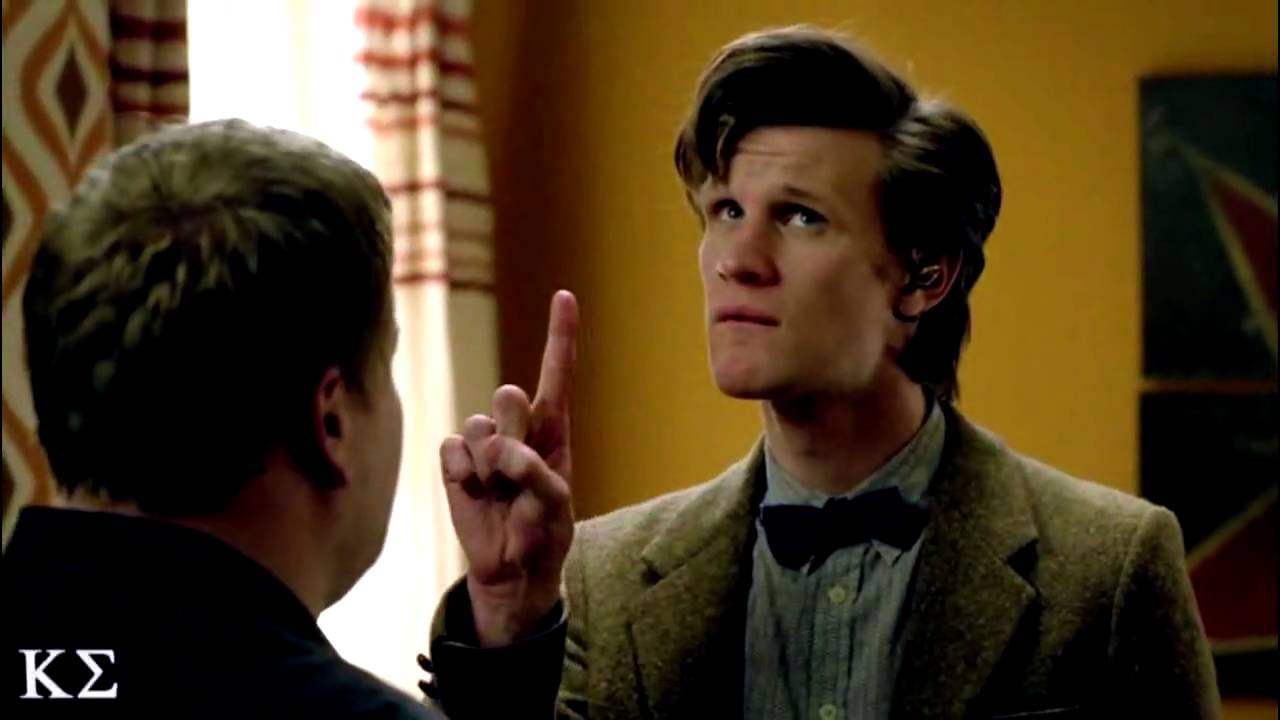 The Lodger seems to be going for a lot of comedy, which is fine, but I wonder if Gareth Roberts' script didn't make The Doctor a bit of a bumbling idiot.

My biggest complaint on this point involves when he's been invited to play soccer with Craig and his friends. He asks Amy something along the lines of "Now, that's the one with the sticks, right?" Given how the 5th Doctor was proficient at cricket, it strikes me as just odd that he wouldn't know 6 regenerations later the difference between cricket and soccer/football. You'd think that after having spent so much time with humans he'd know how to behave around them, but no, all these little bits were done to show just what a funny 'fish out of water' the Doctor is.

Side note: I figure the soccer sequence was done to cater to Smith's still-impressive football skills. Landon Donovan, watch out.

Neither did I find it funny (or even relevant) when the Doctor goes to work, filling in for an ill Craig. Finally, I didn't think this "Doctor Goes Domestic" bit to be at all funny, and I think the Doctor wearing nothing but a towel menacing an alien with an electric toothbrush may be one of the Worst Moments of Series/Season 5.

I was also confused when The Doctor head-butted Craig to reveal a lot of information. It was nice seeing a montage of Doctors, but at this point I just didn't know what to make of it or where it was going. I'll confess to being confused.

Rush-rush-rush-quick-quick-quick. In short, I cannot get over the idea that The Lodger was trying desperately to make me laugh and not doing it.

I also want to say this: OK, who didn't think the Doctor was going to be at the door when Craig opens it to tell the person there, "I Love You?" It just struck me as so obvious as to be expected, a bit cliché. Add to that this odd bit: in one scene where Sophie and Craig are talking in the hall, there is a painting of a clown between them that I couldn't stop focusing on. It was the creepiest clown portrait in history and the fact that director Catherine Morshead had it so prominently placed between them made me wonder if I should have paid more attention to it than to the conversation.

As for the voices that lure the victims to the Upstairs Room, the last one sounded too much like the child's voice in The Empty Child Parts 1 & 2 (The Empty Child/The Doctor Dances) to not have me flash back to that episode. One of the victims appeared to have already been physically abused before being lured upstairs, and it just gave me the creeps.

This isn't to say there aren't good, even great things, about The Lodger. Roberts' script gives Smith an exceptionally beautiful speech about "Trying Better Than Failing", chastising Sophie and Craig for settling when they could go for much more. Smith's delivery of this speech is one of his best pieces of acting in the series (may be one of the Best Moments of Series/Season 5).

Gillan, though not a major part of the story, still brought a sense of anxiety and fear in Amy (and with the comedy about the bow-ties even an attempt at laughter, though I didn't laugh). As for the guest stars, both Corden and Haggard are good not great as the average couple who are in love but who cannot express it to the other. They have a 'regular man and woman' quality to them, and their scenes together, especially in their first, speaks volumes about the subtext between them. It's a scene that is all too familiar to anyone who has fallen in love with their friend.

As for the conclusion of The Lodger, at first I thought I was seeing a glimmer of hope that perhaps my hopes that more Gallifreyans could be kicking about could be true, but I found I might have been mistaken. And of course, we have that crack. By this time, I wasn't surprised, but luckily my mind was occupied by wondering if the Van Gogh magnet on the refrigerator was deliberately suppose to remind me of Vincent & The Doctor to really care.

I'll say this about The Lodger: it deserves a second viewing. I think there was far too much focus on how funny, how quirky, how goofy the Doctor could be in a domestic situation which distracted from the danger above them (side note: the danger they faced brought to mind both The Empty Child and The Idiot's Lantern. Don't know why, just did).

It was almost as if there was a mash-up between Doctor Who and Friends. I wasn't overwhelmed with The Lodger. Perhaps a better title could have been The Beast Above?