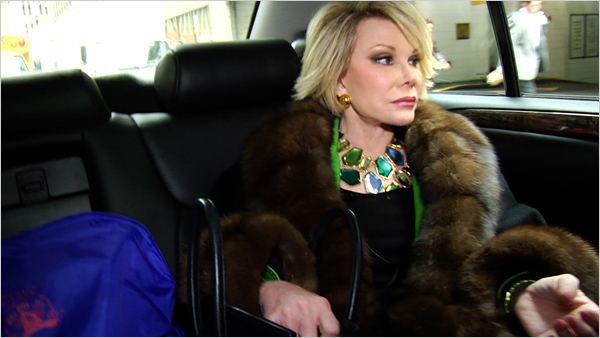 JOAN RIVERS: A PIECE OF WORK


The Face That Launched a Thousand Quips...

Joan Rivers is a legend, and she's not at all happy about that. She knows she's influenced many female comics ranging from Roseanne Barr to Tina Fey, Margaret Cho, Chelsea Handler, Sarah Silverman, and Kathy Griffin (whom she seems to have some sort of pathological hatred/jealousy towards). However, she is not interested in being praised and especially in being enshrined. Rivers wants to work: get club dates, be on television, continue gaining an income to ensure the life to which she's become accustomed to. Moreover, she wants respect, to be seen as a serious actress rather than 'just a comedienne'. Joan Rivers: A Piece of Work, follows her on her seventy-fifth year as she keeps looking for work, looking for respect, and more important, looking for cash.

We get Rivers telling us her story via interviews and clips from her career then and now. Many of the more well-known points in her biography are hit: her early appearances on The Ed Sullivan Show, the rise and fall of her relationship to Johnny Carson, the failure of her nighttime talk show and the ensuing suicide of her husband Edgar Rosenberg, and cuts them with the various events of her eventful 75th year: various comedy club appearances, London tryouts for her new play, Celebrity Apprentice, a Comedy Central roast, paying tribute to the late George Carlin at the Kennedy Center when he was posthumously presented the Mark Twain Prize for American Humor.

That last one gives an insight into Rivers' conflicted nature that appears in A Piece of Work. She is to a certain point thrilled to be appearing at such a major event (complete with television exposure it will give her), but she also is puzzled why Carlin would be part of something so 'establishment' when he, according to her, was so 'anti-establishment' and made a career out of that persona.

It strikes me as curious that of the ten years the Mark Twain Prize has been presented, Rivers herself has not been a recipient of this award in spite of her career, while Tina Fey, who is only 40 years old and certainly hasn't had the career or been as influential on others as Rivers, has. That certainly gives credence to Rivers' long-held belief, which she discusses in the documentary, that she is not taken seriously by critics, unlike Fey, whom critics constantly swoon over.

The fact that all her contemporaries are being presented Mark Twain Prizes or Kennedy Center Honors while she still works small clubs appears to be a constant source of irritation, aggravated more by the fact that she hears how 'influential' and 'groundbreaking' she is. In A Piece of Work, Rivers points out (rather sharply) how Griffin is basically taking all the big club dates while she still has to fight for small venues and better dates.

There is a certain anger within Rivers that she doesn't try to hide: anger at being 75 and still working (keeping up an intense schedule that would exhaust many people half that age), anger of being treated as an antique to be respected instead of an actress to be hired, anger at having her work dismissed by higher-ups because of who she is, anger at being treated as a joke merely for telling them.

This is shown when she gets recognition, not at a tribute at the Kennedy Center, but a Comedy Central roast. She knows that it will focus on her age and plastic surgeries, and the clips they show prove her point. While Rivers doesn't want those aspects of her life and persona to be the central points, she succumbs to this rather dubious honor because there is money to be made. In fact, although she has a lavish apartment in New York and gives every indication of being well-off financially, Rivers insists that she needs to work for the money. While watching A Piece of Work, I got the sense that she needs to work to sense that she's still vital and alive. 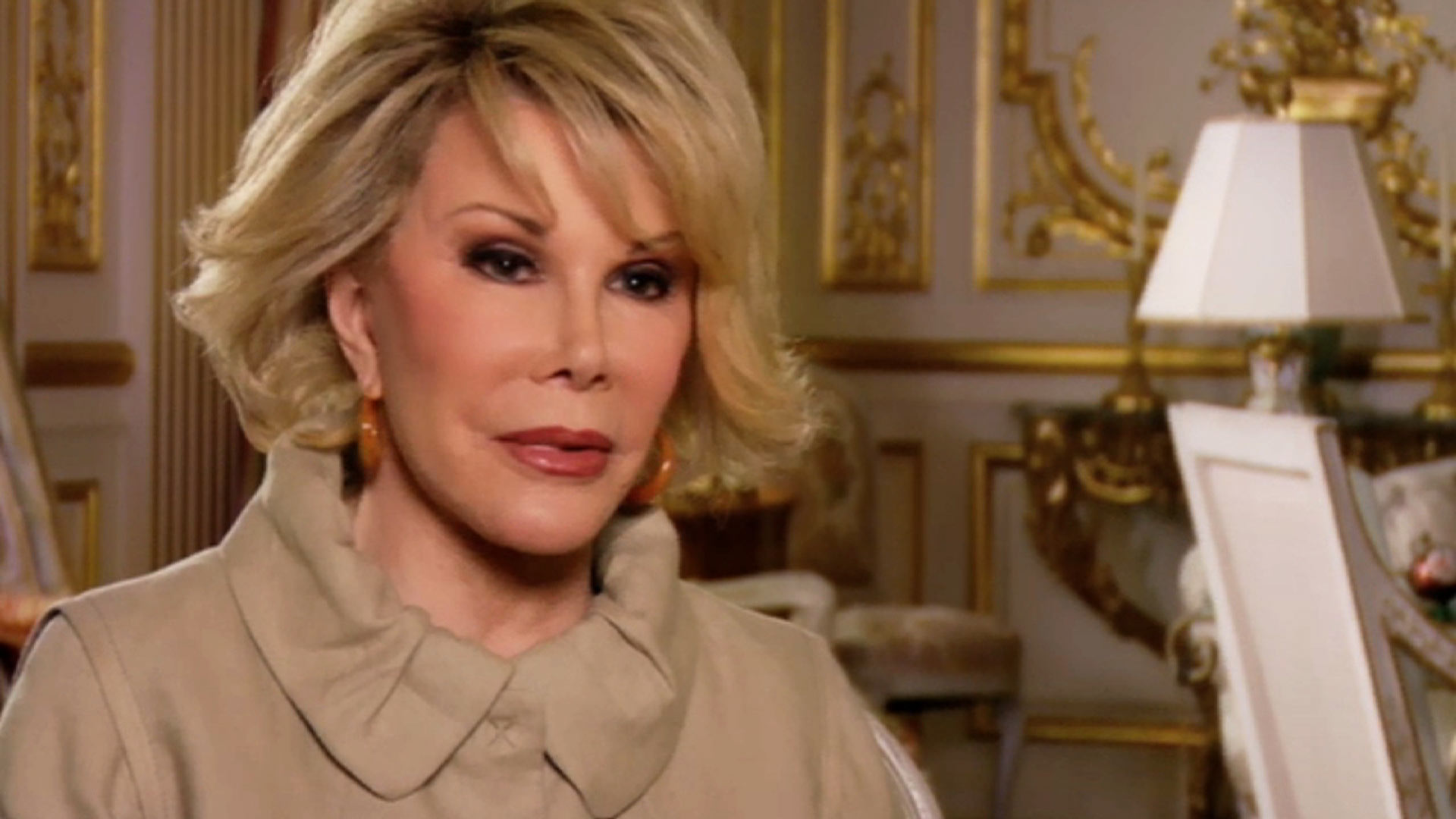 As she herself states, "anger fuels the comedy", which she insists she almost fell into by accident, using stand-up to earn some money while she pursued a more serious acting career. However, despite her simmering anger and frustration, A Piece of Work also shows us a side Rivers under normal circumstances wouldn't show. Every Thanksgiving she goes to hand out meals to those ill and alone through her work with the charity In God's Love We Deliver (which she delivers via limousine), then gives a gentle, heartfelt prayer of thanks for her life, family, and career at her own lavish dinner.

She shows us the hurt she goes through when she is forced to fire her long-time manager Billy (an especially sad episode that brings tears to her). She also talks about her falling out with Carson, and we can tell that she still has reverence for him, a love for him, and the hurt feelings she still has all these many years later over his refusal to speak to her after she left her "permanent guest host" post at The Tonight Show and the chaos that her own late-night talk show brought about, up to the suicide of her husband.

I would argue that she should have talked more about Tears & Laughter: The Joan & Melissa Rivers Story (aka Starting Again), the television movie she and her daughter Melissa made about Rosenberg's suicide and its aftermath where they played themselves. I remember watching it, and remember reading and hearing all the harsh criticisms (with some merit) about how tawdry it all was that they were reenacting rather horrifying moments in their lives. Given how "reality television" has degenerated to more tawdry exhibitionism, even in this age of Oprah, Dr. Phil, and Celebrity Rehab, Tears & Laughter now seems more in line with Masterpiece Theater than Jersey Shore.

Tears & Laughter, despite all the best intentions, did just as much harm to Rivers' reputation as anything, and whether co-directors Ricki Stern and Annie Sundberg decided it was only a footnote I do not know.

They do however, get Rivers when she's at her best: when she's performing. Some of her material will have you laughing, even the jokes that cause Rivers the most trouble, such as when her idea of referring to First Lady Michelle Obama as "Blackie O" gets shot down, or when a heckler takes aim at a Helen Keller joke because he has a deaf son.

In fact, the heckler shows both her anger and her quick wit, how she soon takes charge of the situation and turns it to her advantage. Still, it's evident that the heckler had an effect on her, given how she talked about it after her set ended. While not being unsympathetic to the heckler's plight, she reflects that him venting was probably 'therapeutic'.

Contrary to whatever Rivers may fear, Joan Rivers: A Piece of Work shows her as she truly is, ever the trooper, wanting to work and doing her best at the career that she has. She has us like her, and when she wins Celebrity Apprentice we cheer for her, especially since she beat the woman who got Melissa off the program. Though she may protest, the woman behind the face-lifts is quite attractive, in her love for her daughter and grandson, and in her love for striving to be the big hit she knows she should be and will be.

"My life is just...jokes", Rivers muses at one point. Joan Molinsky Rosenberg, we couldn't find a better way of putting it ourselves.