The Balcony Is Closed. The End of "At the Movies" It would be fair to call Roger Ebert and the late Gene Siskel the deans of televised film critics. All of us who review films own them a great debt. Whatever we may have thought of their views on individual films, their passion and love for films was total and sincere.

Siskel & Ebert was inspirational to those of us who love film because we could hear intelligent conversation about what made a good film good or a bad film bad without it being grandiose and esoteric. It was no longer, "I liked it because I liked it", but because of such things as acting, story, mood. As is true of life, the viewers did not always agree with their views. They sometimes didn't agree with each other. However, what they did share with each other (and us) was a true love of film: film as Art, film as Escapism, film as Entertainment, film as a positive in our lives.

After Siskel's death, Ebert looked around for someone to sit alongside him (it would be disingenuous to say Siskel could be replaced). Whom he eventually selected was Richard Roeper, fellow Chicagoan and in spite of his relative youth more cantankerous than either Siskel or Ebert. Once the newly-christened Ebert & Roeper came along, we still got the intelligence, but we also got better fights. 
as in Lyons and Mankiewicz. This team should have worked; at least on paper it did. Lyons is the son of film critic Jeffrey Lyons, Mankiewicz the grandson of Herman Mankiewicz (co-writer of Citizen Kane) and grand-nephew of Joseph L. Mankiewicz (writer/director of All About Eve). Both worked around the film industry: Lyons on E! Entertainment and Mankiewicz on Turner Classic Movies. Both should know what makes a good film and a bad film.

Yet...yet...to say they weren't liked is putting it mildly. The union of Lyons & Mankiewicz will be one that will live in infamy.

Lyons had this odd eagerness and enthusiasm, a chipper manner for almost any film that came his way. His reviews appeared to not come from a dispassionate analysis of whether whatever artistic goals it had were met. Rather, he seemed to like films he thought were "cool" or "funny". 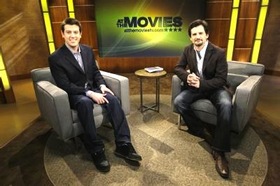 The best example of how this union between Lyons/Mankiewicz was really unholy can be summoned up by the review of Adam Sandler's Bedtime Stories, which Lyons called "a comedy the whole family can enjoy". He then spends the rest of the time describing the plot and how Bedtime Stories will be another successful Sandler comedy, but not about why the film was worth my time/money.

Mankiewicz, frankly, looked stunned. "I don't know where to begin," Mankiewicz starts, almost depressed about having to call out this tyke on his views. "You weren't right, I believe, about Any Single Point you made in this entire review....It wasn't funny, one time". He looked almost incensed that this kid could actually have thought Bedtime Stories was good (for full disclosure I have not seen it so I cannot say whom I would agree with).

Lyons' defense was "everyone was laughing, I was laughing" (which is a pretty weak defense, I might say), and "Mank" was becoming more agitated, even frustrated, at Lyons' cluelessness about how much Mankiewicz disliked both the film and (apparently) Lyons personally while Lyons just sits there, almost painfully oblivious to what contempt Mankiewicz has for him at that moment. "I thought it was a really heartwarming film. I really enjoyed it. I had a lot of fun", was Lyons' reply.

Watching it now, it's both painful and comical about how horridly mismatched Lyons and Mankiewicz are. The latter seems to have a frustration, a growing, growling sense that he's almost babysitting. 'How did I end up having to take care of a child?' he almost seems to be asking himself. Lyons appears delightfully cheery in how he approaches every film.

This marriage ain't gonna work. Yet, I digress.

Lyons had difficulty articulating a defense for his likes beyond just "liking" them. He also had a strange conflict of interest. E! Entertainment is built around pleasing the actors/stars they are dealing with. How could Lyons go from fawning over someone to being dispassionate about their work?

This isn't to let Mankiewicz off the hook. This is the man who recommended Beverly Hills Chihuahua. This time, it was Lyons' turn to be stunned. Mank, with his goatee and laid-back persona, attempted to be the hipster to Lyons' child (side note: was it wrong that I referred to the latter as "Baby Lyons" or "Cubby"?).

However, he also was wrong because his background didn't have film reviews either. It's one thing to introduce great films on the weekend, where his laid-back, relaxed atmosphere is adequate. It's another to discuss why a film works or not. Moreover, Fidel & I would snicker about how Mankiewicz would introduce himself as being from Turner Classic Movies, rather than from TMZ.

A more dispassionate view of the Lyons/Mankiewicz era shows that they weren't the clowns or imbeciles they were seen as. Some of their reviews were quite good, albeit not as detailed or deep as during the Siskel/Ebert or Ebert/Roeper era. However, At The Movies was becoming almost a parody of itself. Fidel especially hated the "Critic's Roundup" segment, where more critics were thrown into the mix to discuss one film. It took away from the combative nature between the two main reviewers, and so unnecessary. Neither of us could comprehend why this was being done.

I end this part by saying that I've not know two film reviewers who inspired as much hate as Ben Lyons and Ben Mankiewicz. I was shocked at the vitriol launched at them on YouTube. I think there was slightly less celebration when Baby Doc Duvalier was forced out of Haiti or when the Taliban fell from power than when Lyons and Mankiewicz were forced out.

I thought they were miscast, and frankly, neither of them are suffering--Lyons is still at E!, Mankiewicz at TCM. Don't cry for me, Argentina. Still, in the final analysis I doubt either Mankiewicz or Lyons will hold up their brief tenure at At The Movies as one of their shining moments. Come to think of it, perhaps the fact that they had steady, secure gigs at other channels made them less inclined to put their career/reputations on the line for At The Movies. Just a thought.

Alas, A. O. Scott and Michael Phillips were too little, too late to save At The Movies from final collapse. It was a bit like bringing in a new crew onto the Titanic. Yes, they were better critics because they had a background in film criticism, just like Siskel & Ebert in the beginning had. Yes, regular At The Movies viewers knew who they were because of their time filling in for Ebert or Roeper. However, too much damage had occurred due to the Bens Debacle for anyone to have rescued it.

As it stands, Scott & Phillips brought intelligence back to the show, but by this time, who was watching? There were, like us, a few holdouts, but overall it was doomed and nothing could have saved it.

In the end, I want to take this opportunity to mourn the end of At The Movies, but also to thank Gene Siskel, Roger Ebert, Richard Roeper, A.O. Scott, Michael Phillips, and even up to a point, Ben Lyons & Ben Mankiewicz. Thank you for sharing your love of films, for teaching us to look beyond what was on the screen, for sharing your passion for cinema and infecting us with it.

Thank you for showing us the beauty we can find in the dark.