Rooting For the Holmes Team...

Having now survived an intense Elementary episode in M., we now so to if not a lighter episode at least one that isn't as nerve-wracking, but it's hardly a light affair.  The Red Team I confess to having lost me in its story, particularly since it seemed to bear a bit of a resemblance to the Mel Gibson film Conspiracy Theory.   However, The Red Team has a good mixture of mystery, a bit of humor, and character development that makes up for my puzzlement.

Due to his actions with Sebastian Moran in M., Sherlock Holmes (Jonny Lee Miller) has been suspended as a consultant to the NYPD.  Holmes however, has other things to pass the time away: conspiracy theories and theorists.  Holmes isn't part of The Lone Gunmen.  Far from it: he has a mixture of contempt and bemusement towards them.  He tells Watson (Lucy Liu) that it was he who started the 'CIA created cocaine' business.  He has been in contact with a conspiracy theorist but who has yet to respond.  Sure enough, Holmes and Watson find him dead.

While Detective Bell (Jon Michael Hill) would rather keep Holmes out of this, Holmes basically gets his way and begins his own investigation.  The theorist had suspicions about "The Red Team", a group involved in war games to test the preparedness of the U.S. military.  The results are routinely published after the games, but one year was classified.  Holmes believes that perhaps in this case, the man was murdered because he was the man who knew too much.  Having found spyware in the dead man's home seems to solidify the reasoning.  Having found a turtle he takes that too, convinced it will make for a nice turtle soup.

While Captain Gregson (Aidan Quinn) won't have Holmes back, Watson does her best to bring the former friends together.  In any case, it's off to find what exactly the Red Team (the antagonists in the war games) found, and more important, who the members were.  One of them appears to be suffering from early-onset Alzheimer's Disease, but Watson's medical training suspects he was deliberately poisoned to have his mind rotted.  Going on the theory that the person who put the bugs in the conspiracy theorist's home will return, Holmes and Watson stakeout the house, and the bug is traced to a man who calls himself Bill.  Bill won't cop to being involved or even aware of 'the red team', but Holmes knows he's lying.

Eventually he, along with a highly reluctant yet still angry Gregson, Holmes gathers the rest of the 2009 Red Team still around: Walter McClenahan (Michael Laurence), Veena Mehta (Ann Sanders), Harold Dresden (Richard Benkins), and Sheldon Frost (Reese Madigan).  They all deny everything, but Mehta drops a clue.  Bill is really Army Captain Todd Clarke (Chris Sullivan), who was involved in the red team.  Unfortunately, he turns up dead and Holmes is briefly considered a suspect by the feds.

It's time to round out the Red Team for their own protection.  Frost won't be taken: he rigs a shotgun with salt rock.  Dresden has to bring his wife, who is suffering from ALS (Lou Gehrig's Disease).  Frost, out on the run, is found dead.  Holmes realizes who is the killer, just before Dresden is about to kill Mehta.  In the immediate aftermath, Dresden takes a cop and Mrs. Dresden hostage.

Dresden allows Holmes to enter.  He tells Sherlock that someone had approached him to reveal all in exchange for caring for his ill wife.  Fearing that eventually someone would crack and reveal the big plan that played out successfully, he began targeting the members of the Red Team.  Holmes reveals the plan of the Red Team to him and tells Dresden that should he die, it will be revealed.  Dresden gives himself up. 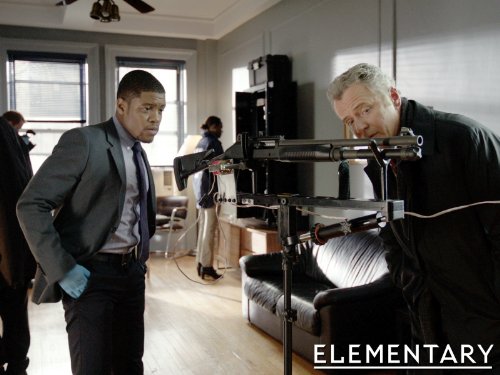 Holmes agrees to meet with Gregson at a bar.  Gregson in barely controlled anger rips into Sherlock for having put himself and the department in danger, and then welcomes him back to the NYPD after Gregson gets something off his chest...and with that Tobias Gregson punches Sherlock Holmes in the stomach.

The curious thing about The Red Team for myself is that this is the first time I write a review without benefit of my notes.  Using Holmes' mantra I have eliminated the impossible and determined that I must have thrown them out not realizing I hadn't reviewed the story.  Therefore, I work from memory.   From the moment The Red Team starts, we get the sense that the Jeffrey Paul King script (from a story by King and Craig Sweeney) will put a strong focus on the personal aftermath of M., and frankly the story itself was just dressing for the drama between Holmes and Gregson.

Truth be told I thought the story a bit convoluted, or perhaps I did not pay much attention to it.  All these threads of spies and a killer targeting this secret, shadowy group almost struck me as almost funny.  On that front, I can't express great enthusiasm.

On other fronts, I was much more impressed.  For example, on the board where Holmes is beginning to track down Moriarty, we see a picture of Napoleon, a nod to the Canon's declaration of the bad Professor as "the Napoleon of Crime".  It does appear that Elementary will be placing elements of The Canon within our CBS procedural.

Here I will digress slightly to say that it is in this that Elementary will differ from its contemporary/rival program Sherlock.   The latter appears to be updates of Canon stories, the former will introduce Canon elements but attempt to put them within the context of its own world.  STILL not having seen Sherlock, I cannot say which version is better, but Elementary now makes a strong case that it should not be compared with Sherlock in almost anything.

We also see a greater emphasis on the characters.  Clearly The Red Team has as its major subplot the effects of Holmes' actions on two people: Watson and Gregson.  Watson, despite her therapy visits, lies to herself when it comes to the joy and thrill she gets from working with Holmes on solving cases, and this issue (which has made her take sacrifices in money and deceiving Holmes, although I think it will be revealed that he knew all along his father hadn't approved her staying on) will play a larger role in future episodes.

However, the big show belongs to Gregson.  Quinn and Hill as Gregson and Bell do run the risk of being sidelined, but here Quinn in particular took a stronger stand.  Gregson is first and foremost a cop, a good cop, an honest cop, and he cannot work with someone who will be blinded by his own fury as Holmes was.  However, you get the sense that Gregson was more than horrified: he was genuinely hurt that Sherlock Holmes, someone whom he considered a friend (and he expects vice-versa), would not trust him to help him in his darkest hour.  Gregson got his own when he literally struck back at Holmes, but Quinn's performance makes it show that he takes no pleasure in both Holmes' actions or in Gregson's.

In short, I didn't care much for The Red Team's story, but the performances lift the episode.  And in case anyone was curious, Holmes opted out of turtle soup.  Perhaps Sherlock Holmes is slowly coming out of his own shell.

Next Story: The Deductionist
Posted by Rick at 9:09 PM