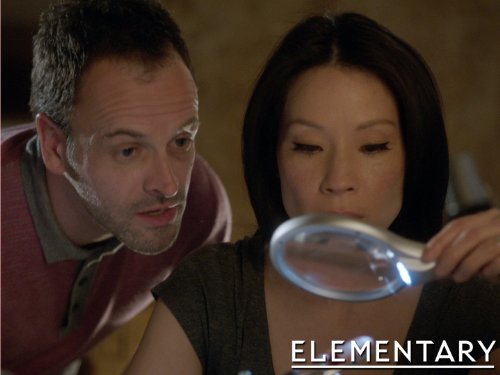 This Is a Drug-Free Holmes...

A Giant Gun, Filled With Drugs is an Elementary episode that doesn't have a murder in the middle of the case.  It actually involves a kidnapping and rescue of a young girl.  The subplot, however, is the more important story: whether Sherlock Holmes (Jonny Lee Miller), recovering drug addict, will find that he will fail his sobriety if under enough pressure, especially if it comes from a figure from his past.  The character's personal dilemma is at the heart of A Giant Gun, Filled With Drugs, and that raises the episode to one of the best so far this premiere season.

Holmes and his Sober Companion/investigative partner Joan Watson (Lucy Liu) have an unexpected houseguest.  It is Rhys (John Hannah), who happens to be Holmes' former drug dealer.  Watson is highly displeased to find Rhys there, fearing his mere presence will trigger a relapse.  This also couldn't have come at a worse time: Sherlock is finally speaking at support group meetings (although he talks about his past cases, but a step is a step).  Holmes, however, will not turn away an old friend, especially since Rhys' daughter Emily (Allie Gallirani) has been kidnapped.  Besides, Rhys is out of the business, having helped himself to money from the Dominican cartel he associated with.

It is this association that has led to Emily's abduction: the kidnappers want two million dollars for her safe return.  Holmes quickly establishes that the kidnappers are connected to a Dominican club, Club Hurikane (with a "K"), where Holmes threatens to expose a DEA Agent, Xande Diaz (Michael Irby) if necessary to get Emily back.

Rhys is at first strong during this crisis.  He tells Watson that he is not a wreck because he "believes in Sherlock Holmes".  However, he starts cracking, always hinting that Sherlock might work better with a little blow or a touch of the wacky tobaky.  Watson has already caught Rhys smoking a little something and made it clear she so much as sees or hears Rhys offering or bringing anything else within a borough of Holmes she will force him out.

Holmes, however, is working his way though the odd world of Twitter, and one of Emily's tweets leads to a possible clue.  Could her now-broke stepfather Derrick Hughes (Armand Schultz) have abducted her for the money?  Close but no cigar...no Dominican cigar.  We do, however, get a horrifying bit of proof: Emily's severed finger.

Just as Holmes is relentless in helping Rhys, Rhys is equally relentless in getting Holmes to rejoin the addict's circle, convinced that if he had a little stimulant Emily would be recovered faster.  In a fit of rage Sherlock Holmes makes it clear he will not go back to heroin.  In order to get rid of Rhys, Sherlock Holmes does something he has not done: call his father for help (in the form of ransom money).  Holmes is angry that A.) he's had to do this and B.) Rhys ultimately didn't trust him to solve the crime his own way.

However, at the appointed drop-off, a twist occurs.  The abductor is revealed, and is now holding Rhys and Watson prisoner.  The abductor had sent goons to kill Holmes to get the money, but now realizing the money is coming from Holmes and not Rhys, finds that his plan is going haywire.  Rhys, Watson, and Holmes all rise to the occasion and defeat the abductor, but now Holmes has made it clear to Rhys.  He is never to contact Sherlock Holmes again for any reason.  Fortunately, Emily IS indeed rescued and reunited with her father, and Sherlock Holmes appears to have taken a step to accepting his need for if not a Sober Companion, then perhaps a friend.

A Giant Gun, Filled With Drugs has two pluses: the fact that it didn't center around a murder and that the dramatic story of Holmes' addiction and recovery is at the heart of the story.  The central point of AGGFWD is about Holmes' temptation to reenter the world of drugs.  There are many triggers surrounding him: the call of his former friend, the pressure of mental stimulation not being enough to keep him away, the presentation of cocaine before him.  It almost seems that Rhys is goading Holmes to get back on drugs.  While Corrine Brinkerhoff and Liz Friedman's screenplay (from a story by Christopher Silber) goes a different route by making Rhys' pleas for Holmes to relapse almost a call for help in rescuing his daughter it does still appear rather repulsive to see him push Holmes into drugs.

What makes it even more disgusting is that Watson has made it clear she will not permit Rhys to put Holmes' sobriety in danger.  She is caught in a difficult situation: she cannot force Holmes to evict Rhys but she cannot let Rhys run roughshod over his issues.  It also comes at a particularly delicate time: while Holmes' rather self-centered and irrelevant story is not what a support group would need, the fact he spoke at all is already a giant step forward.  In short, Holmes' sobriety, which sometimes lies in the background of Elementary, now takes a firm step to the center.

Miller's performance is just brilliant.  He has those great moments of drama (when he rails against Rhys one is genuinely taken by surprise in his fury) but he also has a great sense of comedy (his mixture of perplexion and dismissal of this 'Twitter' thing) shows Miller has settled on making Sherlock Holmes both a highly intelligent being and also funny in his detachment from certain aspects of society.

John Hannah is a curious case in AGGFWD.  Americans tend to know him best as the comic relief from the Mummy movies, although he's done dramatic work on British television.  Here, we see Hannah give a full-range performance: the shady character from Holmes' past, the scared father, the almost heroic figure who takes one for a better cause.  Hannah did a wonderful job (even if his accent, perhaps Cockney, perhaps Scottish, perhaps Irish, made him once in a while hard to understand).

Liu is more than a match for Miller as the smart but caring Watson.  She in AGGFWD shows the most range with her character.  She is in turns frustrated, protective, defensive, and equally heroic.  Perhaps it is a bit cliched to have the woman use something to smash the villain's head in, it does allow for a little personal exploration of the characters and how they relate to each other.  Watson and Holmes now are friends, even colleagues, who now will work together splendidly.

We even get nice touches to The Canon, such as when Holmes discusses a previous Adventure of the Blue Carbuncle (might make for a good Christmas episode, no?), and Holmes' mention of his study of cigarette ash sounds as if it came from A Study in Scarlet (though I can't remember for sure).

A Giant Gun, Filled With Drugs is a well-acted story where we get a different crime to solve and deal with the temptations of Holmes' drug past.  I can't recall an Elementary episode where Sherlock Holmes' drug addiction has played such a key part.  We get a genuine twist (although it should be obvious, but it did take me by surprise), and some good humor courtesy of Twitter.  It so far has been a well-done season, and one that will be high...in score, that is.

Next Story: Details
Posted by Rick at 2:04 AM