Much controversy surrounds Zero Dark Thirty.  Is it a celebration or condemnation of enhanced interrogation techniques (or to use another word, torture)?  How accurate is it in its portrayal of the acts and actions over a decade to exterminate Osama bin Laden, head of Al-Qaeda, the organization responsible for the September 11th attacks on New York City/Washington, D.C., and various other actions pre-and-post 9/11?  These questions are not what I will focus on until the end.  I instead will focus on Zero Dark Thirty the film, what I saw on the screen (which is what any film really should be judged by).  ZDT is a methodical film, where one woman's solid, steady work, along with her determination to overcome obstacles and some fortunate turns brought about the fitting end to a man whose whole life was built around mass murder.

Maya (Jessica Chastain) has come from the CIA and in her time there has basically focused on one thing: capturing Osama (or Usama, as is sometimes spelled) bin Laden.  While the methods to extract information don't sit well with her, her fellow officer Dan (Jason Clarke) is less hesitant.  The detainee they've been working (on/over), Ammar (Reda Kateb), does reveal after the Khobar attacks in 2004 (of which he knows nothing of its failure or success) the existence of a courier, one Abu Ahmed (the courier's nom de guerre), who is in contact with bin Laden.  With this piece of information, Maya narrows her search for Abu Ahmed, convinced it will lead her to bin Laden himself.

Maya and her fellow operative Jessica (Jennifer Ehle), the closest thing she has to a friend in her Pakistan station, are not immune from attacks: both survived the Islamabad bombings, and in her enthusiasm for a potential source Jessica allows protocol to be dropped slightly, but the lead instead turns to suicide bombing, killing her while Maya, far away, learns second-hand the end of her fellow co-worker.  While she has survivor's guilt, this only solidifies her resolve.  "I'm going to smoke everyone in this operation and then I'm going to kill bin Laden," she says matter-of-factually.

With Dan's help (who now is in CIA headquarters in Langley), and very little to no help from Pakistan bureau chief Joseph Bradley (Kyle Chandler), she continues to search for Abu Ahmed, convinced that the claims that he is dead are wrong and that it is Ahmed's brother (who bears a striking resemblance) is the dead one.  Dan gets help from a Kuwaiti with influence to procure the courier's mother's number.  Eventually, he is tracked down to Pakistan. In Pakistan, there is an attack on Maya when machine gun-toting thugs shoot at her car.  While the bullet-proof windows and a quick reverse save her, the threats show that perhaps she is coming in closer.  The CIA eventually tracks Abu Ahmed al-Kuwaiti and tracks him coming and going into a compound in Abbottabad, Pakistan ('ironically' a few miles from Pakistan's version of West Point).  She forces the CIA to see things her way: Maya is 100% certain that UBL is indeed inside that compound (though she gives them a 99% chance because she knows how certainty freaks them out).

With that, the order is given: the compound will be raided.  Zero Dark Thirty then forces Maya on the base while Seal Team Six, which among the members are Justin (Chris Pratt) and Squad Leader Patrick (Joel Edgerton) enter the compound in pitch-black night or the Dark, Thirty minutes after midnight or Zero Hour (hence, Zero Dark Thirty).  The entire raid takes up the last thirty odd-minutes of the film, as thrilling and tense as anything we're likely to see without actually having been there.

The raid is over, and the body along with mountains of files and hard drives, are brought back to base.  Maya identifies the body as that of Osama or Usama bin Laden, and now with her mission finally over, she is taken aboard a cargo plane which has been ordered to take her anywhere she wishes to go.  Finally, Maya is left speechless, and she finally has her first tears as the film ends.

Perhaps this would be the best time to comment on the controversy over Zero Dark Thirty.  I can't speak for director Kathryn Bigelow or screenwriter Mark Boal, but having seen the film, I don't think they took a stand one way or the other on whether A.) the techniques used on the detainees was torture and/or B.) the techniques were useful in acquiring information that was beneficial to the overall search.  I took the film to state that such things happened, nothing more, nothing less.

Again, I speak only for myself and from what I saw.  The scenes with Ammar and with a few other captives are not a celebration of torture and anyone who thinks they are I would argue saw it through the prism of their own views on the subject.  Instead, ZDT presents us these scenes, says in essence 'it occurred thus and we leave it to you to decide based on your own morality and sense of ends justify means outlook whether it was right or wrong'.

Are they difficult to watch?  They can be, but given how most people don't look askance when watching people's heads blown up or bodies ripped apart in 'fantasy' films like Hansel & Gretel: Witch Hunters or don't give violent games like Halo or Gears of War a second thought I can't much be horrified when I see waterboarding.  It isn't something I would do or would want to go through but it is something that occurred.  Torture/enhanced interrogation techniques, however one wishes to call it, was not the dominant feature of ZDT.   For myself, I didn't celebrate watching it but if one sees the film, neither does Maya.  Rather, she accepts it as how things are done.

The most frightening thing about Zero Dark Thirty is that it leaves the questions and answers about the morality and/or effectiveness of the questioning methods up to us.  It will not give us easy answers. It might not even give us any answers.  It will not give us easy explanations, moral finger-pointing, or swelling music as the SEALs storm the compound.  What it does is what Maya does: take things slowly, methodically, clinically, presenting us its story and trusting us to come to our own conclusions. 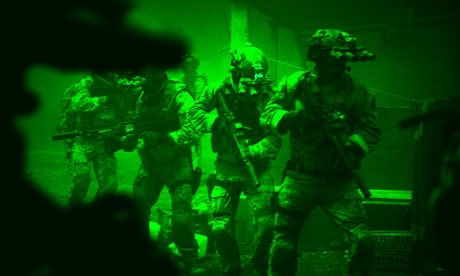 In terms of performances, Bigelow gets extraordinary work from her cast.  At the center of ZDT is Chastain's Maya, and ZDT solidifies Chastain's claims to being one of the best actresses working today.  In 2012 she was ubiquitous: apparently appearing in every film being released.  Here, Chastain's Maya is neither an emotionless thinking machine (her agony at the death of Jessica is powerful) nor an invincible superhero (the terror she has when she is shot at is equally powerful).  She is someone who is dedicated to her job, who will do it to the best of her ability, who has confidence in her abilities and will fight to complete her task despite obstinate opposition.

Clarke as the morally questionable Dan doesn't make him evil but like all humans complicated.  Anyone who doesn't shrink from waterboarding a detainee but misses the monkeys he kept on base could have come off as harsh.  Instead, we see Dan as someone who, like Maya, sees his activities as part of a greater job that needs to be done.  Ehle's smaller role as Jessica is also excellent: a woman who is a bit more cynical about Maya but who also genuinely likes her and whom we sense can bond with a fellow woman at work.  Their shared experience at being bombing survivors seems to solidify their 'friendship', so when we know (and we do know) that Jessica's overenthusiasm in regards to a possible lead will instead be deadly it makes the tension and sadness all the more hard to bear.

In regards to the smaller roles, such as Mark Strong's CIA office chief George, Mark Duplass' CIA operative Steve (and someone whom I still can't fully warm up to), and James Gandolfini's CIA head are all excellent.  With the SEAL members, it is a bit surprising to see Chris Pratt, who is best known for playing goofballs, in anything close to heroic or serious.  I'd say he is still a bit of a goofball, that wiseacre trooper who is good at his job but who also doesn't believe that they've found bin Laden (or that he was found by a woman).  Joel Edgerton, who can be more heroic on screen, is the more serious of the two: the yin to Pratt's yang.

Still, the final half-hour of Zero Dark Thirty when we are at the raid, are still quite intense and some of the best filmmaking of the year.  Alexandre Desplat's score fortunately does not intrude on the sequence (which in any other film it might have, and been excessively bombastic), and the decision to film it with large parts mirroring the green tint of night-goggle glasses only enhances the tension of the entire sequence.

There is no fist-pumping when bin Laden is taken down.  It is no surprise that we don't see his face or hear his voice, and his killing is not emphasized in the film.  We are so caught up in the raid that we almost fail to give bin Laden and his take-down any notice.

Zero Dark Thirty gives us things as they are, not as we'd like them to be.  It doesn't cheer on the destruction of a monster nor in the actions taken to bring justice to our enemies, to quote a former President.  The rightness or wrongness of the actions during this decade the film leaves for us to decide.  It will not take sides (contrary to what conservatives or liberals have said), and once we have decompressed what we've seen, Zero Dark Thirty leaves us as it leaves Maya: exhausted, relieved, and unsure of where to go.