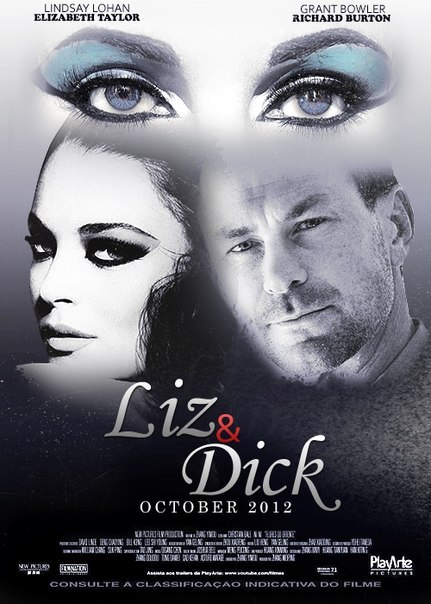 It's for certain that Richard Burton and Elizabeth Taylor would have hated Liz & Dick, the television biopic about their tumultuous marriages.  First, both Mr. Burton and Miss Taylor HATED the moniker "Liz & Dick".   Second, while they both were smart enough to realize that their lives weren't like everyone else's, they as people at least had some depth to them.  There was scant attention paid to that department in Liz & Dick, which treated two genuine talents as shallow, drunks and narcissists.  Third and so far last, Liz & Dick had such an unwieldy structure that it opens itself up to accusations that it was rushed into production to cash in so soon after Taylor's death.  Liz & Dick could have worked, but aside from the notorious nature of the actress playing Elizabeth Taylor the film has other aspects that make it flounder.

The film takes place it seems on the last day in the life of Richard Burton (Grant Bowler), August 5, 1984.  He is writing a letter to his former second and third wife, Elizabeth Taylor (Lindsay Lohan).  We then slip into a dark room for what appears to be a joint 'interview' between Taylor and Burton, where they talk about their stormy relationship.  In between this 'interview', we go through their lives together: the boozing, the buying, Burton's lingering bitterness over losing Oscar after Oscar, his relationship with his disapproving brother Ifor (David Hunt) and eventually their first and second divorces.  Liz & Dick circles back to Burton's death, which causes Taylor to faint.  When visiting his grave some time later, she bids him farewell...

For all the hoopla and complaining people have thrown at Lindsay Lohan's performance as Elizabeth Taylor (and we'll get to that in a moment), I find the actual structure of Liz & Dick to be among its greatest flaws.  If I understand Christopher Monger's screenplay, this 'interview' is taking place inside Burton's head.  The segway from Burton's bedroom to Taylor and Burton on an empty set, conversing as they would to a reporter (or perhaps us) suggests as much.  However, would these two people whose lives were so public go out of their way to explain so much to us when they also weren't too thrilled that they were allowed no virtual breathing room?

Also, several times it seemed like Taylor and Burton were consciously putting on a show.  The ease in which they convince Who's Afraid of Virginia Woolf? screenwriter Ernest Lehman (David Eigenberg) that they can slip into vicious verbal fights almost makes it look like they weren't "the Battling Burtons" but actually quite fond of each other and willing to play up to their public image almost for kicks.

It also reduces their extraordinary body of work (like Virginia Woolf and The Taming of the Shrew) to mere footnotes between screwing and boozing.  We don't ever get to see what made them either great actors (which they were) or fascinating to the public.   At what is suppose to be a screening for Virginia Woolf (where we see Lohan and Bowler recreate scenes from the film) Burton and Taylor are seen arguing when a fan compliments Taylor but doesn't appear to even notice Burton who is seated between them.  Since we've already seen "the Battling Burtons" pretend to fight with each other with the greatest of ease, how can we think that this argument is genuine?

Whatever love or passion Burton and Taylor had for each other, whatever consuming fascination they created just didn't come through in Liz & Dick.  There was nothing about the Burton/Taylor affair and romance in Liz & Dick that made one really care all that much about them.

If it is to be believed, Taylor was an insecure boor and Burton forever whining about losing the Oscar to the likes of Lee Marvin (in Cat Ballou over Burton's The Spy Who Came in From the Cold...admittedly an odd choice) or Paul Scofield (in A Man For All Seasons over Burton's Who's Afraid of Virginia Woolf?).

Let's look over the leads.  Grant Bowler is an actor I think well of, and he did what he could as Burton.  He was there to give a performance, and while it is difficult to copy exactly Burton's rich voice he was strong as the Welsh boy who bore insecurity that he drowned in drink.

As for LiLo, or La Lohan, or An Embarrasment to Western Civilization, Lohan was not convincing as Taylor.  She did her best we'll grant you, but sometimes she was so stiff one couldn't believe there was a genuine attempt at acting.  "I'm bored!  I'm so bored!" Lohan as Taylor shouts, but it sounds as if Lohan is referring to herself not as Taylor.  The scenes between Lohan and Bowler on what is suppose to be the beginning of their great affair on Cleopatra show Lohan was bad at trying to play TWO characters simultaneously: as Taylor playing Cleo, the Nympho of the Nile.

Actually, every time they are called to recreate scenes from their films, Lohan looks forced, especially compared to Bowler's more natural performance.  One that sticks out is when they are recreating The V.I.P.s,  and they begin fighting.  It seems strange that the arguments don't appear natural or realistic.  It almost is cartoonish, and Lohan is the worst of the two.

That isn't to say she was all bad.  Somehow, she wasn't too dreadful when recreating Martha in Who's Afraid of Virginia Woolf?, and I'll leave it to you as to any suggestion that Lohan can play a boozer.  Finally, having moments that echo other films (such as Butterfield 8, as we see above) play out in 'real life' might be clever to the production's mind, but it's actually distracting.

Liz & Dick has a rushed feel to it, and it never captures what was one of the most spectacular, passionate, shocking, brazen, and legendary love stories of the Twentieth Century.  It does sadly reduce them to silly figures, and even by made-for-television standards it does come off looking a bit cheap.  Grant Bowler comes off looking better because he went into this and gave a performance.  Lindsay Lohan might have come into it thinking that because both she and Taylor started young in show-business they had a common bond.  Only difference is that Taylor found depth in her life (her children, her AIDS work, her great performances in film), while Lohan hasn't.

It's not good, and a disservice to an extraordinary passion story and two great actors and their legacy.