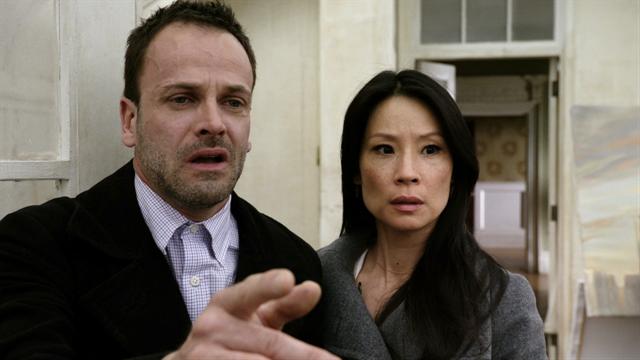 Cracks in the Holmes Structure....

Normally, one leaves shocking twists for the end of a season/series, but Elementary gave up what is perhaps the most stunning turn in its penultimate episode.  In fact, Risk Management had a whole slew of twists to our characters, if not the actual story.  As the debut Elementary season gears up to close an impressive first year, I do wonder whether it is throwing a bit too much at us and the duo of Sherlock Holmes (Jonny Lee Miller) and Doctor Joan Watson (Lucy Liu).

Picking up right where we left off in A Landmark Story (which was pretty good for basically being the prequel to Risk Management), the voice of Moriarty now makes a strange request.  In exchange for giving Holmes information about Irene Adler, Moriarty asks Holmes to investigate the murder of a seemingly insignificant figure. It is a Brooklyn mechanic named Wallace Rourke, and one wonders why anyone, let alone a master criminal like Moriarty would care. In any case, in exchange for information about Irene Adler, Moriarty insists Holmes investigate.

His investigation quickly leads him to believe that Rourke was not killed by some random mugger but that he was deliberately targeted.  A cell phone Watson finds among Rourke's things leads them to Sutter Risk Management and the owners, Daren Sutter (J.C. McKenzie) and his wife Kay (Francie Swift).  After a brief interview and a glance at Daren's book, Friend or Foe: Assessing the Risks of Everyday Life, Holmes discovers that Daren believed Rourke murdered Daren's sister twenty years ago.

Even after Daren confesses to the murder, Moriarty is not satisfied.  He tells Holmes he still hasn't really solved the crime and thus he won't give the information.  Holmes digs deeper and finds that Daren contrary to what he's maintained all these years didn't actually see his sister's killer.  Instead, it was his now-wife who saw the man.  Now, why would Daren lie and say he had been the witness?  It was because Kay and Daren were having an affair at the time of the murder, and she couldn't reveal what she knew without revealing that she was cheating on her then-husband.

With the Sutter's business and lives now in ruins, Moriarty sends a text message with an address to Holmes.  Watson, who by now has learned how her mentor operates, had Holmes' phone tracked and meets him at the house.  There, as they wander around, Sherlock Holmes makes the most astonishing discovery of his life...painting quietly is none other than Irene Adler, very much alive.... 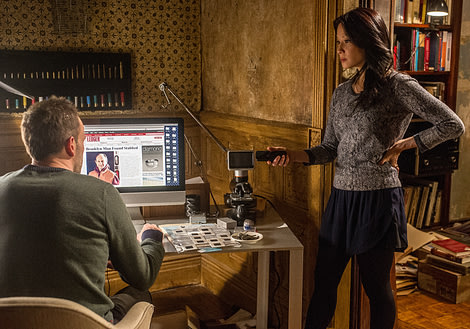 Risk Management has all the trappings of a standard Elementary episode: a crime, the 'right person' in prison, a twist, and then a discovery with some character development thrown in there.  As we barrel down to the season finale, we have to be given a lot of twists and turns to keep our attention.  Liz Friedman's screenplay (from a story by Friedman and Elementary creator Robert Doherty) did just that (the final revelation of "The Woman" is enough to give us a jolt).

In terms of character development, it is Lucy Liu's Joan Watson that has become a personal favorite (and one that outshines the idiot Watson of Nigel Bruce and gives Jude Law a good run for his money...undecided on Martin Freeman).  She also has become her own woman, fully aware of the risks (no pun intended...at least from this point) that come with working alongside Holmes.  Captain Gregson (Aidan Quinn) tries in his own gentle way to dissuade her from keeping the company of this brilliant but self-centered individual.  When she dismisses his concerns by pointing out he too runs risks, he says, "I've been a cop for 30 years.  I carry a gun."  To which Watson snaps, "And a penis," suspecting sexism in his concern.

This is one of the things I like about both Liu and Joan Watson: she faces the extra hurdle of being a woman in a man's world, with the suggestion of either weakness or romance (something that no other Watson save perhaps Freeman has faced or faces).  However, she has grown as a character, from someone smart but not as clever as Holmes to someone who can more than keep up.  She, however, has something Holmes rarely shows: a heart.  At the end of Risk Management, we see that Watson is able to stay ahead of Holmes, fully aware of what kind of person he is by being able to 'think' like him.  However, when she comes face-to-face with 'the woman', she also shows something that Holmes is unable to do: show genuine concern for someone who has had the greatest shock of his life.

I personally thought Miller's performance at the end was brilliant, the mix of heartbreak and joy, agony and ecstasy as he sees the woman he loved and thought dead now brought to life.  In the rest of Risk Management he still has the same curt and dismissive manner he's maintained throughout the series.  When Watson says that once they learn the name of the person who contracted the Sutters to keep tabs on Rourke we'll have the killer, Holmes tells her he already has it.  "First name Made.  Second name Up," he says.

In terms of the crime, it isn't the greatest, but I'm willing to forgive it because I feel that it is a precursor to an introduction to one of the legendary creations of the Canon, who appeared in only ONE story (A Scandal in Bohemia) but who, as one of the few women to both outsmart and intrigue the Great Detective, has taken on a life of her own, with her own spin-off non-Canonical stories and continued involvement in Sherlock Holmes' life (in and out of the boudoir).  Outside of The Canon, Irene Adler has become "The Woman" to Holmesians as well: a figure of fascination, intrigue, and even romance.

One hopes Irene will lead us down fascinating roads...

My conundrum is whether to count the two-part season finale as TWO episodes or one.  I'll decide after watching.

Post Script: After watching, given that it was listed as Part 1 and Part 2, I've opted for one review of a two-part story that concludes Elementary's premiere season.

Next Story: The Woman/Heroine
Posted by Rick at 8:02 PM