We now begin the third season of Franklin & Bash, the story of two lifelong friends who grew up to be lawyers but in every other way just didn't grow up (and again, that wasn't a Breckin Meyer short joke).  The first season (or what I remember of it) was sharp, clever, amusing, and had some heart to it.  The second season was a nightmare of egoism, of two dimwitted man-whores bumbling their way to success while regressing even more into permanent childhood.

The first season, I saw the characters of Jared Franklin (Breckin Meyer) and Peter Bash (Mark-Paul Gosselaar) trying to be antiestablishment while also navigating a growth to adulthood.  The second season I saw them turn into self-absorbed jerks, skipping staff meetings and going into court unprepared but still somehow becoming full-fledged partners and winning their cases (though usually someone else, either their associates Carmen and Pindar or other attorneys at Stanton Infeld stepping in to save them...and in return, Franklin & Bash hardly ever bothered to acknowledge the work others did for them).  Their selfishness and egos were so great that despite having been at Stanton Infeld all this time they never invited anyone from the firm to one of their legendary parties (unless they were hot interns) until Franklin & Bash somehow managed to save the firm...from Jared's own father!  To me, this signaled less a "we are against The Man" mindset and more"'we're in our own bubble and don't see a need to associate with people we work with" mindset.

Therefore, which version of Jared and Peter would we get in Coffee and Cream, the season premiere of Franklin & Bash?  Would we get the maturing Jared and Peter, or the men-sluts Jared and Peter?  The indicators appear to be pointing towards the latter, but being early in the season, perhaps some new blood can turn things around.

Jared and Peter have a theft case, where magician August West (Adam Goldberg) is accused of stealing a valuable bracelet when performing a magic act.  Jared, who insists he's a magician despite any real talent or presentation of such powers, is geeked out by representing someone who performed an incredible act where he would be drinking coffee in one location, then appearing somewhere else because he needed cream (hence, Coffee & Cream).  The trick is quite easy: August has a twin, Tim (Goldberg again), and it was Tim who performed in August's place and who stole the bracelet.  However, August won't reveal that he has a twin because it could hurt his career, so he'd rather take the fall.

Meanwhile, the firm of Stanton Infeld now is Stanton Infeld and King, with the addition of a new partner, Rachel King (Heather Locklear).  This doesn't sit well with Infeld's nephew/Franklin & Bash's nemesis Damien Karp (Reed Diamond) who sees he'll never take over the firm, or with our boys, who were publicly humiliated by King on Piers Morgan Live (where having lost a bet with her, they had to appear nude on television).


King wants them to make a deal, and soon she goes over them and does it for them.  Franklin & Bash don't want to admit defeat (or do as they are told), so they decide to find Tim and get him to work out his differences with his brother and more importantly return the bracelet after their legal strategy of convincing the jury that the victim had agreed to the theft bombed.

Karp has his own problems: that videotape of his masturbating continues to haunt his desires to be a judge.  King gives him the suggestion that he ought to leak it himself (there's a pun somewhere in there) so as to have less of an impact in a future election.  Reluctantly he does so, which makes him a hero of sorts to the Southern California Serial Masturbators Society.  With a little investigative work from Carmen (Dana Davis), we find Tim, his criminal past, and a twist that both gets the case resolved and circumvents King's decree that neither Jared or Peter speak with 'her' client August.  In the end, they win their case, the brothers decide to join forces in a double-act, and the panophobic Pindar (Kumail Nanjiani) overreacts to termites by first forcing everyone to not enter the house due to his paranoid fumigation, then by accidentally burning down the house. 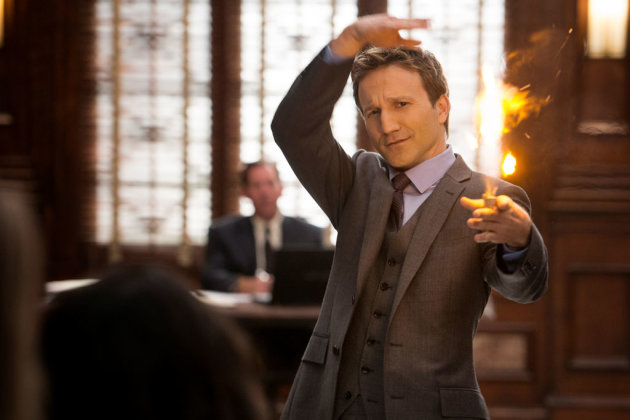 Coffee and Cream is a boring episode, and at times nonsensical.  Let's go over some things that don't make sense.  It doesn't make sense that these two highly cocky guys would be so stiff and paranoid on television.  Far from it: their egos would relish the idea of being seen around the world.  However, by again showing them to be a couple of doofuses (such as when they cannot name a single case that would support their argument against a more polished attorney) we have to ask how they managed to graduate high school, let alone law school.  You can't be good lawyers if you don't know the law.

Another thing that doesn't make sense is their strategy, which can summed up as, 'blame the victim'.  I'm not a trained attorney, but I would have argued that there was an implied agreement between magician and volunteer that he would not be allowed to keep her expensive property.  The fact that they were somehow unaware of the hotel's contract which stipulated the magician would return all property only makes them wildly inept.

When Pindar unilaterally fumigates the house, Franklin & Bash are forced to sleep in their office.  I wondered why, being rather wealthy, they just didn't get a room (which given the silent homoerotic nature of their relationship, has more than poetry in the phrasing).

Infeld, who was always an oddball, now is veering towards wimp territory by letting King roll over everyone.  While it is nice to see that Franklin & Bash have to be subservient to someone, especially a woman, it does make one wonder why their boss appears so willing to bring in someone who had so publicly embarrassed the firm or not bothered to discuss this with anyone.

Finally, the entire plot collapses if one examines it.  The whole point of August not wanting Tim's identity to be exposed (no pun intended) is to protect his rep, but at the end he decides to have a brother's act (which would reveal Tim's identity)?  It does seem rather idiotic for August to say at the beginning 'I don't want people to know about my twin' (already a hackneyed idea) only to end up saying 'I'm telling the world about my twin'.

Speaking of August/Tim, Goldberg looked either bored or stoned throughout the episode.  Goldberg went the 'mumblecore' method of acting, where with a dull expression and barely-moving the mouth delivery was suppose to express so much.

You can see how boring and unimaginative everything is just by the Twitter handles of Franklin, Bash, and King.  They are as follows: BashPeter1, FranklinJared1, and KingRachel1.  While Franklin and Bash having similarly-written handles is a possibility (given just how bizarrely, even psychotically close they are), whatever are the odds that Rachel King would have a similarly-written handle.

I'm also finding Pindar more annoying in his phobias and general behavior.  It is as if he is regressing (which everyone is really, but that's neither here nor there).  A little part of me wished he'd burned with the house (and oddly, the boys don't appear all that bothered that someone burned down their home/whorehouse).

There are a few good things in Coffee & Cream.  Heather Locklear is so effective as the new partner, not being overbearing but being an ocean of sanity within the nutfarm that is Stanton Infeld.  (I do wonder if bringing in Locklear is a sign of desperation...isn't the introduction of a new character a sign that people are running out of ideas?). Reed, who's got the flustered nemesis down pat, has a great line when he first sees Jared and Peter after the disastrous (and irrational) Piers Morgan appearance when they see Rachel King with Stanton Infeld.  "It's the mop who wiped the floor with your naked asses last week," he sneers.  Seeing Jared's little-boy fixation on magic (not a Meyer short joke), down to his constant efforts to summon "the flame of Zeus" is amusing, right down to Franklin's declaration that "Harry Potter was based on me" (although Harry was not a magician but a wizard).  Little technicality there.

However, on the whole I found Coffee & Cream to be a sludge.  Franklin and Bash are stupid men who haven't grown up, the twin story boring (and Goldberg looking more bored than anyone else), and while King and some good lifted it up I found the whole experience almost sad.

Next episode: Dead and Alive