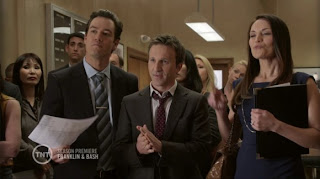 The Boys Get A New Playhouse...

I'm not convinced that Dead and Alive, the second hour of the two-hour Franklin & Bash season three opener, is a Part II of a two-part story.  It isn't connected to the previous story or case, and minus new regular star Heather Locklear (and finding our fellows new digs), there is no continuation of Coffee & Cream to Dead and Alive. Therefore, I've decided to give it a separate review.

As we know from Coffee & Cream, Pindar (Kumail Nanjiani), the panophobic assistant to Jared Franklin (Breckin Meyer) and Peter Bash (Mark-Paul Gosselaar) had burned down the bachelor pad after having the place fumigated.  As such, we need to find a place for them to live.  Stanton Infeld (Malcolm McDowell) steps in, offering his beach house with what he calls 'a reasonable lease' (which I suspect is zero down, zero monthly payments).  Jared and Peter are oh so thrilled to be living right next to the beach...so many women in bikinis to feast on.

Infeld, however, has his own concerns.  We learn that while in Africa, a mysterious man gave him advise about listening more...before throwing himself into the Victoria Falls.  Following his advise, Infeld is now listening to Nataliya (Ana Alexander), a Ukrainian who has recently lost her job at a fast-food place and risks deportation.  Infeld's nephew Damien Karp (Reed Diamond) naturally assumes Nataliya is a stripper, but soon is corrected.  She was going to school and according to Infeld, wished to open "an art house theater, featuring Jerry Maguire and 27 Dresses."  Bimbo status established, Karp begins to wonder whether his usually eccentric uncle has now crossed over into flat-out insane.

As for Jared and Peter, their case involves Don, a Vietnam veteran who served with Peter's father.  He was declared dead and thus lost his home when the bank called in his mortgage.  He and his nephew are fighting to get his house back, and at first Franklin & Bash think it's an easy matter of just buying the house back at auction and turning it over to Don.  However, whatever are the odds of someone else offering an opening bid that matched exactly Franklin & Bash's maximum bid of $10,000?  This is bad because this means that Jared and Peter are going to have to do something they just aren't used to doing...work.

As it turns out, the house was bought by a major developer and there might be a connection between the realtor and the Social Security officer involved in Don's case.  Things appear to look up for the judge in this strange case (Robert Wuhl) is a rarity among judges: he is a fan of Franklin & Bash's antics.  At first the boys try to charge the developers with wrongful death, but the fact that Don's nephew cashed death benefit checks to tie his uncle over complicates matters: either the nephew acknowledges his uncle is dead or he knowingly committed fraud.

Finally, they use this to their advantage: "John Doe" (aka Don) is allowed to testify as a witness to Don's "death".  That and the discovery of the Social Security/realtor connection wins Don both his house and his identity.

In the Infeld storyline, he decides the best thing for Nataliya is to get married and thus establish citizenship.   Karp is horrified but by this time he is so used to his oddball behavior he just goes along with it.  Thanks to Franklin's brief tenure as a judge he has the authority to marry them, but Nataliya opts at the last minute to not marry and face the music: Infeld is just too good a man to allow himself to enter a marriage under false pretenses.

Things are going well for Bash as well.  Charlie, a hot Australian physical therapist, lives next door.  At first Bash bombs in his efforts to win her over with his charms and body, but eventually she starts warming up to him.

In terms of the actual plot, Dead and Alive is better than the first part of the two-hour season premiere.  The twists of having to prove that a man is still alive despite government declarations otherwise is interesting.  Other than that, I am growing disillusioned with Franklin & Bash, for what was once in my view a witty program that didn't take itself too seriously is now turning into a celebration of Peter Pan syndrome.

Again we're being asked to believe that these two guys find doing anything legal is almost unnatural.  How they never think that their brilliant strategies can be outmatched always makes it look that these two, other than being brilliant attorneys, are really a pair of bumblers who somehow stumble onto a successful resolution to their cases.

There are other aspects that are pretty weak if not downright stupid.  Infeld has always been a bit odd, even nutty, but his actions of knowingly entering a false marriage I think is criminal.  Karp would therefore be an accessory to committing fraud against the United States.  While I liked Alexander's Nataliya (who was sweet and genuinely unaware that her aspirations are bizarre), the joke about the 'art-house films Jerry Maguire and 27 Dresses' is just not funny.

There are still moments when we not only question Infeld's sanity, but I would question Jared and Peter's.  Throughout the episode, Jared is still a jerk to almost everyone (mocking witnesses, constantly rubbing it in to Pindar that he burned down their house), and appears to almost relish the idea that Peter, obviously in the midst of a prescription drug-induced stupor, is completely unaware of what is going on.  A rational person would have said he was just staying home, and he would not have allowed pride to get in the way of treating a pulled muscle after moving a large and ancient figure.

Actually, a rational person would have told Pindar to simply get over his irrational fear of this Chinese dragon figure which didn't even belong to him and live with it rather than move it to where he couldn't see it.  It strikes me as terribly ungrateful of Pindar to complain about the décor of Infeld's beach house when he is staying there virtually rent-free.  I wonder if Bash and Franklin (up to a point) are coddling Pindar's various neuroses rather than help him function.

In its efforts to be funny, I found the stabs at humor almost cruel.

Curiously, Dead and Alive has one of the most suggestive homoerotic subtext in the series' history.  The bromance between Jared and Peter has always been part of the fun of Franklin & Bash, but in the ensuing years the emotional attachment between them suggests that at least from one side, there is a suppressed desire for the other.  It may not be sexual per se, but there are odd suggestions that Jared may see that Jared does not see a future where he and Peter do not live together.

Last season, while Peter was bouncing two girlfriends (his ex-girlfriend Janie and Officer Cowell), Jared didn't get a girl until the end of the season (who is now gone, whether for good or just to her New York job).  In one episode, Jared had no problem interrupting Peter's efforts to getting laid, and in Dead and Alive, we have this rather curious exchange:

Peter: I'd like to die first.
Jared: Who'd do all the shopping?  You're the best cook.  No, it should be me.
Peter: I meant die before my wife.
Jared (hesitantly and sheepishly): So did I.

From this brief conversation it sounds as if Jared imagines that Peter will never leave his side, that no woman will ever come between them, and that Jared considers Franklin and Bash a sort of couple.  In fact, while so far definitely Peter and most likely Jared are heterosexual, their wild man-whorish qualities are bordering on Barney Stinson-like.  The fact that Neil Patrick Harris in How I Met Your Mother plays Barney as almost a parody of the shameless womanizer does not help matters.  Harris plays Stinson close to a spoofing of the player, but Franklin and especially Bash are playing them straight (no pun intended).  Here again, one wonders if Charlie will be a major part of Franklin & Bash's third season, and if so, how will Jared react to finding himself squeezed out of the relationship?

Will Jared Franklin finally come out and tell his best friend that is actually in love with him?

As a side note, when Franklin is about to marry Infeld and Nataliya, Breckin Meyer looks so tiny compared to everyone else.

The case is interesting and well-handled, and Charlie starts out as a rational character.  When she spurns Bash's smooth efforts at seduction, the subtext of fishing explains so much.  She turns Peter down and cuts the line, then tells him why she let the fish she'd caught get away, "Lucky escape.  Big, dumb, bit of a bottom feeder."  She then answers his question as to when he had lost her, she smiles and says, "When I saw you doing push-ups" (which he had done just before to build up his impressive chest).

However, like all women Franklin & Bash deal with, by the end of the episode she starts warming to their charms.  All the women the boys meet, save for Carmen and Heather Locklear's Rachel King, appear to go all weak in the knees for them, and are almost pathologically stupid.

Besides the case, Dead and Alive is more like (almost) dead on arrival.

Next Episode: Good Lovin'
Posted by Rick at 6:18 AM