Murder is the Name of the Game...

Sleuth shows its theatrical roots in that there are only two characters (more or less) in the entire film.  Given the film is over two hours, would they be able to pull it off?  While Sleuth starts a bit slowly, by the end the wild twists and turns in it make it highly compelling viewing.  One soon is drawn into this double-act by two extraordinary actors, holding us at full attention with only a brilliant adaptation and their individual talent at their disposal.

Mystery writer Andrew Wyke (Laurence Olivier) invites Milo Tindle (Michael Caine) to his country estate.  Andrew and Milo are connected: Milo is Andrew's wife's lover.  A hairdresser by profession, this half-Italian son of a working-class watch repairman has, in the aristocratic Wyke's view, moved above his station.  Wyke has nothing but contempt for Milo, but he appears willing to let his wife go to him (the fact that Wyke has a mistress helps ease the pain).  However, Wyke warns Milo that the wife has grown accustomed to the good life, so a man of Milo's means may not hold her for long.  He makes Milo an offer he can't refuse: fake a robbery of the jewels, hock them to a friendly fence of Wyke's, and keep the money (while Wyke keeps the insurance money).  After some hesitation, Milo eagerly agrees, going so far as to don a clown outfit as part of an elaborate disguise.

However, at this point we get the first of many twists that leave the audience constantly wondering about what happened and what will happen?  WAS there a murder?  WHO was murdered (if there WAS a murder)?  Inspector Doppler (Alec Cawthorne) and Wyke match wits, with still more twists and turns leading to a super-surprise conclusion. 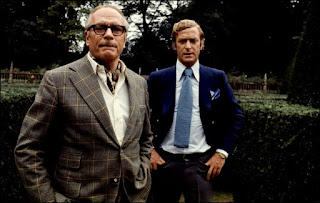 Already in my summation of Sleuth I too have played a trick on the reader.  To give an actual and accurate description would be to give away far too much.  Normally, on the issue of 'spoilers', I try to either observe the silence or give warning, but with Sleuth there is simply too much within it to reveal more of the story.

What can be said is that the film is dominated by two brilliant performances by two brilliant actors.  Olivier was the haughty upper-class Wyke, a man thoroughly convinced by his own brilliance and superiority over everyone, especially over the 'dago wop' Milo.  In turns enthusiastic, prickly, and frightened, Olivier astounds the viewer with his mastery of his performance.

Caine is more than a match for Olivier as the younger man.  He goes through all the emotions: casual flippancy, anger, fear.  His confrontation with Wyke when it looks like the older man has the upper hand makes you sympathize and fear for him, but Milo is also able to turn the tables on Wyke, showing he is just as capable of playing Wyke's game.

Anthony Shaffer, adapting his play, makes the twists and turns in Sleuth logical (always a high point for me).  He keeps us guessing as to who is who, what is what.  The story matches the opening scene where Milo is wandering a labyrinth garden while we hear Wyke reciting the plot of his latest mystery novel starring his aristocratic detective.

Sleuth is also filled with witty dialogue between Milo and Wyke.  Commenting on how far the half-Italian Milo has risen, up to living in a Georgian-era house, Wyke quips, "From Genoa to Georgian in a single generation."  At a critical point in Sleuth, when it looks like murder is the actual objective, we hear this line, "Property's always been more highly regarded than people."  When Inspector Doppler asks Wyke about how a divorce would cost much, Wyke responds, "Sex is the game.  Marriage is the penalty."

As a side note, either Wyke or Doppler make a comment about a "jumped up pantry boy who doesn't know his place."  It might just be me, but this line is also heard in The Smiths' song This Charming Man.  I do wonder whether Morrissey or Johnny Marr saw Sleuth and opted to take this line for their song, but it did strike me curious.

Sleuth is not just a detective film, but a sharp social satire on the arrogance of the aristocracy and the ascendancy of the working class to middle class respectability.  Throughout the film the old-school snob Wyke has to match wits with those whom he would look down on.

This was Joseph L. Mankiewicz's final film, and he couldn't have ended his career with a better project.  He kept things going in a firm, thrilling manner (even though I found the beginning a trifle slow).  Mankiewicz brought a sense of tension whenever one or the other character faces some kind of threat and keeps our attention until the last moment, when we get one last twist that appears just and right.

Sleuth has wit, humor, extraordinary acting, and a riveting story.  There is a great joy in seeing two great actors play against each other, using words and their wits as weapons against each other.  Sleuth, after a bit of a slow start, throws so much at you one marvels at how a movie with a very small cast can keep one in rapt attention.