Franklin & Bash: By the Numbers Review

FRANKLIN & BASH: BY THE NUMBERS

Actuary, It Stinks and Stings...

By The Numbers I think might have made for a good episode, but somewhere along the way it got sidetracked by how fun and cute and clever it was all suppose to be, and instead we got what has become typical Franklin & Bash fare.  We get to humiliate a character who has no need to be humiliated,  we see that our two leads are basically incompetent but can stumble into success and be rewarded for it, and we get people who are remarkably shallow, even horrid.

Perhaps all that could be forgiven, but not the fact that By The Numbers turns out to be, well, almost boring.

Wendell Singletary (Martin Starr) is an actuary (a person qualified to calculate commercial risks and probabilities involving uncertain future events, especially in such contexts as life assurance...yes, I had to look it up).  He is being sued by Noelle Gardener (Meg Cionni) because he refuses to pay her for not dying.  Noelle had a terminal illness and Wendell bought her life insurance, with which she could live out her remaining days with some income and at her death he is the beneficiary (or something like that: I confess to finding the whole thing rather morbid & perplexing).  As can be expected in these types of odd cases, Jared Franklin (Breckin Meyer) and Peter Bash (Mark-Paul Gosselaar) are for Noelle.

Funny thing happens on the way to the jury: Noelle drops dead.  And guess who is the main suspect?  And further guess who has been appointed by Stanton Infeld King head Rachel King (Heather Locklear) to defend our numbers man?  Wendell (who has this strange hold over women that he is almost always oblivious about) has mounting evidence against him, and not even his trusted assistant Jill (Heather Tuck) can help him.

Meanwhile, Damien Karp (Reed Diamond) is asked by Rachel to defend Summer (Kim Shaw), a beekeeper for reasons only Rachel understands.  Summer lives in Venice, as hippie-dippy a town as can be found in California (and this is the same state that has San Francisco to contend with).  This of course means that Venice is the perfect fit for the buttoned-up Karp.  After failing to settle the matter quickly (who knew there was video of the birthday party where the children might have gotten stings from Summer's bees?) Karp's uncle Stanton Infeld (Malcolm McDowell) jumps in.

Well, we do learn that Noelle was murdered, but who could have known that she had an allergy to bananas?  Her sister Rayanne perhaps, certainly her ex-lover Wendell, but there just might be someone else.  We also learn that King, desperate to win the bee case because Summer is a member of a private school board where her goddaughter wants to go, has to turn to Franklin & Bash for help.  Could they help show Karp the Franklin & Bash?  A chance to embarrass their nemesis?  What to you think?

Despite themselves, both pairs win their cases.  In a subplot, Peter's new squeeze Charlie (Nicky Whelan) starts falling for Bash (no surprise there).  However, she comes with a bit of baggage: a 9-year-old daughter named Tess.  This does disrupt Peter's rampant sexual thinking (a child? you mean sex can result in people?) but fortunately for us and them, we never have to deal with Tess (she, like Kumail Nanjiani's Pindar, is mercifully off-screen for the duration of By the Numbers).

I know Karp is set up to be made the fall guy to embarrassing situations, but even by the standards of Franklin & Bash, having him surrounded by bees is wrong on two levels.   First, it seems in Jamie Pachino's screenplay almost cruel to put someone through this scenario.  Second, I just don't understand why King would give such a simple and bizarre case to Karp (who by all impressions is the most sensible and efficient of the lawyers at the firm) but give the murder case to Franklin & Bash (whose antics I'm surprised have never alienated a jury).  Karp himself expresses very subtle anger at how those he detests have a murder case while he's being sent to a nutty town to defend a beekeeper.  My admiration for Reed just grows and grows, primarily because for good or bad I am starting to identify more with Karp than with either Jared or Peter.

Also, as a side note, again we see how all these lawyers really are above and beyond dumb.  The issue of the videotape of the child's birthday party where the bees are alleged to have wandered into was unknown to any of them, so in fairness to Karp he could not have resolved something of which he knew nothing of.  It's become a F&B routine to keep Karp in the Dark, but in this case it was to put him in the middle of a bee swarm.  Something about all that just strikes me as unfair and unfunny, almost cruel.
﻿﻿
In regards to the murder case, the mystery isn't much of a mystery.  It frankly is too easy to solve, and for someone who works with numbers the fact that Wendell couldn't figure this out makes him not as sharp as we're led to believe.  Further, there are things that aren't answered.  Wendell is suppose to have this powerful effect on women, but we never learn exactly what it is.  It is clear from the story who the killer is.  In fact it's so painfully obvious we wonder why no one else thought that the most obvious suspect was indeed the killer.  Add to that the idea that killing Noelle off wouldn't have brought Jill any closer to the man she loved (and was ignored by).

﻿
One thing in By the Numbers that I found particularly galling was this exchange between Peter and Jared over whether they could show Karp and Infeld their methods to win the bee case (or what King called 'the Franklin & Bash').

Peter Bash: Can you teach a one-armed man how to drum?
Jared Franklin (looking a bit puzzled): Def Leppard.
Peter: I said one-armed.

Not only does it make Peter sound shocking ignorant (again), and comes off horrifyingly insensitive towards those who have lost limbs, it is a sad repeat of Captain Johnny, where in a similar bit Peter was not only unaware of basic facts (such as that Jesus Christ was a carpenter, not a fisherman like he thought He was), it was Jared who set him straight (which as a side note, is something we don't know Jared is).  How many times can we have the same bit without it coming off as almost parody?  I am no expert in rock, but even I know who Rick Allen is and how despite his disability he's kept rocking (I may not be a Def Leppard fan, but Allen has all my respect).  How Peter is this ignorant (Jesus was a carpenter?  There IS such as thing as a one-armed drummer?) and yet be this brilliant attorney is now flat-out beyond me.

Another thing that I found personally appalling is the Charlie-Peter relationship.  As is the case with any woman who comes across Gosselaar, Charlie pretty much gives in to Peter.  It is nice to see that Charlie mentions a daughter, but what I could not fathom was the idea that when she gets Tess for a weekend she finds it easier to leave her with a nanny so as to make out with Bash rather than tell Petey, "Maybe next week we can have dinner.  I want to spend time with the little person I gave birth to and don't see that often".   Here is a great conflict: the eternal man-boy confronted with a real dilemma: the threat of fatherhood and its responsibilities.  It is one thing for Charlie not to introduce her daughter to her latest potential baby-daddy, but it does seem a bit much to accept that she would be almost casual about leaving the child she doesn't see that often with someone else while she goes schtupping her next-door neighbor.

Granted, here is where I would differ from Charlie.  If I were in her situation, I would want to spend as much time as possible with my daughter, not with the girl (or guy in this case) next door.

At least one good thing came from this boring and dumb Franklin & Bash episode: the wall between them has come down.  King has rewarded the dimwitted duo by granting their lifelong wish to be together again.  Personally, I think she coddles them too much.  They aren't bright, they aren't responsible, they go out of their way to alienate as many coworkers as possible, they live only for their own gratification and have no real redeeming values.  However, they get the really big office. 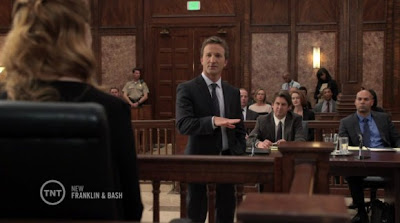 Finally, let me address a continuity error I noted while watching By the Numbers.  In the climatic examination of Jill, I noticed that Breckin Meyer's Jared (who tends to be the more vocal of the two) moved his hands a great deal.   In the close-up of Meyer, Jared places his right hand on his chest, but in the very next shot (a wider shot between Meyer and Tuck), it's his left hand that coming down.  How he switched hands from one second to the next remains unexplained.

I would call that lazy editing and/or directing.  Maybe there's a rush in production and not everything can be noticed or caught in time.  I will concede that.  However, the fact that the jump between right and left hand was more fascinating than the testimony or the story says volumes about By the Numbers as an episode.

No, for a show about lawyers, there is no justice in Franklin & Bash...