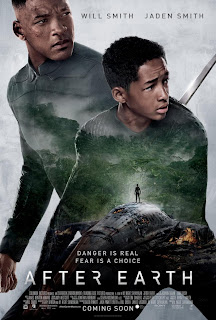 This is no Triumph of the Will...

After Earth, however, is a collective effort, where together they created a vanity project in a desperate effort to promote a star's child to 'star' status, someone who would probably not have a film career save for his family tree.  I don't know Jaden Smith, and he may be a nice kid.  However, he has been awful in all his movies post-Pursuit of Happyness (The Day the Earth Stood Still remake, The Karate Kid remake), so what made anyone think he'd be better in 'original' material.  This mad fixation of making Jaden Smith a STAR, an ICON, a LEGEND despite his limited (or almost totally absent) acting abilities is either Mr. & Mrs. Smith's way of easing their progeny into careers they might not want and are showing themselves unsuited for, or the oddest form of child (and public) abuse ever recorded.

Cypher Raige (Smith pere) is a Ranger General, one who has no fear.  As such, he is able to fight the Ursas, powerful monsters who strike their victims by sensing fear.  These Ursas are on Nova Prime, the planet that humanity now lives on after having left Earth due to their own destruction of it.

Cypher has a son, Kitai (Smith fils).  He is in Ranger Corps, but while his intellectual skills are high, he has too much fear within to recommend him to the Corps.  His fear stems from when his sister Senshi (Zoe Kravitz) was killed in front of him by an Ursa.  Needless to say (in what I can only call a cliché) Kitai fails to live up to Cypher's reputation and also needless to say Cypher, the stiff, impersonal father, does not think too highly of his son.

Would it be needless to say what happens next?  Mrs. Raige (Sophie Okonedo) urges Cypher to take Kitai on a training mission with a captured Ursa before his retirement.  Any guesses as to what could possibly go wrong?  Ship meets meteor storm, which forces it to crash, and everyone save Cypher & Kitai are killed (needless to say, one can't worry about the 'little people').  Cypher is badly injured in the crash (both legs), and the beacon that will send a distress message is broken.  There is another beacon, at the tail end of the ship, some thousand yards/miles/kilometers (I don't remember, just that it's many days journey) away.  Therefore, it's up to Kitai to go release the beacon, with Cypher watching him.

The rest of After Earth is spent between Kitai making a near mess of things and Cypher signaling his displeasure.

That might have been what was occurring between pere et fils during the making of After Earth, but I can only speculate.

No surprise, Kitai has to survive many things before finding the beacon, ending with struggling with that Ursa roaming about.  Pity Cypher is by now unconscious and cannot communicate with his son to show pride in him somehow overcoming his fear...

After Earth should signal two things: the end of both Jaden Smith and director/co-writer M. Night Shyamalan's careers as actor and director respectively, and as clear a message to Will Smith that people just don't care about his son and don't think he's anywhere as good as the father.  Unfortunately, none of them will get the message: despite a series of flops Shyamalan will still get hired, despite a series of flops Jaden will still get hired, and despite a series of flops (and damage to his reputation) Will will still foist his youngest son on us, determined to make him as big a star as he used to be.  There is something to be said about those with quixotic obsessions: the hunt for the White Whale, the Charge of the Light Brigade, the determination to make Jaden Smith a star (not an actor, but a STAR!).

It's difficult to not concentrate on the fact that Jaden Smith is Will Smith's son because if he were, say, Jaden Pinkett people would wonder why he was cast.  Jaden Smith, to his credit, gave it as good a go as he could, but he just could not act.  He could never make people care about his plight, and some of those things were beyond his control.  The flashback scenes which were suppose to establish his fear of Ursas were jumbled (as was a flat-out bizarre sequence where his dead sister appears as he floats along the river, culminating in her not-so-scarred face jolting him into waking) and there was nothing in the script (co-written with Gary Whitta) for our 'hero' to which to latch onto.

We never saw how good a Ranger he was (save for him jogging ahead of everyone).  We did get evidence of how inept he was as a Ranger (him going blind and nearly dying due to a poisonous leech will become a special source of mockery in showcasing Smith fils' 'acting').  One wonders what would have happened to young Kitai if Daddy wasn't around to guide him.  How was he ever declared a candidate for Ranger when he didn't appear to be able to survive a wilderness experience?

How was it that he managed to overcome fear when through all of After Earth he never showed any development in his character?  He hardly took any actions of his own free will until he 'confronts' Cypher about how he wasn't there to protect his sister.  Rather than showing anger and hurt, Jaden made it sound like a child complaining about not being taken to the Ice Capades ('You PROMISED!' one could almost hear Kitai say).

This is where some things were Jaden Smith's fault.  Kitai came across as whiny, dim, and almost bored.  I have now seen every Jaden Smith picture, and everything post-Pursuit of Happyness has him 'act' the same way: a near-permanent scowl, as if saying 'I don't want to be here'.  Jaden Smith is simply not experienced enough to carry the weight he was asked to, let alone the actual acting abilities.

A scene between Cypher and Kitai where Cypher is coldly giving his son instructions before leaving on his mission and Kitai reciting them is an especially painful moment to watch.  We see one person who can't act show he can't, and we see on person who can show that he decided not to.

In an even more bizarre decision, Shyamalan and Smith pere decided to make Cypher this stereotypical 'tough and disapproving father'.  As if to compensate for Jaden's stabs at expressing emotion (which he couldn't), Will decided to give Cypher not one drop of human emotion.  Hal 900 showed more emotion than Will Smith.  I KNOW Will Smith CAN act, so one could blame Shyamalan.  However, given that Will Smith is too experienced when it comes to his own performances to know what he is doing, I must conclude that Will Smith made the decision to make Cypher into a character who would never show anything close to any type of feeling.

This was his son, his only child, who was risking his life, and sometimes stumbling, sometimes succeeding.  Does Cypher EVER change his reaction?  No.  Throughout After Earth Smith pere growls at every opportunity.

Neither Smith showed a character that we could care about.  In the theater, there was more emotion shown over a group of dead baby birds than there was over either Cypher or Kitai.  That can't be a good sign.

After Earth also has some flat-out bizarre plot points and near-comical situations.  Earth now has wild weather changes, where a mass freeze can take place within a day.  I kept wondering how far the Earth had moved away from the sun for one location to undergo such massive climate shifts within a specific geographic area.  Kitai's voice-over was annoying (and having this Caribbean-like accent the Raige boys had didn't help, especially since Kravitz's Senshi didn't have an accent).  Wasting Sophie Okonedo as Cypher's wife in a few scenes where she added nothing to the plot was another misstep.

Finally, there was a moment after the crash where a plastic curtain kept folding and unfolding before us was at the most generous a trifle odd.  Was it meant to be artistic?  Was it even important (as were the allusions to Moby-Dick which were never actually used)?  The rhythmic opening and closing of the curtains made no sense, but then very little in After Earth did.  It just put the coda on the nonsense.

Will Smith had great plans for After Earth.  He envisioned a trilogy, perhaps spin-offs and certainly a vehicle for his son to become an action star.  I imagine that such lofty schemes now must be put aside, because After Earth is just awful: awful in acting (a surprise from Will, typical from Jaden, both giving not 'one-note' performances, but 'no-note' performances), awful in story (clichéd, dull, and incapable of telling an interesting story, let alone three), awful in special effects (at least for a hoped-for franchise starter), and just mind-numbingly dull.

After Earth has earned its reputation as the Battlefield Earth of This Generation.  Read that any way you want, but I read it as meaning that both are absolute disasters that will go a long way in damaging the reputations of those involved.  At one point, Cypher tells his whiny kid, "Do exactly what I tell you, and we'll survive."  I wonder if this is the Smith Family Motto...