The Noir Dreams That Destroy...

The Asphalt Jungle has one element missing in it that keeps it from being pure film noir.  There is no femme fatale, no alluring and dangerous woman leading our hero into ultimate destruction.  Having said that, The Asphalt Jungle is still noir in its dark imagery and themes of desperation, the criminal underworld, and the world-weary antihero who, like almost everyone in the film, years for the light but cannot escape the dark.

The Asphalt Jungle is also highly influential in modern-day crime drama in its 'heist-gone-wrong' story.  Almost all films with this scenario, down to Reservoir Dogs and Heat, owe a great deal to John Huston's gritty tale of the city.

Dix Handley (Sterling Hayden) is a hooligan, getting through life in the big city via petty crimes.  He yearns for the cleanness of his Kentucky farm, one that was lost in the Depression.  His ultimate goal is to leave the city and go back to his farm, but for that he must dirty himself through crime to get the money.

As it turns out, an opportunity comes his way through an unexpected source.  Dr. Erwin Riedenschnieder (Sam Jaffe), a criminal mastermind, has just been released from prison.  As all brilliant criminals, he has spent his 'forced retirement' cooking up a brilliant heist: a jewelry robbery that he has thought through and planned to perfection.  He needs, however, backers and a crew, and for that he turns to Alonzo Emmerich (Louis Calhern) a 'respectable' attorney who is involved in criminal activity.  Emmerich and The Professor are brought together by Cobby (Marc Lawrence) a simple-minded bookie.  Cobby also helps the Professor come up with a crew: a driver, Gus (James Whitmore), a safecracker, Louis (Anthony Caruso), and a hood.  That is Dix's gig.

This heist will allow Dix to go back to the purity of Kentucky, and it might also allow Dix's friend Doll (Jean Hagen) to accompany him, even though Dix has not given any indication that he has any feelings for Doll (despite her obvious feelings for him).  With Emmerich's funding, the crew commences.  However, the wily and desperate Emmerich has a few tricks up his sleeve.  For one, despite his wealth he has no money to fund the project, so he borrows some from the weak Cobby and decides to double-cross the Professor and crew, keep the jewels, and fence them himself.

Things, however, don't go as planned.  In the actual heist Louis is fatally injured and a security guard is killed.  With people hunting everyone down, Emmerich attempts to keep the jewels but his ineptness (along with Dix's intervention), force him to try to keep his side of the bargain.  Dix however is injured in the struggle.

With the police hunting down the criminals and zeroing in on the Professor, the lives of all of them quickly collapse.  Emmerich tries to establish an alibi via his mistress Angela (Marilyn Monroe) but he is discovered, escaping justice through his own hands.  Despite the Professor's suggestion that he keep some jewels to make money off, Dix decides to leave, with Doll forcing him to take her with him.  The Professor himself almost makes a getaway, but his obsession with young girls brings about his own downfall.  Family man Louis meets his own end, and Dix does make it to Kentucky, but does not make it (if you get my meaning). 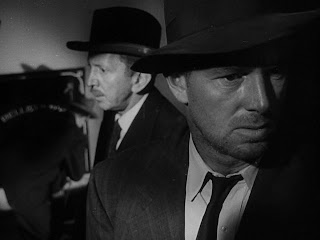 The Asphalt Jungle is a brilliant film in its understanding of all the character's motivations: their greed, their cynicism, their faults, but also their sad and tragic hopes to escape the world they live in.  Huston and his co-writer Ben Maddow (from a novel by W.R. Burnett) do not make any judgment on the type of people the characters are.  In a brilliant counterpoint, near the end of the film the Police Commissioner (John McIntire) tells the press that these people are the dregs of society, and especially the hooligan involved in the caper.

Of course, The Asphalt Jungle shows that far from being a cold, amoral being, the hooligan Dix is actually a good man forced into doing bad things in order to survive.  We see that he hates the city, hates the dirtiness of both his surroundings and the criminal work he has been involved in.  Dix's fixation on his boyhood home, the dreams of his youth, the longing for his family and the cleanliness of Kentucky (the symbolism he places on the innocence of the past and its distance from the corrupt city, especially corrupt to the human soul) show that if not for some bad turns of fate, Dix could have been an upright citizen.

His total inability to see anything beyond the darkness extends to Doll.  She clearly loves him, is willing to do anything for him, even risk her own future in order to stay with him.  He cannot see it, which makes this aspect of The Asphalt Jungle all the more tragic.

The Asphalt Jungle has some of the best performances of a noir film that I've ever seen.  Sterling Hayden may be best remembered for his turn as the insane General Jack D. Ripper in Dr. Strangelove or his small role as the corrupt Captain McClusky in The Godfather, but in The Asphalt Jungle he brings a pathos and sense of inevitable tragedy to Dix.  Hayden brings a world-weariness to Dix, someone who dreams to escape but who perhaps in his heart knows he never will.

Equally excellent is Hagen, who is actually not on screen much.  We see the love she has for this fallen man, who perhaps similarly could redeem him with her love, but who in the end cannot save him.

All the other performances are so well-crafted.  Jaffe is brilliant as the methodical, slightly unemotional Professor, a man who thinks his ways out of trouble.  The screenplay allows the Professor to have some of the wittiest and cutting lines.  When Cobby tells him that a certain police detective is all right, the Professor replies, "Experience has taught me never to trust a policeman.  Just when you think he's all right, they turn legit."  The fact that Jaffe's Professor remains cool under all circumstances (except when he falls for a teenage girl who delays his escape with his fixation on her dancing) makes one admire his demeanor.

One also feels for Lawrence's Cobby, whom we know is getting played but who doesn't recognize that himself.  Calhern as the shifty lawyer is also excellent, and his end is similarly almost tragic (although less so given what a duplicitous fool he was).

The Asphalt Jungle was not Marilyn Monroe's first film, but it was her first important film.  Her part is small but it shows that Monroe was a legitimate actress.  Long before The Legend of Monroe took hold, long before she became a Sex Goddess, she was someone who could deliver a good performance as a minor character.  The Asphalt Jungle set off her career, for in later years advertising for the film would make sure to feature Monroe despite the fact that she wasn't in the film that much (the original advertising, if I understand correctly, doesn't mention her appearance in name).

We get not just excellent dialogue and plot in The Asphalt Jungle, but non-visual cues as to the corruption of the city courtesy of Harold Rosson's Oscar-nominated cinematography (one of four nominations, along with Jaffe's performance, the Huston & Maddow screenplay and Huston's directing).  The world of The Asphalt Jungle is a world in decay, crumbling, murky, on the verge of total collapse and despair, echoing the desperate lives of the characters.

The Asphalt Jungle almost plays like a documentary.  There is very little music in the film (despite having a score by Miklos Rozsa, one of the great composers of the Golden Age of Film).  There is  opening and closing music, but apart from music from the radio or records, there is no music.  It was a brilliant decision, giving it a 'you are there' feel.

The Asphalt Jungle knows the darkness of this world.  It doesn't make it look glamorous or pleasant.  However, it also presents these hoods as people: with families, with dreams, with hopes.  The fact that these dreams and hopes are done in by their own hands lends a greater tragedy to this noir picture.

"One way or another, we all work for our vices."  So speaks the Professor, and truer words were never spoken.  It doesn't matter whether the vices were evil (Emmerich's greed, the Professor's lusts) or good (Dix's dreams of his old home, Dolls' dreams of Dix), they all worked for them...and were done in by them.