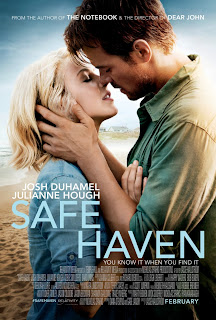 Even by the shockingly low standards a Nicholas Sparks novel has, Safe Haven is particularly abysmal.  Safe Haven has not one, but TWO stupid and illogical twists that are insulting to the audience's intelligence.  It also has a lethargy to the story and two amazingly boring leads who either can't act or can't be bothered to.

Katie (Julianne Hough) flees Boston after a brutal attack of some kind (the opening is a little vague) and boards a bus to Atlanta.  She flees Tierney (David Lyons), a persistent police officer determined to bring her in.  She eventually finds herself in Southport, North Carolina, and deliberately misses the bus to stay in this idyllic small town.  She quickly gets a job as a waitress at a local fish shop, a home at a safe distance from people (even if a woman named Jo--Cobie Smulders--lives close enough to start a hesitant friendship), and raises the attention of local hottie/widower Alex (Josh Duhamel).  Alex, who runs the bus stop/convenience store, has two children: adorable Lexie (Mimi Kirkland) and somewhat sour Josh (Noah Lomax).  For a widower he's quickly smitten with our lovely, who at first stays far away.

Soon, however, Katie starts thawing, and she and Alex quickly fall in love.  It doesn't help that she carries this terrible secret, but so far she's bonding with the kids and Alex.  However, the obsessive detective will not give up, and he sends out an APB for an "Erin Tierney" as a person of interest for a murder charge.  We now get the first shocking twist...

...the alcoholic Tierney is really Katie's HUSBAND!  Using his powers, he keeps searching for Katie, whom she had stabbed in self-defense as she fled into the night.  Eventually he is discharged for drinking on the job (disguising vodka for water), but not before he learns she took the bus to Atlanta.  With that in mind, he drives drunk down the Eastern Seaboard until arriving at the Fourth of July festivities in Southport, North Carolina.

Katie, having been discovered, at first attempts to get away, but on threatening Lexie she pretends to want to go with him to Boston.  Still too late, as Tierney has set Alex's business on fire, where Lexie is trapped in what was "Mom's Room", where among his souvenirs Alex keeps letters written by his late wife for future events (Josh on Graduation, Lexie on her Wedding Day).  Alex, who sees the building a'blaze while shooting off fireworks, comes to the rescue and Katie shoots Tierney in the struggle.

With the 'bad man/obstacle' out of the way, Katie and Alex can now be together.  Alex then presents Katie with a letter addressed "For Her".  It was a letter written by Alex's wife to the woman who would take her place, and no we get the second shocking twist...

...Jo was really the ghost of Alex's wife!

For the life of me I cannot understand how Nicholas Sparks can be so popular when all his stories are A.) so similar to each other and B.) trash.   I have become convinced that Sparks has a template which he uses with every story, changes a few things, and then releases it to his fans and eager film producers willing to make money off sap for saps.

We have a beautiful but troubled woman (usually a woman) who meets a beautiful but lonely man (usually man).  Someone in the lonely person's life has died (death is a powerful tool in Sparks' arsenal).  There tends to be adorable children (I don't recall any teenager children save perhaps in The Last Song, but since the younger set are the troubled and beautiful people respective I cannot be certain they were teens).  There also tend to be elders of one of the lovers, who offers either advise or words of wisdom as to the obvious attraction Lover A. has to Lover B. Eventually there will be lovemaking, which will be remarkably chaste. There is usually some obstacle to our lovers, almost always in the form of a 'bad man', someone who wants the beautiful but troubled woman for himself.  Eventually the 'bad man' does something criminal and meets his own demise, which will free the lovers to be united.

Oh, yes, one more thing.  This bucolic world will always be in the South and will be a sort of Aryan fantasyland where despite being south of the Mason-Dixon Line there are no black people to be found.  There may be the occasional African-American somehow wandering around a group shot, but as far as I know Nicholas Sparks has never had black lovers, or an interracial romance, or a major character in his books who is black, or Hispanic, or Jewish, or Catholic, or biracial, or anything close to ethnic.

I confess I find this aspect of Nicholas Sparks' ouvre to be the most odious.  The fact that he always portrays the South (where his stories usually take place) as this wonder-world of model-like figures where no color is seen is grotesque and illogical.  It would be as if one were to write a book taking place in New Mexico and have no Hispanic or Native Americans anywhere to be seen.  It is disingenuous at best, downright bigoted at worst.  I don't believe Sparks himself holds racial animosity.  He just is either uninterested or unaware that black people fall in love too.

﻿
Let us move away from the insipid nature of the plot (and one wonders whether any of Sparks' books are different one from another) and move on to other matters that damn Safe Haven to being one of if not the Worst Film of 2013.  Actually, I'm going to stay with the plot for just a moment.

We have what is suppose to be a 'shocking' twist: that Tierney is really Katie's husband.  OK, if that is the case, then truth be told Safe Haven makes no sense.  If she didn't kill anyone (and the opening suggests as much), then why would anyone follow through on his APB if there was no murder?  Furthermore, if she can prove that she acted in self-defense (which is quite easy to do) why would she have to flee from Boston to Southport?  Why not divorce Tierney or seek shelter with the relatives who gave her money?

Why not just say "my husband is a drunken bully who beat me?"  Once in Southport, she could have just told Alex this and I'm sure the hunky widower would protect our fair maiden even if somehow (as we are told to believe) he can drive drunk without attracting attention from Boston, Massachusetts to Southport, North Caroline.  Furthermore, wouldn't he have been arrested for issuing a false police report and abusing his authority as a police officer?

We also have the second shocking twist to deal with.  Never have we been given any indication that Jo is Alex's late wife.  The idea of a ghost working and befriending Katie is already insulting to the audience, but providing no suggestion that Jo is the ghost of Alex's wife is just a cheat.  Of course, for that to work we have to assume that despite his passionate love for "Jo" he would keep no pictures of her anywhere.  Otherwise, Katie would have seen the similarity to her friend.

However, Dana Stevens and Gage Lansky's screenplay (as lousy as it is, though I can't help feel nothing could have improved the terrible book which they adapted) can't be blamed for the universally awful performances from all the cast.  Former underwear model Duhamel (who I think did a good job in Las Vegas) was so stiff and emotionalless, striking the same one-note over and over again.  However, a quick turn on the dance floor shows he is ready for Dancing With the Stars, where his co-star Hough has excelled.  However, as a dramatic actress, Hough is equal to Duhamel's non-acting (as if neither believes the situations they are being well-paid to perform).  A particularly embarrassing scene is where Alex confronts Katie about the "Person of Interest" flyer he finds at the police station (which no one else in town bothered to see).  It was never believable and they were so stiff and unconvincing with each other, almost as if they were still figuring out what the words actually meant.

The children were horrid, Lyons was almost comical in his 'villainous' turn, and Smulders was convincing as a ghost because she acted as if she was dead.

If one is a fan of Nicholas Sparks' drivel, where beautiful (white) people in/from the South meet, fall in love, and overcome whatever obstacles a 'bad man' has for them while precious and precocious little children run around, then Safe Haven will work for you.  If however you have a functioning brain and aren't willing to suspend disbelief to where you are asked to accept idiotic nonsense as realistic or romantic, then you will find Safe Haven something to run from.