Agnes of God: A Review 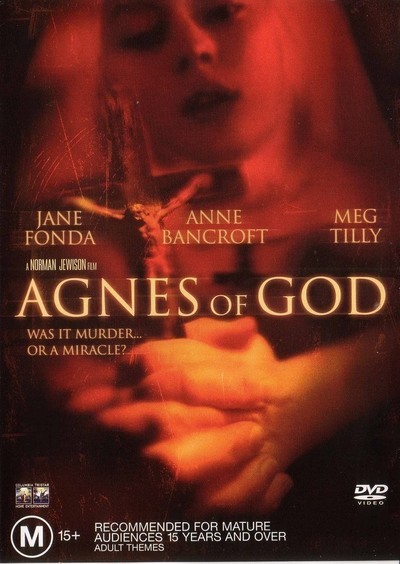 Agnes of God has many good qualities to it, well, to my mind, precisely two: Meg Tilly and Georges Delerue.  In other ways, it is a bit rushed and a bit muddled, but for myself I enjoyed it just enough to make it worth my time.

One night, in an isolated convent, a postulant is found bleeding.  The Mother Superior, Mother Miriam Ruth (Anne Bancroft), is shocked to see Sister Agnes (Meg Tilly) on the floor in such a shocking state.  Even more shocking is the dead baby in the wastebasket...apparently having been strangled with its umbilical cord.

What exactly happened on this night?  To investigate whether Sister Agnes is mentally fit to stand trial, the Quebec court enlists Dr. Martha Livingston (Jane Fonda).  The lapsed Catholic is still bitter about how the Church was towards her, her late sister, and the Church's attitudes towards her decisions (we learn when she visits her Alzheimer's afflicted mother that Martha has had both a divorce and an abortion).  Despite this, she agrees to investigate Sister Agnes' mental condition.

Dr. Livingston is shocked by the fact that Agnes has no memory of ever being pregnant, let alone giving birth.  Even more astonishing is her claim that she does not know how she became pregnant.  As far as Livingston can make out, Agnes has no knowledge of sex: both the mechanics and the pleasures of it.  It's as if Agnes conceived her child without her even knowing it.  Moreover, Sister Agnes is a woman who has visions and hears voices, one who is extremely devout in an unorthodox fashion.

Mother Miriam is no help to Dr. Livingston.  She is a woman of the world (having been married with children, and even grandchildren, before joining the order).  She is determined to keep Agnes an innocent, and is openly hostile to Livingston.  She also gives Livingston a surprising bit of information: Sister Agnes once had stigmata appear without cause.

The time of conception has been pinpointed to a particular date, but we still do not know how Agnes, an innocent nun isolated from everyone save the other equally reclusive sisters, got pregnant.  Over Mother Miriam's objections, Dr. Livingston gets the court to order a hypnosis.  Here, we learn that she is indeed the mother, and that someone else knew she was pregnant.  Under a second hypnosis session, we discover that Agnes claims that on the night of another nun's death (a nun she was close to), she went through a secret passage that the late nun showed Agnes, and there, she met 'Michael', who in Agnes' mind could have been God Himself.

To everyone's shock, Agnes' stigmata returns, and Agnes claims that God knocked her up.  In her shock and anger, Agnes strangled the newborn (the pregnancy being known to Mother Miriam, who is also Agnes' aunt).  The court finds Agnes incompetent to stand trial and instead of a mental hospital is confined to the convent.

Whoever actually fathered the child, be it human or divine, we will never know. I think that perhaps this is one of Agnes of God's flaws: the mystery pops in and out to serve playwright John Pielmeier (adapting his own stage play) own musings on the possibility of miracles.  After all, if we believe Sister Agnes, then her child's conception was the work of the Divine...one she rejects.  Yet at the end, if we believe Dr. Livingston, she, this hardened atheist, now has room for doubt regarding her own lack of faith.

You have a mystery (who fathered Agnes' child and was this conception something Agnes sought or not) mixed in with the idea of a miracle (or not).  If you look at Agnes of God as a mystery, it isn't all that big of a mystery.  Agnes had the child, Agnes was in the room when the child was found dead.  It isn't hard to figure that Agnes murdered the child.

The whole 'divine vs. human' debate Agnes of God would like to have doesn't quite come to fruition, or at least in how either Pielmeier or director Norman Jewison probably would have wanted.  However, the elements of Agnes of God that do work, work so well.   Those elements, as I mentioned in the beginning, are two.

The first is Meg Tilly's Oscar-nominated performance as the possibly deranged, possibly saintly Sister Agnes.  Tilly has an extremely difficult role: making Sister Agnes' intense faith something believable without making her seem downright bonkers.  Tilly kept that almost impossible balance between Agnes' innocence, almost sweetness and her more extreme reactions grounded without going all crazy.  Even in those scenes where she is some sort of mania (like when she is remembering her encounter that led to her pregnancy and the mass bleeding of her stigmata, Tilly never goes over the top or give in to the temptation to make Agnes a crazy person.  Instead, Tilly makes her a disturbed one, that mixture of naïve and ethereal into someone who could genuinely exist.

Bancroft, on the other hand, at times does go a bit hammy, her delivery deliberately too snappish and quick, with a bad tendency to make faces as a sign of her acting (her Oscar nomination notwithstanding).  Fonda, for her part, does great work with an underwritten part.  We get little hints of Dr. Livingston's life (the dementia-afflicted mother, her abandoning of her faith), but they don't go very far in exploring it.

The other simply brilliant element is Georges Delerue's Oscar-nominated score.  Haunting and beautiful, it is an elegant and soothing counterpoint to the insanity that surrounds the Convent of the Little Sisters of Marie Magdalene.

We also have Sven Nykvist's cinematography, capturing the beauty of the isolated convent and the intensity of the final hypnosis: the blending of the red and white frightening.

The mystery is never solved (I suspect that Agnes was raped...by a human, and in her state was unaware of what was going on save for the ecstasy she felt), and I think we are suppose to reach our own conclusions.  In that respect, we are left a bit frustrated, but in other aspects (Tilly and Delerue), Agnes of God is better than some of its parts.