Gotham: Into the Woods Review GOTHAM: INTO THE WOODS

What is amazing about Into the Woods, the seventeenth Gotham episode of Season Two, is that it plays like a series finale even though it has five more episodes to go.   You end Into the Woods wondering how they can possibly top this brilliant episode that throws so much at you. You get shocking revelations, the end of the beginning of a future super-villain, the growth of the future Batman, and one wild storyline that manages to mix Cinderella with Medea...and Bonkers Babs is Back!

Kind of makes the upcoming return of Mr. Freeze almost anti-climatic (though given Nathan Darrow is playing our favorite frozen figure, that is practically impossible).  Into the Woods continues to smash all expectations and makes for a brilliant Gotham episode.

Detective Jim Gordon (Ben McKenzie) is still on the lam, determined to clear his name and find out who framed him for the murder of a fellow officer.  Little does he know that the man behind the frame-up is a secret frenemy: GCPD Forensics Officer Edward Nygma (Cory Michael Smith).  Gordon is now essentially The Fugitive, though he still cannot help being the moral figure he is: saving a woman from a mugging though she isn't exactly thankful for the favor.

Eventually, he goes to Edward for help, but Ed's suspicious behavior (and Ed's ego about being oh so clever) give him away.  The tape that Gordon's partner Harvey Bullock (Donal Logue) got from Internal Affairs through methods too horrible to describe confirm it is Nygma.  "I knew that you knew that I knew," Nygma tells him before shocking Gordon, Nygma planning the detective's demise.  Gordon, however, manages an effective escape.

To help entrap Nygma, Gordon turns to his old friends, Bruce Wayne (David Mazouz) and Bruce's valet, Alfred Pennyworth (Sean Pertwee).  He even gets another frenemy, Selina Kyle (Camren Bicondova) to help in this dastardly scheme.  As can be expected, into the woods goes Ed, where he does the unthinkable...monologuing.

In other stories, Bruce and Selina have been working together in petty crimes, though Bruce, too honest, more often than not gives the stolen money away (always keeping just enough for burgers).  He even sews Selina's coat, explaining that Alfred has shown him that sewing is an important skill for a bachelor.  Once he helps Gordon, and learns that Lucius Fox has repaired the computer in the "not" Bat-Cave, Wayne abandons the streets, angering Selina. 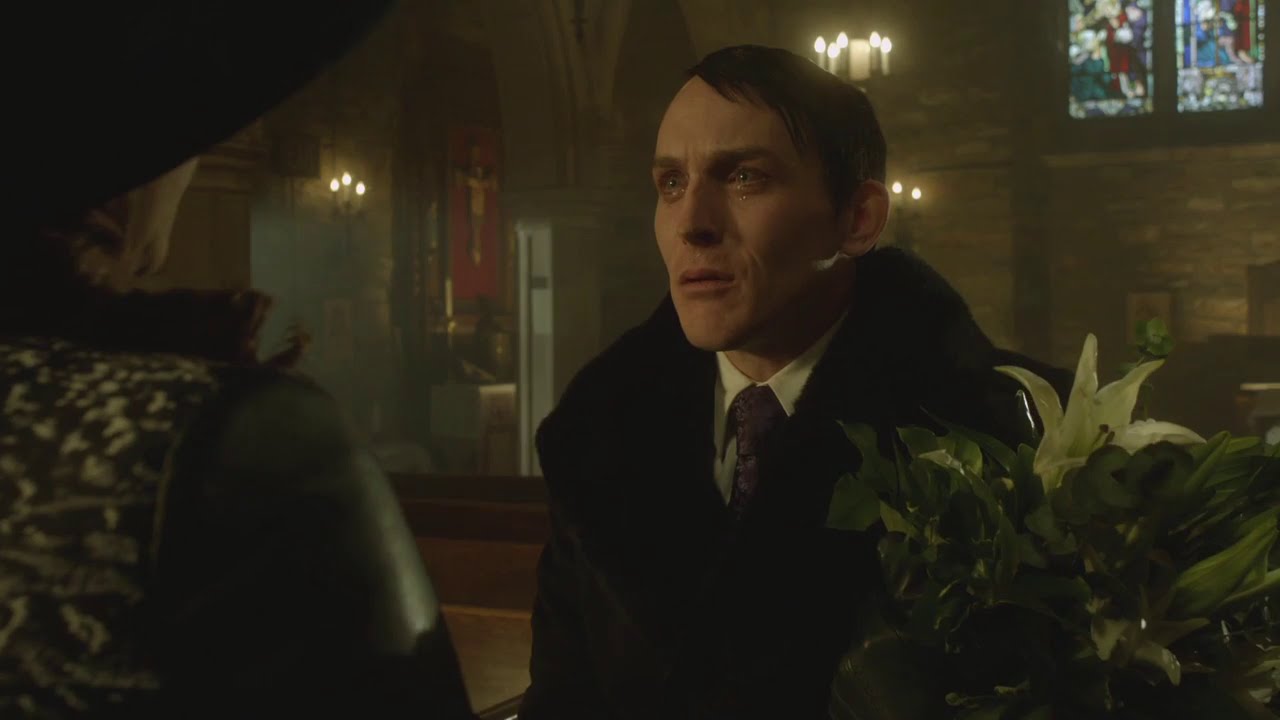 The other major storyline is that of poor Oswald Cobblepot (Robin Lord Taylor).  Mourning the death of his father, he is adrift.  His stepmother, Grace (Melinda Clarke) has no interest in Oswald, since Elijah Van Dahl never had a change the will and Oswald is illegitimate.  However, he IS Elijah's biological son and Grace fears he could make a play for the Van Dahl fortune, a clever enough lawyer being able to make a case to his rightful inheritance.  Fearing the sweet, naïve Oswald may finally wake up, Grace decides the best thing to do is to keep him on...as the family servant.

Grace and her children Sasha (Kaley Ronayne) and Charles (Justin Mark) delight in torturing Penguin-Ella, abusing him physically and emotionally.  The poor Oswald is at a loss about how to react, given all the evil has been taken out of him thanks to the weird experiments of Dr. Hugo Strange.  However, Oswald discovers that Grace murdered his beloved father when he accidentally comes across the poison, giving it to the dog to verify his suspicions.

At the next family meal, Oswald serves two types of pot roast to a disinterested Grace, who thinks both taste the same.  He assures her that one of them is more tender than the other.  Grace first notes something is slightly amiss when Oswald makes the sarcastic crack that the pot roast beats "my slut-mother's goulash" (the exact term Grace had used to describe both Penguin's food and his beloved mother).  She becomes more alarmed when Oswald confronts her about Elijah's murder, calling frantically for her children. A gleeful, vengeful, and enraged Oswald Chesterfield Cobblepot then tells Grace that the second pot roast is more tender...because it is her daughter.

Grace is horrified to learn that she has literally eaten her own children...and more horrified to see Penguin take out a knife and stab her to death.  The last we see of Penguin is of him, caked in blood, with the dead Grace still sitting at the other end, the two pot roasts of Charles and Sasha cooling at the table.

Now, Selina, Bruce, Edward, and Oswald now are firmly set on their paths as the future Catwoman, Batman, Riddler, and Penguin...and throw in Barbara Kean (Erin Richards) showing up at Gordon's door, released from Arkham and allegedly sane.

Who here thinks she actually IS sane?

My goodness but is Robin Lord Taylor BRILLIANT!  The entire arc of his character from the criminal mastermind to sweet innocent to now sadistic horror has been a purely fascinating, incredible, and astonishingly perfect performance.  RLT had to go through a whole range this hour: from the devastated son to the put-upon servant to the vengeful Fury out to avenge his father's death.  Into the Woods with Penguin's story draws from Greek mythology in both having him pursue the wicked until they meet their appropriate fate and in the horror of a parent literally eating the flesh of her own children.

Into the Woods doesn't have to tell us specifically that Charles and Sasha are now cooked, and maybe he lied to Grace as a form of psychological torture.  However, the mere suggestion that there was cannibalism going on is shocking enough.  Given how brutal they all were to Oswald, and how devastated he was to bury the father he barely knew after seeing his mother killed before his own eyes, it would not surprise me that this act drove Penguin so insane that he probably did kill his stepsiblings and cook them.

It is to RLT's extraordinary range that he, even as one who committed such a horrifying act, can make him almost sympathetic.  It isn't as if Grace, Sasha, and/or Charles didn't deserve a particularly brutal form of punishment for their own barbarism.  However, one is left astounded by this act.  One is also left astounded as to how RLT made all this believable, and the evolution of Penguin in general. 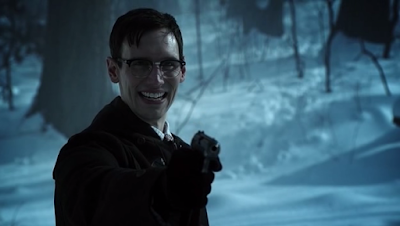 I also have to give credit to the other villain in tonight's episode.  CMS made the Riddler's revelation into a sharp and frightening one.  CMS is aided by Gotham's cinematography.  When he begins to pursue Gordon in the factory, the cinematography makes it look like Edward Nygma is emerging from Hell itself.  It's a frightening, apocalyptic vision that feeds off CMS' performance as the deranged yet oddly decent Nygma (when the GCPD sweep in to arrest Nygma in the woods, CMS has him run off in a non-criminal attempt, clumsy and inept, ending with him saying, "Oh, crud", when he falls on his face and is arrested.

Credit also has to go to every performance.  Clarke has that 'bitch virtuosity' so well-honed in The O.C. as the wicked stepmother, Mazouz and Bicondova work well together in that double-act that is Batman and Catwoman, and Logue puts in the comic relief as Bullock, who makes the ultimate sacrifice for his good friend Jim...sleeping with a very large woman at the IA office to get the tape that will help find who set Gordon up.

About the only flaw in Into the Woods was the idea of turning at least part of the episode into Penguin-Ella.  I thought that part was a bit cliché and overdone, almost something to expect.  Minus that, however, Into the Woods astounds in the story and in the performances (particularly by Taylor and Smith as the Penguin and future Riddler).  Into the Woods was a knockout of an episode, and now the pressure is on to wrap up Gotham Season Two into another successful effort.

Next Episode: Pinewood
Posted by Rick at 5:31 PM