The Tree of Life: A Review

THE TREE OF LIFE

It would be remarkably easy to do a Terrence Malick retrospective since in his entire career, he's only made five films (Badlands, Days of Heaven, The Thin Red Line, The New World and now The Tree of Life).  Two of those films (The Thin Red Line and Days of Heaven) have received Criterion Collection releases, but so far as I'm concerned, the only Malick film I've seen is The New World.  I thought it was good, though a bit slow, but it has been quite a while since I've seen it.

Now with The Tree of Life, Malick has chosen not to make a film, but a visual poem.  However, I'm not saying that as a compliment or an insult.  It's just that The Tree of Life, while certainly with some simply beautiful cinematography, in terms of a narrative, a great deal of it doesn't make sense, except perhaps to Terrence Malick.

The Tree of Life I found is a film that will try many an audience's patience.  At the screening I attended, I counted eighteen people walk out.  By any standard, having such a large number walk out on a film, especially one as highly-praised as The Tree of Life, is especially troubling.  Most of the people who walked out did so at a certain point in the film, and I'm going to take a guess here, but I think they walked out not because they were offended by what was on the screen (although maybe some of them felt their intelligence was being offended), but instead because they frankly were bored.  However, more on that later.

Let's see if we can give an overall plot to The Tree of Life, which I argue doesn't strictly have an actual plot but is more a cinematic meditation about "deep things". Basically, it is about a family: a loving but strict father (Brad Pitt), the perpetually quiet mother (Jessica Chastain), and their three sons.  In The Tree of Life, we are shown that one of them has died young, and this leads to a crisis of faith for the oldest son.  Somehow, this son, Jack grows up to be Sean Penn.   In the midst of all this we have a very long (and yes, strange) interlude about evolution as creation, where the life of the O'Brien family is intertwined with the beginning of the Earth, right down to dinosaurs wandering in what appears to be the same meadows that the O'Brien children will traverse all these millenia later.

That's as good a wrap-up of The Tree of Life as I can give, because I cannot emphasize enough how this is not an ordinary film.  This isn't a film that has a straight beginning, middle, and end, with scenes that appear to relate one with another.  Rather, it brings back to mind what I understand Proust's Remembrance of Things Past to be in that one thing can lead to another with only memory connecting them.  What The Tree of Life is in fact is a meditation on how the cosmos (and/or God) is uninterested in the lives of mortal men, how it moves on without taking note of the misery and pain even the most loving person can inflict.

If only it were done better.

Here is my beef with The Tree of Life: no matter how often I rail against this technique, filmmakers (including Malick) confuse pomposity for profundity, conceit for insight.  I especially hated how so much damn voiceover was delivered in whisper.  Oh, why do people think that when you whisper dialogue, you are expressing wisdom to rival The Sermon on the Mount?  Endless amounts of whispering (almost all of it from Chastain) to where one almost took the whole thing as parody.  So much whispering is bad enough, but when it is done as voiceover (and longtime readers know how I feel about voiceover in general), it becomes virtually insufferable.

Adding misery to The Tree of Life is Malick's near-pathological obsession with moving the camera left right center up down in out all around.  Throughout the film, there were few moments when we got a still, steady shot.  It was almost as if Malick figured he spent all that money on his Steadicam, might as well get his money's worth.  If The Tree of Life had been filmed in 3-D, people would have had to have walked out because they would have been so nauseated by the constantly swinging of the camera the entire theater would have erupted in vomiting.

Of course, the instability of the camera work is just a reflection of the instability of the film itself.  No pun intended, but we are never grounded within the story of the O'Brien family except in a few brief moments (curiously, those moments when Malick puts the camera down or at least isn't so crazy with it).  In fact, throughout The Tree of Life I don't think any names were used (save Jack, but how he came to grow to be Sean Penn one never learned; perhaps we didn't need such details).  Even when trying to establish some sort of connection (in one scene, we see the adult Jack appearing to be in the same room with the younger version of his father) the camera moved so that we could never get a clear idea of whether this was a memory or fantasy or what-have-you. 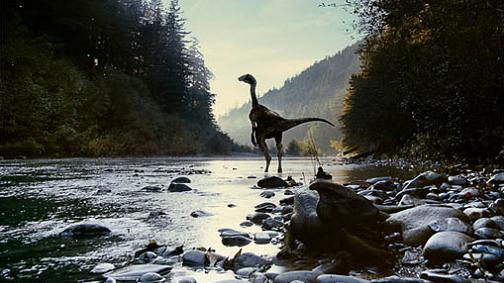 Curiously, a lot of The Tree of Life was spent on a lengthy, lengthy, lengthy recreation of nothing less than the Earth's creation.  This was when the majority of the eighteen people walked out; by this point in the film they'd stayed with it as long as they could but I figure they couldn't tolerate not having approached anything resembling a narrative...with dialogue...that was spoken by people with their lips.

If one had wandered into The Tree of Life at this juncture, you would not have been blamed for thinking you'd come to see a nature documentary called The Tree of Life.  Now, I can say I get it: Malick is tying in that light that opens and closes The Tree of Life to whatever we can imagine to be God and how He stands removed and remote from human life (although I'd argue that theme was tackled far better in underground films like RAN or The Seventh Seal).  Just because I understand what Malick is saying doesn't mean I'll declare it a work of genius.

Instead, one becomes almost bored with how he can't get past trying to tell us how important his themes, his film is.  It ends up not being inspired but insipid.

I won't throw away the good with the bad.  Emmanuel Lubezki's cinematography is simply beautiful and it would be amazing if he didn't win an Oscar for it*.  The imagery of the creation (from the light in the distant sky right down to the dinosaurs that appear so natural in the film) is so lush and, yes I'll say it again, beautiful, that it almost makes me want to see it again.

Another positive is Brad Pitt: he showed the Father figure as someone who loves his sons deeply but who also will brook no dissension from his strict child rearing.  We get a motivation of sorts for his endless frustration (a talented pianist/organist, he admits to wanting to be a great musician but as he puts it, getting sidetracked).  It's one of Pitt's best performances, and the best of the film.  That can't be said for Penn, who really has nothing to do in The Tree of Life except to walk around in a barren land.

In the end, we see Jack wandering around where all the people from his past come around him.  I wondered, 'Are they in Heaven?  In his mind?  In 8 1/2?'  To my mind, it was impossible to divorce Fellini's cinematic ending to that film from Malick's version of it in The Tree of Life.  It looked like he was trying to do something similar to how the Italian film ended (except for the dancing).

I understood its ambitions, but it only ended up frustrating, self-indulgent, and self-absorbed.  Granted, there were good things in it (including the use of Smetana's The Moldau as part of the score, although when you use that music to poor effect it should be a cause of concern to how good a film actually is).  However, other than Lubezki and Pitt's work, I find The Tree of Life to be an exceedingly irritating film (especially for its two hour nineteen minute length).  When the credits finally rolled, I heard a voice from the audience call out, "All right, it's over".  I was surprised to realize that voice...was mine.

*Update: The Tree of Life lost Best Cinematography to Hugo.