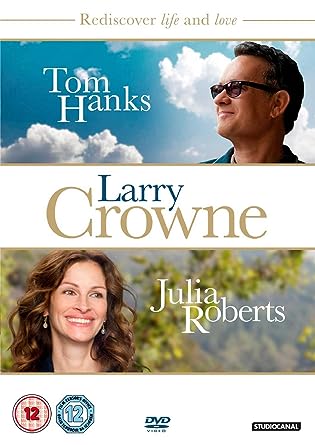 In these times of economic turmoil, fear, and insecurity, when many Americans sense the world they live in and will leave behind will be worse than they one they were born in, we have Larry Crowne, a film that I figure attempts to remind us that with a song in our hearts and a sense of joy, we will overcome.  It might have worked, but there is such a massive attempt to be whimsical and endearing that by the film's end, you don't care how this extremely predictable film concludes.

Larry Crowne (Tom Hanks), is a joyful fellow, always happy and optimistic.  He goes through his day at the U-Mart with a happy heart: cleaning up the parking lot, gathering the carts, putting everything in order.  In short, he's a happy man within his little world, and has been rewarded eight times as Employee of the Month.  He is called into the break room, believing it will be Number Nine.  Alas, it is not to be: because he does not have a college education and despite his 20 years in the Navy, he cannot advance any higher, and thus, he is fired.

Devastated, he wanders a bit until his neighbors Lamar and B'Ella (Cedric the Entertainer & Taraji P. Henson) advise him to go to community college.  With that solid piece of advise, the ever-chipper, ever-optimistic Larry signs up for three courses.  One is an Economics course taught by Dr. Matsutani (George Takei), the other, a Speech course by Mrs. Tainot (Julia Roberts).  While Dr. Matsutani revels in the power he has and I would argue, is slightly divorced from reality, Mrs. Tainot is totally burned out.  It's clear she doesn't want to be there, but be there she must, especially after Larry Crowne shows up just in time to stop the class from being cancelled due to a lack of minimum number of students.

Well, now with Larry in class, we meet a group of I figure whimsical characters.  We do get a few tidbits about them: Steve Dibiasi (Rami Malek) is a sweet but extremely dumb kid, Lala (Maria Canals-Barrera) the shy woman, and Talia (Gugu Mbatha-Raw) the free spirit who, surprisingly, is even more upbeat and cheerful than Larry.

As Larry gets his groove back, with a little feng-shui thanks to Talia, a brief romance between Larry and Mercedes emerges, but one she quickly puts down.  However, by film's end Larry now has let go of all the remnants of his old life, works on-call at the cookhouse owned by his friend Frank (Ian Gomez), and at last, the ever-optimistic Larry and the formerly morose Mercedes can be, well, take a guess. 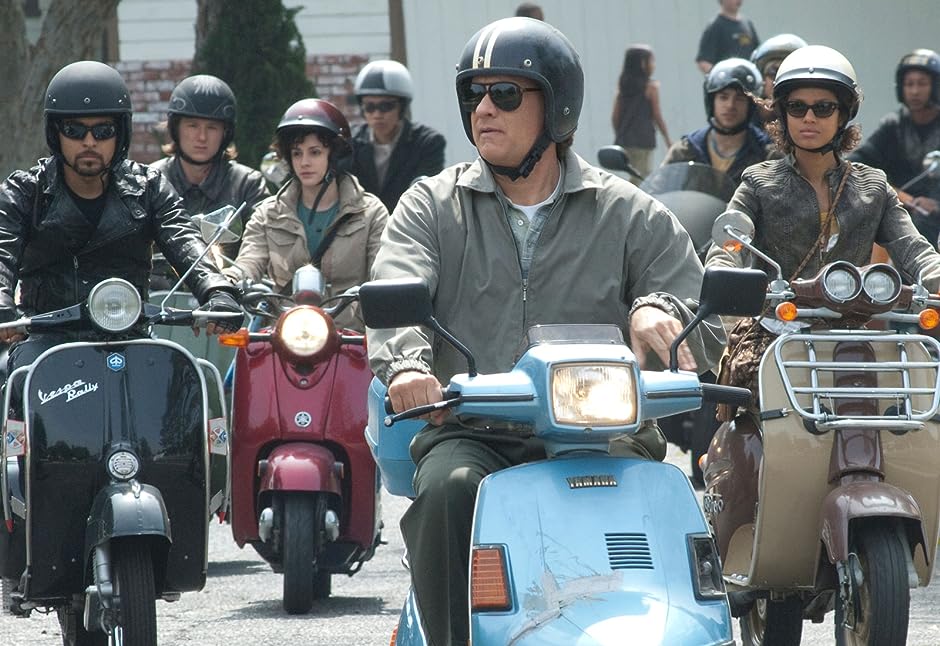 With not one, not two, but three flops to her credit, what would possess two-time Oscar winner Hanks to believe she could spin a story into gold besides a personal friendship with him and his wife, the part-Greek Rita Wilson?  The more I ponder it, the greater the possibility of Personal Reflections on Vardalos, but now I digress.

Suffice it to say Larry Crowne under the screenplay by Hanks and Vardalos suffers from far too much sugar and not enough protein.  Our lead character is suppose to be so endearing, so sweet, so lovable, so Tom Hanksian, that we're suppose to automatically root for him simply because he's just so gosh-darn pleasant.  However, even in the opening montage, as Larry merrily rolls along at the U-Mart, I kept thinking 'wow, he's always happy, almost imbecilicly so'.  He's suppose to be this giant ball of sunshine when he really just comes across as annoyingly chipper, the kind of person whom one ends up disliking because of his upbeat disposition.

Another simply dreadful scene is when Larry is 'inducted' into the "scooter bike gang".  Here's Don, all decked out in leather, looking all tough, staring down our sweet man-child.  He then starts snapping his fingers, and shortly after, every member of 'the gang' follows suit.  When Larry, a bit hesitant, starts to snap his fingers with everyone snapping in rhythm, he now is officially in.

As I watched this, I honestly thought Don and his crew were about to start, "When you're a Jet/you're a Jet all the way/from your first cigarette/to your last dying day..."  Scenes like this are just downright stupid, not sweet, and to my mind, it amazes me that neither Hanks or Vardalos didn't say to each other, 'maybe this is a little too much, even for Larry Crowne'.   If this be sweetness, let it be sour.

If you want to address a surprisingly serious premise like in Larry Crowne (a middle-aged man losing his job and in a sense, his identity) you need two things to be truly successful: a sympathetic lead and a realistic scene.  Here, you have neither.  When Larry is let go, we've seen him enough at work in the opening credit montage to actually dislike him and feel nothing when our Eight-Time Employee of the Month is terminated; anyone who is so joyful, almost cocky, about his job prowess that when he's addressed by his last name he smiles while drinking his coffee and points to the crown on the mug is almost asking to be punched.

Those who did the firing appear on screen to be almost giddy with glee to see Larry go.  They certainly aren't taking any of it seriously: one of them, Jack Strang (Ron Riggle), offers him the last slice of pizza right after Larry's been fired, and another makes jokes about how thanks to his degree he and not our beloved hero, managed to move up.  I figure when anyone is let go, it is not a happy moment, but one handled with restraint and with a certain decorum.  By trying so hard to be funny, Larry Crowne ends up being painfully unfunny, almost cruel. 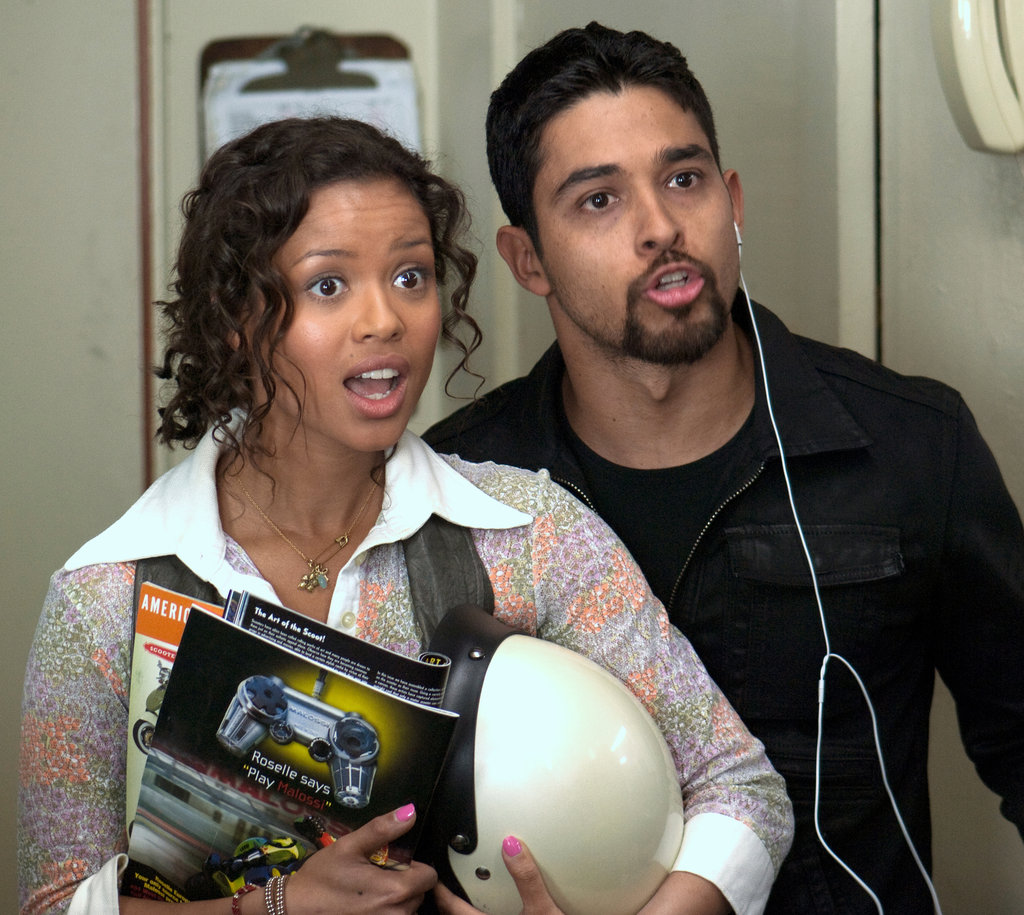 Another big problem is in the film's desire to be so damn cute and whimsical.  All the characters save Mercedes are quirky (even though we hardly see anything of the other students save Talia), and those we do see border on insipid.  I especially had an issue with free spirit Talia.  As portrayed by Mbatha-Raw, Talia is annoying, not endearing, in her eager willingness to make-over Larry, right down to renaming him "Lance Corona" (FYI: Corona is Spanish for 'crown', oh how I love the wit) because in her words 'it suits him better'.  She's always chipper, always eager, to where she doesn't become believable.

I also need to mention Cranston as Julia Roberts' loutish husband.  His performance,aside from being bad and unbelievable, appeared to be a cross between Malcolm in the Middle's Hal and Breaking Bad's Walter.  Like the former, he appears to be an idiot, clueless about how his behavior may be bad.  Like the latter, he appears to be a dangerous man capable of violence.

I digress slightly to point out one last thing with the screenplay: it really is two stories in one film.  The first part is about a man in his forties/fifties who suddenly finds himself unemployed.  That thread is almost forgotten in the second part: the romance between student and teacher.  Once Larry gets a job as a cook using his twenty years as a Navy cook as experience, we do see him study, but we never see him seek employment of another type.  I thought that was the reason he went to college in the first place.

It seems like Hanks & Vardalos slammed two stories together and opted to use one to segway into another.  Worse, if this film is about the positives of higher education, it is disingenuous to have Ever-Chipper Talia drop out to start her own business.  Either getting a degree, even an Associates, is good or bad: it cannot have it both ways.   The one thing that was realistic is that probably most college students have no idea who Benjamin Disraeli is. When asked, Steve said Disraeli was someone from Israel; how clever.

Side note: maybe I'm bragging, but I not only know who the Earl of Beaconsfield is, but that George Arliss won an Oscar for his portrayal of Prime Minister Benjamin Disraeli in Disraeli and that he was the first and so far only Jewish-born leader in Britain.

We should move on to our leads.  It's something to be said about Larry's termination when it is badly acted. I didn't believe for a moment that Larry was truly devastated, and  it was oddly reminiscent of another scene where a character played by Tom Hanks was fired: that being Philadelphia.  I blame it on the directing, but since Hanks directed himself, it doesn't make it any easier to say.

Roberts is still a Pretty Woman, but her lush who finds renewed joy in life and teaching thanks to the sunny optimism of Larry Crowne never works.  If she were smart, she would have left Dean long ago since it's clear they don't like each other and have nothing holding them together.

Larry Crowne appears to be channeling Forrest Gump in trying to have the audience love this extremely sweet, affable character who only appears to want to please and spread a lot of joy to those around him and make them better people.  However, the film fails because it doesn't know the difference between endearing and irritating, because it has thin characters who serve little to no purpose, a plot (or plots) that is (or are) remarkably boring, and the idea that Tom Hanks shaking his ass at me is the highest point of comedy.

Really Tom, you had someone dress up like a Star Trek character and you couldn't work Sulu into the scene?

* Few people have made not just an entire career, but an entire industry, out of milking their heritage as much as Nia Vardalos.  It's one thing to be proud of your ancestry, it's another to use it to shamelessly promote yourself and create a good number of reviled projects (example, My Life in Ruins).  It's almost as if she never loses an opportunity to remind us she's of Greek ancestry.  Therefore, if she's going to be excessive in her proclamation of being Greek, I fail to see why I shouldn't be excessive in proclaiming her Greek heritage either.  Let us remind you, Jennifer Aniston is part-Greek, yet she never goes on about it the way Vardalos does.
Posted by Rick at 6:03 PM